Since the fall of Gaddafi, an anarchic state has risen from the ashes of civil war and now Libya is a fertile ground for slavery.

” What did I do to you”? these are reported to be the last words Muammar Gaddaffi is said to have bellowed as he was being led to his death. Gaddafi, Libya’s authoritarian leader since 1969 died in Tripoli, humiliated and begging for his captors to spare his life in 2011, after more than 40 years in power. His death came months after a United Nations Resolution which authorized member states ” acting rationally or through organizations to take all the necessary measures to protect civilians under threat of attack in the country”. This was after months of a civil war between forces loyal to Colonel Gaddafi and those seeking to remove him from power.

When then  United States Secretary of State, Hillary Clinton received the news of Gaddaffis death, she is said to have  exclaimed “wow”. A NATO force mainly made up of French and British forces helped tip the scales in the rebels favor, who ultimately executed Gaddafi. Little did she know then, that removing Gaddafi  without a comprehensive plan to build Libya’s institutions and transition towards a democratic state were the rule of law is respected, would ultimately result in the rise of an anarchic state,  years of civil war and a humanitarian crises.

Anarchy after the fall of Muammar Gaddafi

Whilst Colonel Gaddafi was viewed as a villain in the West, many could argue that he was the authoritarian leader that held Libyean society together. After Gaddafi left, Libya was embroiled in five years of a bitter civil war and ISIS has been expanding rapidly into the anarchy that has engulfed Libya.

A civil war between warring factions such as the militia coalition, the Libya Dawn, which controls Tripoli, and the elected parliament in Tobruk  has been continuing since 2014. The economy has been destroyed, and at least half a million people have been internally displaced.

Karim Mazran, a resident senior fellow at the Atlantic Councils Rafik Havivi Center for the Middle East, argues that Libya is far worse now then under Gaddafi, criminality is sky-rocketing, there is insecurity and it is almost impossible to find employment. And what has now shocked the world is the Slave Trade that has barely been making headlines.

Time Magazine reported that  African refugees and migrants use Libya to cross the Mediterranean Sea, there are thousands of refugees and migrants who pass through Libya each year. Because there has been a crack down on migrants crossing the Mediterranean sea by The Libyan Coast Guard which is funded by the European Union and Italy, there are now between 400,000 to at least 1 million people now stuck in Libya. 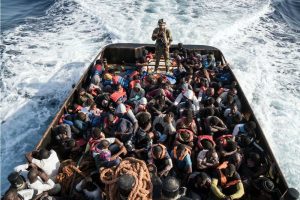 The United Nations Human Rights Agency, reported that conditions in the detention centers are horrific. These centers are incubators for rape and murder amongst migrants, and migrants become victims of being sold off as slaves. 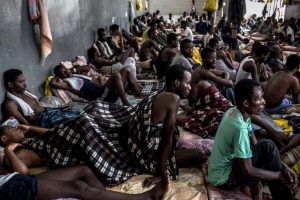 These migrants are fleeing conflicts and poverty, but end up being caught up in the most unimaginable nightmare of being sold off into slavery, becoming valuable commodities to be bought, sold and discarded when they become worthless.

Because Libya is considered a failed state, this trading of human beings continues largely unabated. Libya lacks rule of law and this is the main reason why the Libyan Slave Trade thrives which is aided by the large influx of mostly Nigerians has led to a situation where stranded men and women are sold into prostitution or slavery.

So who is buying slaves in Libya?- A migrants account

Moussa Sanngo, one of the migrants who managed to fly back to Ivory Coast, was sold to work in the fields, and survived severe lashings from his slave master. He said that ” for the Arabs, black skinned men are nothing but animals- animals were treated better”, said Sanogo after spending atleast four months trying to get to Italy by boat.

Sanogos description of Libya is one of a lawless, country, and he claims even the police are involved in the slave trade. He says he was once caught by people who claimed to be police and sold him for US$365 to a man who made him work forcefully in a tomato field for a month. Sanogo also spoke of abuse, and says that they were hit constantly with sticks and metal until blood flowed.

What is being done and what can I do?

Slavery is a violation of Human Rights, and for it to be taking place in a modern world is truly regressive and this generation should never allow such an atrocity to be repeated.

There are a number of organizations that have been working in the country to assist those stranded in Libya, The International Organization for Migration has been assisting in flying immigrants home. You can also assist by donating to anti-slavery organizations such as the Free the Slaves, End Slavery Now, and the Polaris Project can help those working to end slavery world wide.

You can also give support to the UN Refugee Agency, the World Food Program, and Save The Children which are involved in putting an end to the root causes of slavery such as extreme poverty and displacement.

It is also important to speak out and do some research on avoiding ‘supporting’ slavery by having knowledge of the products that you purchase, where they come from and the conditions that they are produced under. Let us also not be silent on these issues and let us raise awareness through social media platforms. This you can do by simply sharing this blog post to your twitter or Facebook. Bad things happen when good people are silent, let us not be complicit in the suffering of others!