Who has been in Thailand or lived there, will have noticed the amount of waste wander in the environment, especially in the urban areas. Where does all this waste come from? Does it have a negative impact of Thailand environment? Does it ever go away? Is there a sustainable solution? These are some question that could rise up in your mind, when you are walking through a street filled with trash.

Where does all the waste comes from?

The Thai government is talking about municipal solid waste (MSW), this is the waste produced by households, commercial companies and is collected by the government. Next to that, there is hazardous waste (hazardous waste refers to waste that is dangerous to humans, animals, plants and cause environment and property degradation) that consist of industrial waste, hazardous substances and infectious waste that is produced communities and industries.

These two types of waste covers all registered waste by the government.

An important big part of the municipal solid waste is plastic waste. The Thai people are one of the largest plastic users and then in particular plastic bags. In each store you get a plastic bag for 1 one or 2 products, even for you delicious Frappuccino you get one. Thailand uses around 70 billion plastics bag in one year. 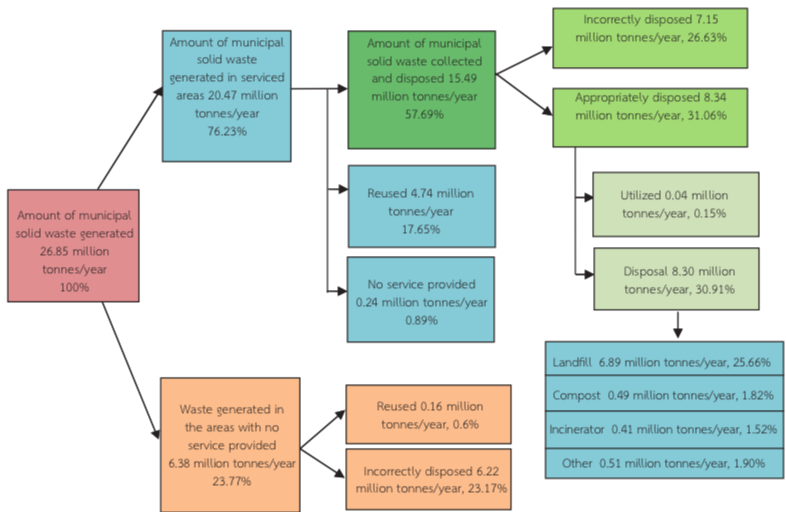 Does it have a negative impact on Thailand’s environment?

The non-correctly dispose of waste has its impact on the environment of Thailand, besides walking through the nice streets of Bangkok and seeing garbage everywhere you look. Or there is a beautiful piece of green environment, filled with garbage. The non-correct dispose leads to water pollution, the sewers are full of garbage, that flood every time it rains in Bangkok. The garbage is also not contributing to the smell of some of the urban areas. Next to that, the incorrect of dispose of waste leads to severe environmental problems.

Plastic waste gets often dumped in the sea, the 23 coastal provinces of Thailand around one million ton gets dumped combined of these 23 provinces. Thailand is together with China, Indonesia, the Philippines, Vietnam and Sri Lanka on of the major contributors these countries combined are responsible for 60% of plastic pollution in the oceans. If we take a closer look how plastic is impacting the environment, from the one million ton of trash that is dumped in the sea, 15% of it are plastic bags,7% are straws and cigarette buts are 5%. Besides ocean pollution worldwide, animals die from trash in the sea, around 150 sea turtles, 100 whales and dolphins and 12 dugongs die from trash in the sea, and half of them die because of eating plastic. 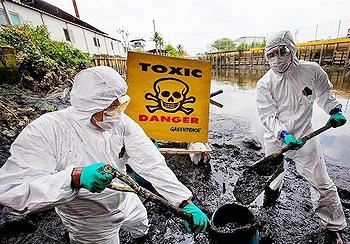 The production and use and thus the waste of hazardous substances have an negative influence on the environment,  cause pollution and cause contamination when they are not disposed correctly. Many waters and rivers get contaminated  by these hazardous waste, for example the Chin River showed that 52 out of 96 water samples were contaminated. Contaminated water causes also bad health and birth of humans. There are examples, that children are born mental or fysical incorrect.

Does it ever go away? Is there a sustainable solution?

The Thai government have plans to eventually have better controlled dispose centers for solid waste, such as 75% of the MSW needs to be correctly disposed by end of 2021 and 100% of the residual waste need to be disposed by the end of 2019. However, who knows how long it will take to eventually have it all sorted, if the annual waste in not growing faster than the current government plans. The Thai government could invest in education about the waste management problem. Therefore make people aware, to minimize the generation of waste and maximize reuse and recycle of waste.  Maybe it is an idea to place garbage bins in public, because I see hardly one when I walk through Bangkok to start with.

You might noticed that some water bottles have a small plastic cap covering the bottle cap, these capes make up to 520 tones of plastic garbage a year. A few big water bottlers already stopped with using the plastic caps, because there is no hygienic health risk. The PCD is aiming to have them all removed by late 2018. This is not a plan to get rid of all the waste but is an movement in the right direction that could mean something.

Hazardous waste will be there always with export, import, producing and transporting. The government has plans to deal with this in the future, 30% of community hazardous waste must be correctly disposed by the 2021, 100% of infectious by 2020 and 100% of hazardous industrial waste must be in an waste management system. Next to that, we can reduce the waste at the source. Map all the hazardous waste, so appropriate laws, plans, standards can influence the management of this waste. Furthermore, research to waste disposal technologies how these could help in the waste management system.

What can you do yourself?

Soruces used to create this blog.