During my trip in Thailand I was wondering if this is also the case here in Thailand or would it be totally different? So let’s find out!

In this blog I’m focusing on the Netherlands and Thailand its common lifestyle. How a daily life in both countries look like and what is “normal” to do with your future. During the blog I will do a lot of stereotyping, this because every individual is living their own life on their own way but nevertheless in every country the individuals have a lot in common when it comes to a daily life, raising kids and how to behave. This post is not about receiving answers but about questioning why some things are the way they are.

First I will talk about gender equality. Now are you wondering what this has to do with a daily life, well a lot. Gender equality represent how people behave towards each other and if it is acceptable for differ genders to behave the same as the major society and gender. In the Netherlands, male and female are according to the law the same. Within society this is not always the case. The EIGE (euro gender) has given the Netherlands a score of 72.9 out of 100. The EIGE is critical towards Holland because the past decade Holland is not making any progress when it comes to gender equality. Can this be caused by the social acceptance of the major society?

Holland is dealing with a performance society at the moment. This means that students have to put a lot of pressure on themselves to differentiate from their peers and then there is the part of being scared to be judged that what are you doing is wrong. Social acceptance of the society is having a lot of influence on the future of the individual. I don’t know why but there are some expectation of every individual that they have to fulfill like, at the age 30 you should already been more or less settled down. When I’m talking with my friends about the future most likely it is going about at which age they want to have children, and also almost every women I talk to wants to work less to raise their children. And I’m still wondering why this is considered as normal?

The past 5 years it became popular for film producers, actors, philosophers, writers and influencers to question the “normal” and write inspiring quotes about it. But how are you going to manage this and what is exactly choosing your own path? 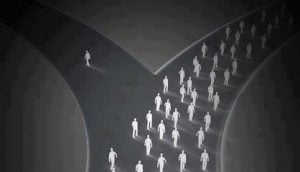 Thailand is one of the best in the world when it comes to gender equality of CEO’s in the business industry. 49% of all the CEO’s in Thailand are female. That’s a lot right? However, on social level it is the complete opposite. Imagine that the same female CEO is still taking care of the children at home, clean, cook and taking care of her family without any help. This is socially accepted. However, due to  the fact of more upcoming women movements in Thailand, it is shifting.

What I have experienced during my trip is that family is way more important than a job, for example. Respect towards your family is also playing a large role within the social acceptance and so is acceptance of your parents.

Surprisingly Thailand is also dealing with a performance society. A  Thai friend of mine told me that a lot of student are trying hard to get in good companies. This also means that you have to graduate from a  well- known university and at least you need a bachelor’s degree. For the Dutch readers, sounds familiar right? However Thailand is slightly more extreme. Companies are having camps to select the fresh graduates. What will happen is that Thai students really need to differentiate themselves and they “fight” each other for the  better spot in the company.

Expectations about common age to get married and having kids is not really clear. When I’m looking around it is quite similar to what I see in the Netherlands.

So, the similarity between Thailand and the Netherlands related to common expectations and the performance society is high. Freedom to choose in terms of career path is supported by various  institutions that are available. Which allows especially for young people the freedom to choose their career path and owning up to the  expectations of the societies they are living in.

The past 5 years it has become popular for many to questioning the “normal” life. So what is the other side of a normal life?

That is not my responsibility to answer. With my 21 years of life experience, I’m still struggling to find the right way to live. If I am  ever going to find it will be a mystery. What I hope you will get out this, is a realization or even one little insight into which way your life will  be headed to.

Feel free to leave a comment about if you have gain insight.