You have to taste a culture to understand it – Deborah Cater.

Clocgs, windmills and tulips, it is one way to look at the Dutch culture. Another point of view could be Amsterdam, which has been linked to weed and partying. But is this typical Dutch culture, or is one just stereotyping this way? This could be argued. Rise, temples, buddha’s and “the land of smiles” is there more to add when one thinks about Thailand?

This blog will set the record straight on prejudges of the Dutch and Thai culture. I myself am a Dutch girl who will explore the Thai culture for the coming 10 weeks. The opportunity to do so arises as I will be studying and living in Bangkok. This made me realize that I will live amongst the locals and will experience my daily life as they do. Therefore, I am very interested getting to know more about the culture and to see how this differs from my own and where the similarities arise.

Let’s start exploring the Dutch culture. When stereotyping the Dutch, foreigners often say that the Dutch population is stingy. But when looking at the facts, when the Dutch people are going abroad, they spend a big amount of money on tips to thank the person who served them. When looking at the stereotypes mentioned before, the clocks are one of the first to discuss. It is most rarely that one would see anyone walking on clogs in the Netherlands, it is more special when one would see it. Then about the windmills, there are a lot of them in the country, but some other countries own even more. Which is not a weird plan as windmills are a great way to gain energy. Another topic to discuss are the tulips, the Netherlands is not the only country with these flowers but has a great land and climate for them to grow. When the flowers blossom, they create a beautiful picture which attract the tourists. (Silver Media,n.d.)

Within the Dutch culture, freedom of speech is one of the most important values they comply to. One can give their opinion about anything they want, even if they talk about someone from the royal palace. The Dutch are direct but also keep in mind the feelings of the other person to not be too offensive. Another important thing is women’s right, which has been fought hard for in the Netherlands to become at the status as it is now. Before 1960, it was expected of women get married and stay home to raise the children and take care of the household. Nowadays, women can pursue a career and have the right to study as much as a man would have. (Silver Media, n.d.)

The Netherlands consist of a flat setting with a lot of green fields were farmers produce food on. There are churches in the country some older or more stunning then the other, but one will not see them around every corner. (Raets, 2009)

When greeting a Dutch person, there are multiple ways to start this communication. First, one can just wave and say hi. Another possibility is to shake hands to get to know each other and the third option is to give three kisses on the cheek. These are all polite ways of greeting someone. Of course, it differs from when you would use which way as friends would meet each other differently then people in a business environment (Stichting opvoeden, 2018).

~Being raised as a Dutch girl~

From my own perspective how I am raised, I can state that I am raised in a very open and comfortable environment. All though my parents got deforced when I was still young, this didn’t influence the way they raised me. I was able to talk to my parents about anything at any time without being judged or put down. I have never felt uncomfortable to talk to them about anything and i also have a younger brother who wants to help me whenever he can.They all want to support me in any way possible and when I needed advice they would be there for me. Furtermore, I have worked in a more informal but also formal environments which taught me to adjust to any situation with what is asked.

The country of ‘The thousand Smiles’, of many incredible temples, nature and many religions living amongst each other. These various features make Thailand a very fascinating country. Although, it is juggling between poor and rich, it is already well on its way of improving its economy. Many franchise such as Mc Donald’s, KFC and Spar already have taken their place in this state.

Having a look at the flag of Thailand, already illustrates the most important values of the Thai culture. The flag consists of the colours red white and blue. Red represent the inhabitants, white for the religion and blue for the Thai Monarchy. Within the Tai culture, the monarchy is highly respected and seen as a great influence of the states wealthy. Thailand’s population lives up to the Lèse-Majesté Law which states that it is illegal to demonstrate any negativity towards the monarchy. Talking about the mentioned point of views earlier, rise is one of the most important things within this country. It plays such an important role that in the Thai language the word for rise and food is the same. The Thai cuisine is very broad and internationally popular. Rise is eaten in mostly all dishes but can be made in all different forms, plane, sticky or for instance fried. When dining, a fork and spoon are used to eat with, but noodles are often eaten with chop sticks. To show that one is full, leave a little bit of food on the plate as when everything is finished this indicates that one is still hungry. (Commisceo Global Consultancy, 2017).

~A peek into Thailand~

The area of Thailand contains of various sides as it has mountains, caves but also beautiful beaches and islands. Many temples can be found and huge buddha’s cover the wide view when looking around the area as Buddhism is a big influence on the Thai culture (Nahabedian, 2014). 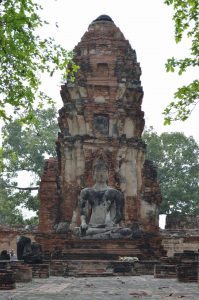 A traditional way to greet people in Thai is the Wai. The Wai is made up by one putting their hands against each other and slight bow with their head. To greet with a Wai shows respects to the person one is meeting. While communication with another, hand gestures may be used to enhance speech but never in an aggressive way and always acted in a calm manner. The Thai are gentle people, calm and often kind of shy which need to be approach in a gentle way. Communication is done on a low volume. The Thai are there also indirect, they don’t want to offend people, so they will only give hints, but the other person needs to figure out for themselves what their true feelings towards them are. Losing face, by expressing one self angry or offending someone stands for a great shame in the Thai culture. Therefore, the population doesn’t express their emotions often openly (Commisceo Global Consultancy, 2017).

When preparing for my time in Thailand, I started to think about my expectations/prejudgments. One of my first expectations is that I will be able to visit a lot of temples and nature parks. Besides that, I expect to eat a lot of rise with every meal and that I should adjust to the spicyness of the food. Also one of my expectations is that the country would differ from my own in cleaniness. I do not know much about the Thai culture according how they raise their children or how the communication will be so that is one thing to find out. I am very excited to experience all the differences in the country and hope to stumble upon some similarities as wel! I hope i will be able to see the city as my home for a while and to learn more about the culture and specialties.

And now it begins..

I am very excited to start this journey of unexpected situations in unkown places on my own but also together with fellow students/friends. Hopefully I will learn to view things from different angles and to use these insights for the better in the future. As this is my first blog, it shows a start of understanding the two countries but without an actual visit to Thailand. In the upcoming blog this will be added to see the differences. The second blog will consist of the process and experience of me being in Thailand for 8 weeks. I hope I have made you all curious with this first piece and hope to bring an answer on your questions in the next one!

Please share your own experience with this country or a similair journey in the comment part below!

Getting to know each other

Small world. (n.d.). After all its a small world. Retrieved from http://afterallitsasmallworld.com/