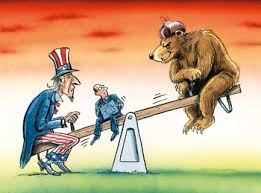 Russia versus the USA. We all know the history of the cold war, where the two superpowers terrified the world with their threats and soft power showcases. What really interests me is how these superpowers, who are so different from each other, get their money for their wars and other big expenses like military power and technology improvements. These countries are still in conflict, whether it is about oil, the Syria crisis or Asian affairs. In order to gain allies and maintain the relationships with their allies, they need money for diplomacy, gifts (most of the time in the form of military support) and propaganda. But my main question is, why do these super powers need each other? Is the world safe without one of them, or maybe even both?

During the 1980s, Jeff Lynne from Electric Light Orchestra produced an album called “Balance of Power” in which he refers to the cold war. The headings I use, are songs from that album which are (still) capturing the essence of the current situation.

Secret Lives
On almost every aspect of the society, Russia is different from the USA and the other way around. Especially now with Mr. Trump as president who is a very straight to the point, no diplomacy kind of guy. Putin, a really short but smart man (ex-KGB, so probably a criminal), uses his intelligence and experience with other presidents from the USA to gauge Trump. The close relations with North-Korea and the Rocket Man (Kim Jong-Un for those who lived under a rock a couple months back) are frowned upon by Mr. Bigger Nuclear Button in the White House. Russia has a history of very strong leaders, the Tsars, who took country and land when they wanted to and were literally terrorizing their own country. They got their power through fear. This still happens in Russia, where the occasional opposition leader is just sent into oblivion. The contestants of power in Russia just disappear. In the USA this does not happen, not that we currently know of atleast, and power is gained through intense lobbying, massive and expensive campaigns and big bold (populist?) slogans.

Heaven Only Knows
Also the economics are way different in both countries. The USA has big multinationals all over the world, just look at the hospitality industry; Hilton, McDonalds, KFC, Marriott and InterContinental. When I asked around the only multinational Russian company people could name was Gazprom. This is one of the biggest gas companies in the world and guess what, over 50% is owned by the Russian government. The Russian government directly gets money from this company through taxes and through profits. That is a big chunk of money, according to their annual statement, with a profit of 3.4 billion dollars a year. This is not enough to run a normal country, but definitely money which comes in handy. The USA gets money through taxes. Death and taxes is a saying and the Americans definitely put it into practice. 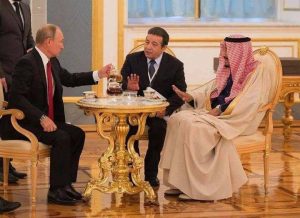 So Serious
How different these superpowers are, is also shown in their international politics. Russia and the USA have a veto in the United Nations council, where they are permanent members. If one country wants something, the other could veto that and the other way around. What happened in 2017 was that Russia used its veto to end an United Nations investigations regarding chemical attacks in Syria. Russia does not want the UN to find out that Syria is chemical attacks, or at least, Russia does not want to know if Syria uses chemical attacks because Syria is Russia’s ally. Russia claimed that the US and its partners are seeking to dishonor Russia. The United States on the other hand vetoed when the UN was calling for the withdrawal of Trump’s recognition of Jerusalem as Israel’s capital. The US vetoed, because “the US won’t be told where it can put its embassy”.

Sorrow About To Fall
What would happen if one superpower would defeat and / or invade another one? If Russia would not have to deal with America, they would go and establish their power further and further. Putin would gain more power and would become more stricter. The world would tremble before the fear autocracy of Putin. According to NATO Russia was already planning a Baltic invasion in 2017, therefore not dealing with the states would make Russia more enthusiastic about invading some more countries.
If the USA would not have to deal with Russia, they would (just like the good ol’ days) start invading the non-democracy countries and they would start spreading “freedom”. So what really happens when the balance of power disappears or starts to fall apart is one country/leader starting use his power on the rest of the world. This is also where the United Nations come into play. Putin stated about the United Nations that the purpose of the veto right, which the permanent members have, maintains the balance of power. I agree with the fact that the veto right is important to maintain balance. If the veto right disappears all the countries voting with the USA or against the USA could have an impact on the balance of power. Especially because there are more western countries than Eastern/Russian focused countries, this veto is one of the cornerstones when it comes to the balance.

Endless Lies
Although after Glasnost & Perestroika from Gorbachev the Russian government has become more clear, Russia needs to make clear where they get their money from and how they get it. The rumors about influencing several elections around the world are slowly becoming facts, something the Russians understandably deny, and are not helping the Russians with their already corrupt and bad reputation. So in order to be able to defend their veto right Mr. Putin should be more clear about his actions and 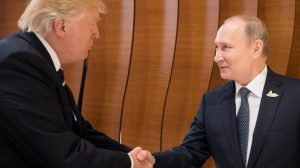 influences on western elections and his intentions in the future. On the other hand, Trump should be more clear about his intentions with Russia. He claims he wants to cooperate with Russia, but constant name-calling is not going to help in their cooperation. Also the lies from his staff contacting Russia during elections and after elections is not helpful for his own reputation.

Is It Alright
What would’ve happen if one of these superpowers did not exist? No one will know, but what we do know is that these superpowers balance each other out. They create competition and make sure that the other one does not overpower the rest of the world. This is also why the veto right can sometimes be annoying for the surrounding countries/citizens, but it creates the balance. Who should you support? You can decide that for yourself, however by supporting one country do not rule the other one out. Let me know your opinion in the comments!

NATO Tells Europe: “Prepare for a Russian invasion”. Who Are the Most Dangerous Russians in the World Today?