Little introduction; since this is my first blog. I am however very well known, but just by my friends and family. I (Merrijn) Am a 23 year old student who officially studies in Holland (Hospitality management) but currently studying in Bangkok (International Relationships). One of the first things I noticed when I arrived in Bangkok was the pollution in the air. There is always a grey layer of smog hanging. I hoped to be able to contribute to a better air quality, but this seems very hard to do, so I decided to inform my new readers about it. Please enjoy reading. 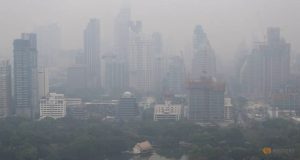 On Thursday the 8th of February the air pollution control department of Bangkok gave a warning for unhealthy levels of certain matter in the air which do harm daily life. This is not a new phenomenon for mother earth. Lots of cities around the world are dealing or trying to deal with this problem. However Asia is the one who is having the most problems with this occurring event.

According to the world Health organisation (WHO), in 2012 6.5 million people died because of air pollution. Because of this, WHO calls air pollution “A public health emergency”.

The air pollution department of Thailand reported “2.5 microns or less in diameter (PM2.5) ranged between 72 and 95 micrograms per cubic meter of air”. In January it hit a maximum of 213 PM2.5 Since no one understands what just had been reported, a bit of elaboration.

Polluted air is determined according to the EPA (environmental protection agency) standards. Those standards determine polluted air by particles that are smaller than 2.5 microns per cubic meter.

Do not expect to be able to start counting the pollution around your own house, microns are not visible for the naked eye (for indication: A red blood cell is 6 microns big). So if you are not an owner of professional equipment, you will not be able to research the air around your own home.

So now we know where the micron diameter of PM2.5 stands for. Now we are able to tell How unhealthy the PM2.5 levels of Bangkok actually are. The company “Bliss air” produces this table to indicate when the PM2.5 levels are healthy, and when you are in an area where you actually shouldn’t  want to be. 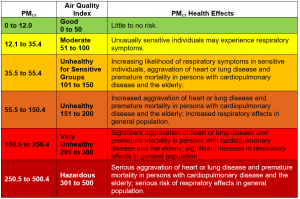 Obviously, Bangkok is in serious trouble right now. Just by spending enough time outside it is possible for you to pick up heart diseases or lung diseases and if you are lucky (obviously not) you will catch both of them.

So how much exactly did those 2.5 microns per diameter increase? Thailand state of pollution Provides us with a graph for how the PM2.5 levels were in 2015:

This leads to the question how those pm2.5 particles in the air has increased so dramatically. As everyone knows, Bangkok is one of the biggest touristic places in south east Asia (maybe in  whole Asia). Also the city itself contains (estimated) 9.790.000 citizens. This number does not include the many tourists in Bangkok. Both those citizens and tourists need and want to be transported throughout the city.

This need for transportations causes massive traffic jams throughout the city. Everyone who has been in Bangkok has been in several of them. If the government wants to do something about the air pollution they could start with working on those traffic jams (wait for it how they should).

Industry in Thailand (read Bangkok) is Steadily growing for more than 10 years. Thailand produces a lot of electrical products such as hard drivers, cars and motors. Because this growing industry, the growth of the air pollution by these companies grows too, with no end in sight.

So what is there to be done against the air pollution in Bangkok, or should just everyone leave it and come back in 100 years? Back in the 1990s Bangkok already faced air pollution. However in 2000 the blue sky returned back to Bangkok. This was because of the fuel that was used during that time. A part of the fuelling we use for cars and motor bikes always contains sulphur. In the 1990s this was 10.000 parts per million. 10 years later this was just 50 parts per million. This is an example of how this is no lost battle, just innovations have to been made and research needs to be done.

Thailand (and because of this, Bangkok) is an third world country (except for that it is being way better developed and way less people are living in poverty). Because of this environmental issues are not top priority within this country. However, since the smog is being such a big problem right now, the government should start working on policies regarding the environment.

Bangkok counted nearly 9.5 million vehicles in 2017 (busses, cars and motorbikes). This amount is increasing every year. There are several reasons for this increase in cars every year:

The government made a law for the Thai people that they would receive a tax discount when turning in their old car when buying a new one. This caused a massive increase in new bought cars (what was the opposite of what the government tryed to achieve), because people would keep this new car for a bit and will sell it after one year to receive this Tax discount.

Because of this increase in vehicles the PM2.5 particles increase too, whereas now to drastic levels. A good place to start for the Thailand government is to do something about the motor vehicles in Bangkok, but what can be done? 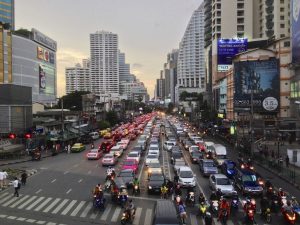 Personally I would advise the government of Bangkok/Thailand to invest more in the infrastructure. Me, currently located in Bangkok itself, see so many cars driving with just 1 person in it. This is for both owned cars and taxis, all empty. When investing in infrastructure, so much more people can (or should be able to) easily take a train/sky train or a bus to the place he or she wants to go. This would solve one big issue of the air pollution right now.

But then it seems the government is listening to me, even before I have postied this blog. Bangkok planned  to build 12 more rapid transit train lines. However, those train lines (mostly sky trains) will not be until 2029.

This will be way too late for Bangkok since the air pollution is getting worse and worse every month. Bangkok needs new ideas that are possible to be implicated right now. Me, still located in Bangkok itself, notes that there are none (read: Not one) electrical cars in Bangkok. This would help Bangkok a lot if they find a way to promote electrical cars. In 2015 Bangkok registered 300.000 new cars. If the government is able to sell only (mostly) electric cars, this will contribute to less poluted air in Bangkok.

Bangkok obviously has a serieus problem right now, with no easy solution. They are working on it for the long term, but that is not really solving anything right now. As I mentioned already, research needs to be done, where new innovations and solutions could help right now in the current situation.

As I have also tried to show you, it is hard to contribute something to the current polluted air situation in Bangkok as an individual. What Bangkok needs right now is a plan from the government on how to handle the situation (which is getting worse), and new innovations for this problem.

I hoped you enjoyed reading my Blog. There will be more follow ups to this post about more of the same of not. I would also like to hear what you think of my blog, so please let me know bellow in the comments. Hope I got your attention and in that case please follow (links below).