Many of us know that human trafficking is a huge problem, there are some good articles on this page about the topic to look up as well. But, did you know that animal trafficking is on the same scale as human trafficking? Did you know that it includes drugs, arms and organized crime? Or that it is massive global problem? If yes then I am super glad, if no then I definitely encourage you to read further because you might be surprised, at least I was when conducting the research for this post.

According to Cambridge Dictionary, smuggling is crime that takes goods or people into or out of the country illegally. Trafficking is the activity of buying and selling goods or people illegally (Cambridge Dictionary). Therefore, wildlife trafficking or smuggling means taking animals (live and dead) into or out of country and selling them illegally to another parties (Ahmed, 2017).
The most common or known wildlife trafficking is poaching elephants for ivory and tigers for their skin and bones (World Wildlife Fund). Yet, this is only the tip of the iceberg. Many other species are smuggled as well: monkeys, turtles, boas, rhinos, exotic birds, owls, jaguars, leopards, sharks(Ahmed, 2017). It is happening worldwide.

Parts from some endangered species are worth more than gold or cocaine.
(- The Economist, 2014)

The demand for rhino horn is high in Asian countries – especially in Vietnam – it has been used in Traditional Chinese Medicine for more than 2000 years. Nowadays, it is used as a status symbol which reflects someone’s wealth and success. (Save The Rhino, n.d.)
In Vietnam, the demand for rhino horn increased rapidly in the mid-2000 when a rumor spread that the powder of rhino horn will cure cancer (Guilford, 2013). There is no trace of that in the Chinese Medicine, however it can cure fever, rheumatism and other disorders (Save The Rhino, n.d.).
In 2013, the estimated price for illegal poached horn ranged from US 28,000 dollars to US 100,000 dollars per kilogram (International Trade Centre, 2017). While, the price of gold closed at US 1,204.50 dollars in 2013 (www.onlygold.com). 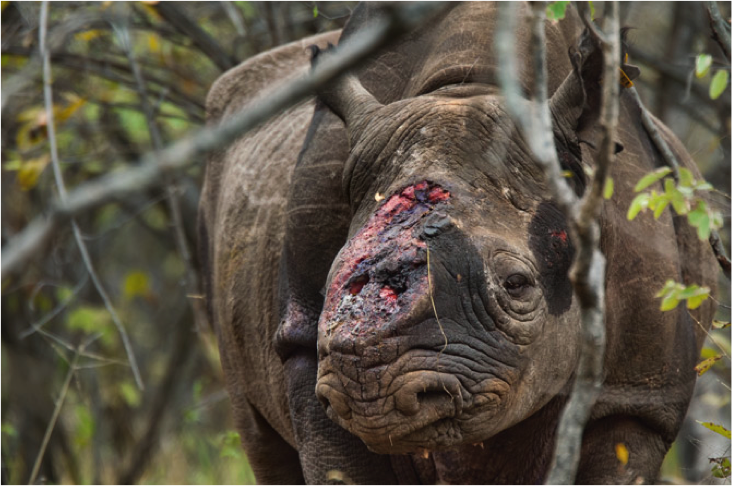 Animal smugglers can be either gangs or organized crime groups to individuals. For instance, a 33-year old man named Jeremy James smuggled baby iguanas from Fiji to US in his prosthetic leg (LA Times, 2007). An organized crime group with machine guns slaughtered hundreds of elephants in Africa (Goldenberg, 2012). Furthermore, there are different types of people with different interests. The main reason is to make profit but there are also people who want to have something that is rare, having pride for the ownership (collectors) (Vice, n.d.).

The rarer something becomes, the more valuable it becomes and the more people want it. (-Catherine Bearder, 2016)

Southeast Asia has been called one of the hotspots for animal smuggling, meaning it is a key supplier for the international market. The volume and diversity of traded and consumed species is up to very high levels, the biggest consumer of wildlife is China. Sadly, wildlife is currently being extracted from the regions tropical forests at six times than the sustainable rate. (Felbab-Brown, 2013)
The main routs of the animal trafficking can be seen below. 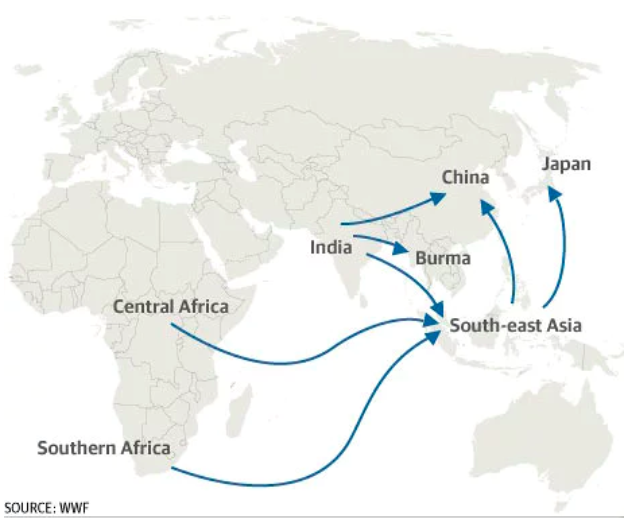 Source: The Guardian, data from WWF

Thailand has the world’s largest unregulated ivory market, and is home to one of the world’s largest and most active ivory carving industries (World Wildlife Fund). Also, Thailand has a lot of available land and water transit points and poor enforcement so it is perfect for illegal wildlife trade (Reyland, 2011). Moreover, the Chatuchak Market in Bangkok, has been recognized by the World Wildlife Fund as a hot spot for illegal animal trade. Since, I study here in Bangkok I definitely wanted to check it and do a little investigation for this blog. Surprisingly, the first thing I saw when I entered were big signs against illegal wildlife trade. 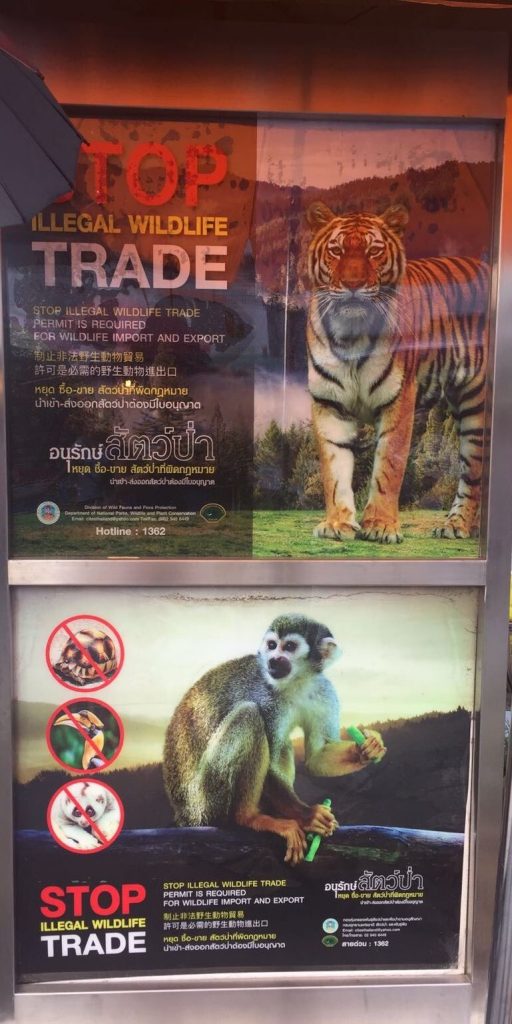 On the pet section, the majority of sold animals are dogs. From puppies to big ones. But, there were also cats, parrots, lizards, marmosets, fish, turtles, scorpions, flying squirrels etc. It was sad to see them because clearly they aren’t treated as they are suppose to, I could tell by how they looked – no bird should be attached with a chain, big dogs and rabbits (not little bunnies, huge rabbits) should not be in tiny cages. I did not pick up any illegal trade going on but I believe if you ask from the right people they can organize anything. You just need to know what to ask and from who. Three guys sitting behind the bunny cages with big cold changes on their necks seemed definitely the ones who knew the business but I did not want to put my nose where it does not belong to. Furthermore, I saw a woman who sells real crocodile skin bags for 1000 euros and a man who is taxidermist (stuffs animals – taxidermy) and does mainly exotic birds and butterflies. 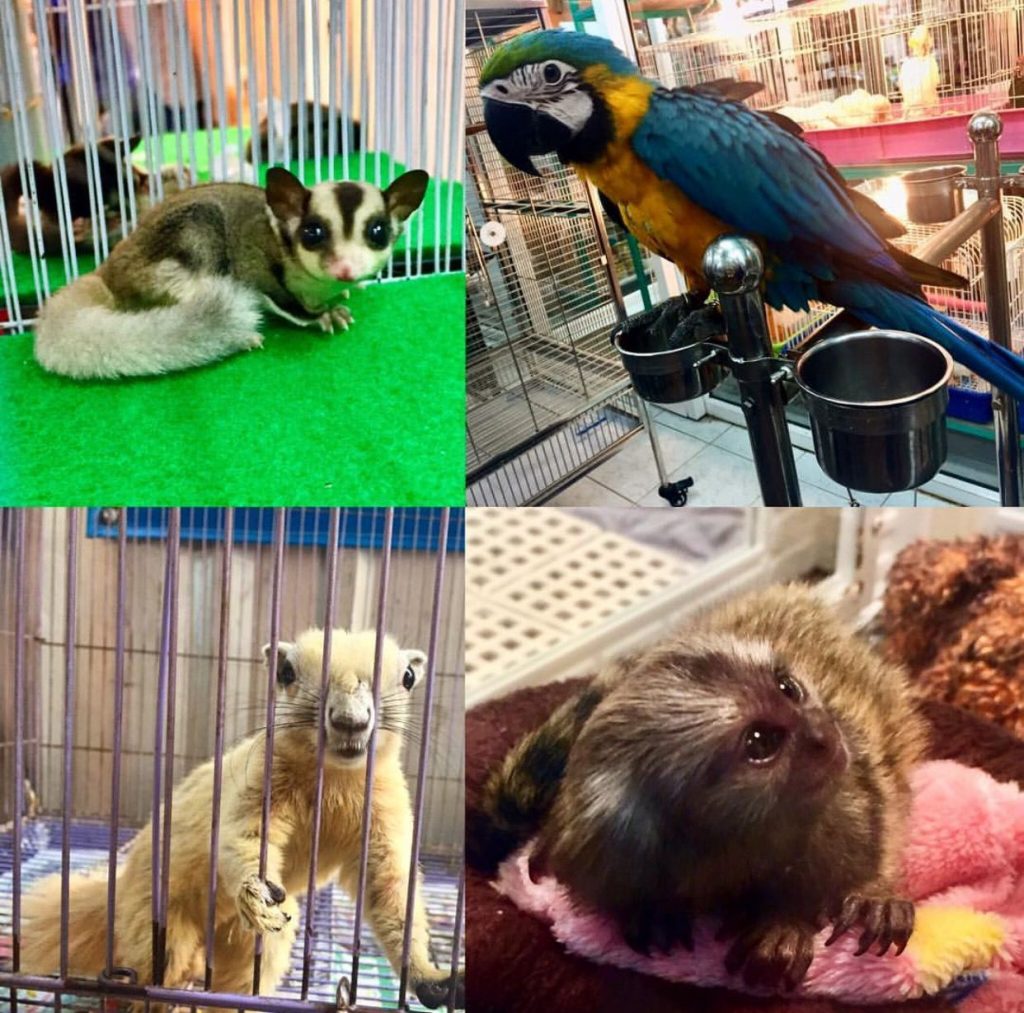 Why should you care?

Illegal animal trade has effects beyond animal extinction, it is not just environmental issue. Hillary Clinton described the issue in 2012 as: ‘a national security issue, a public health issue, and an economic security issue’ (Lawson, Vines, 2014). Mainly because the poachers are organized crime groups and rebels who are heavily armed, reaching out to international boarders (Goldenberg, 2012). There is a very interesting and thorough research conducted by the Royal Institute of International Affairs explaining the global impacts of the illegal wildlife trade. Click here to read the full research. Below is a infographic that explains the consequences and effects of wildlife smuggling from different sides.

Moreover, animal smuggling is not just one branch or independently working crime. Besides being linked to organized crime, it involves also drugs, arms and people trafficking. Drugs have been sent in the same shipment with the animals, sometimes they are even sewn into animals. Further, wildlife is being traded for other illegal matters like drugs and weapons. (IFAW, n.d.)
Therefore, going back to the consequences, it is very much a global issue that people should be more aware about. 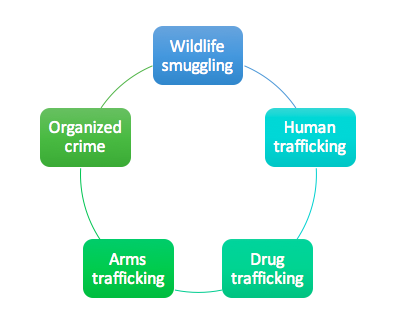 Also, next time when you think of buying a crocodile skin bag or fur coats, realize that you are not only contributing to animal extinction, you will also contribute to organized crime, human trafficking and all the other connections linked to that. If there is demand that needs to be supplied then the illegal wildlife trade will never end.

Unfortunately, illegal wildlife trade is a huge global issue and needs government help and laws to stop it. Yet, there are several organizations that are dealing with wildlife smuggling and are working towards minimizing and ending it. For instance, World Wildlife Fund is organizing a pledge which you can sign to stop wildlife crime. You can find it and sign it here, it will not take a lot of time, I promise. If you follow them on Facebook you can be up to date with current problems and with other projects that they are working on. Further, they are urging governments to take action against illegal wildlife trade. You could also donate money to organizations. For example, Wildlife Conservation Society, has many acts going on where you could take part of and donate from 25 dollars up to whatever amount. You can yourself choose which species you want to help. Do not think that helping out is pointless, the 2013 infographic from World Wildlife Fund shows the results from actions that had been taken. 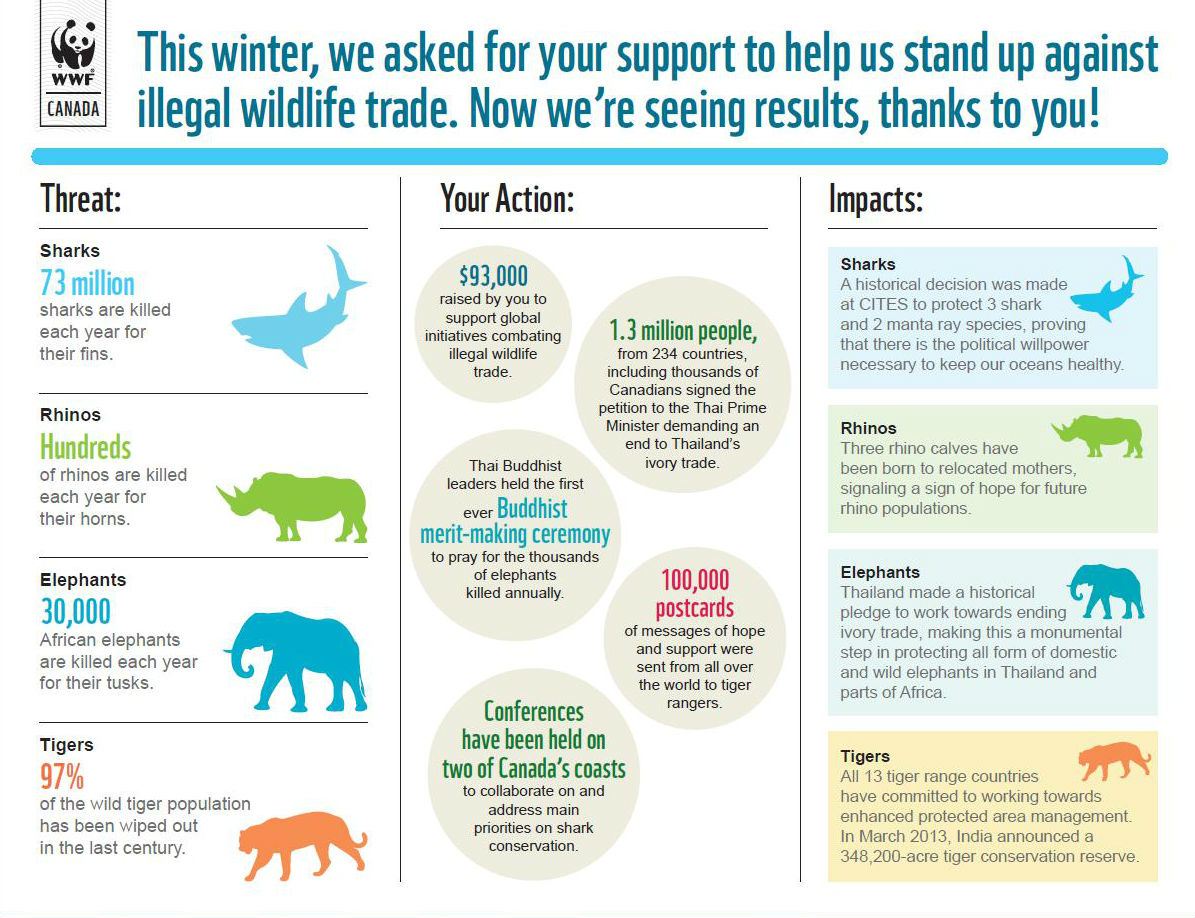 Moreover, sign up to news letters to be up to date (you can find them on both of these pages mentioned above) and stop buying products that have been made from animal skins (wallets, carpets, ivory, bags, clothes etc.). Most importantly educate yourself and your friends/family. Mr. Sutter from CNN and his followers have put together list of must-reads on illegal wildlife trade, there are definitely some interesting reads. Find the list here. Also, you can find some interesting articles listed below in the sources section. Lastly, remind yourself that with supporting illegal animal trade you also put in danger yourself as means of health and your safety (national security) and that you support other crime sectors as well. Your actions count – help the ones who cannot help themselves!

3) European Parliament. (2016). Article: Wildlife trafficking: “It is easier to smuggle rhino horn than drugs” from http://www.europarl.europa.eu/news/en/headlines/society/20161111STO50931/wildlife-trafficking-it-is-easier-to-smuggle-rhino-horn-than-drugs

5) Felbab-Brown, V. (2013). Article: The Illegal Trade in Wildlife in Southeast Asia and Its Links to East Asian Markets from https://www.brookings.edu/articles/the-illegal-trade-in-wildlife-in-southeast-asia-and-its-links-to-east-asian-markets/

12) Lawson, K., Vines, A. (2014). Research: Global Impacts of the Illegal Wildlife Trade. The Costs of Crime, Insecurity and Institutional Erosion from https://www.chathamhouse.org/sites/files/chathamhouse/public/Research/Africa/0214Wildlife.pdf

13) Reyland, M. (2011). Article: Wildlife Smuggling in Thailand: A Matter of Convenience from http://www.thailawforum.com/illegal-animal-trade-thailand.html

14) Save The Rhino. Article: Poaching for Rhino horn from https://www.savetherhino.org/rhino_info/threats_to_rhino/poaching_for_rhino_horn

15) The Economist. (2014). Article: The illegal trade in wild-animal products from https://www.economist.com/news/international/21607891-parts-some-endangered-species-are-worth-more-gold-or-cocaine-bitter-pills