LOVERBOYS IN THE NETHERLANDS
A very good example for human trafficking in the Netherlands is, that vulnerable Dutch girls getting involved with young traffickers, also known as loverboys. They act nice, sweet, and perfect to the girl in the first place, overwhelms them with gifts and beautiful promises, and manipulate them to take more distance between her and her family and friends. This makes them even more vulnerable than in the first place. This is the moment where the loverboys force the girls in unwanted sex with others for money. 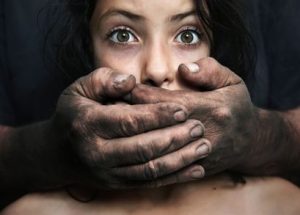 Between 2011 and 2015 the victims of sexual abuse increased with 64%. This is a shocking figure. Still, not enough victims are known. This makes it more difficult to help and protect the victims. Moreover, the age of the victims dropped in the last few years. More victims are under the age of 14. Because of the new social media era, it is easier for loverboys to approach these young girls. The prototype of the loverboy is also changing, first there were mostly loverboys who, as mentioned above, have a lot of money, promises the girl endless love, and spoil them with gifts. Nowadays, you have more different types of loverboys.

FACTS AND FIGURES
The Walk Free Foundation is a Australian organization that commits to end the modern slavery and human trafficking, estimates that there are 45,8 million slaves worldwide. These figures are published through Global Slavery Index and are from June 2016. Also, Global Slavery Index estimated that there are more than 1,2 million slaves working in Europe, of which 17.500 in the Netherlands. These are only estimations, because not all victims are recognized or registered. Often victims feel anxious and unsafe, and avoid the police, because they are afraid of expulsion or revenge.

Which shocked me the most are the following figures: 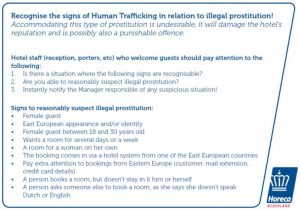 WHAT CAN YOU DO AGAINST HUMAN TRAFFICKING
Anyone can join in the fight against human trafficking. Here are a few points that you can consider:

I think it is important to me more aware of human trafficking. Slavery did not stop! It is getting worse and worse every day! Help and help trying to prevent human trafficking with the list mentioned above.

If you want to see how much slaves are working for you, you can do a simple test at Slavery Footprint. They will ask a few questions about your country, clothes, food, and your electronics. I was interested, so I did the test and found out that there are 35 slaves working for me, which really shocked me!! I think it is important to do this test to be more aware of human trafficking and the severity of it. 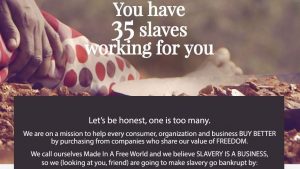