What is supposed to be a fun and cosy day spent with your family to continue celebrating Christmas, turned into a huge disaster in 2004. On the 26th of December, boxing day, one of the biggest natural disasters in the history happened. An earthquake near the coast of Indonesia triggered multiple tsunami’s, a few of those tsunami waves hitting the coast line of Thailand. This disaster hit 14 different countries, namely India, Indonesia, Malaysia, Maldives, Myanmar, Somalia, Sri Lanka, Thailand, Bangladesh, Somalia, Kenya, Tanzania, South Africa, Madagascar and the Seychelles and affected 5 million people in these areas (Akkoc, 2014). It let 1,7 million people homeless and 230.000 people were killed (Akkoc, 2014).

Tsunamis are enormous waves caused by sudden movement of the ocean due to earthquakes, landslides on the sea floor, land collapsing into the ocean, major volcanic eruptions or large meteorite impacts. (CWarn, n.d.). Most tsunamis are caused by large earthquakes at the seafloor, when large plates of rock are forced to move past each other causing the overlying water to move. The resulting wave moves outwards and away from this event. Underwater landslides can cause tsunamis, and so can land which collapses into the ocean. Landslides happen when slopes become too steep to withstand gravity. Less common are tsunami initiated by volcanic eruptions. These occur in several ways:
• if an underwater volcano erupts, the hot lava may heat the surrounding water quickly and explosively.
• massive flows of volcanic debris such as ash can travel down the side of a volcano and into the ocean, pushing water outwards.
• the top of an underwater volcano may collapse downwards, so that the overlying water also drops.

Large meteorite impacts that occur at sea can trigger tsunami too. 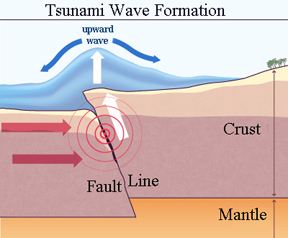 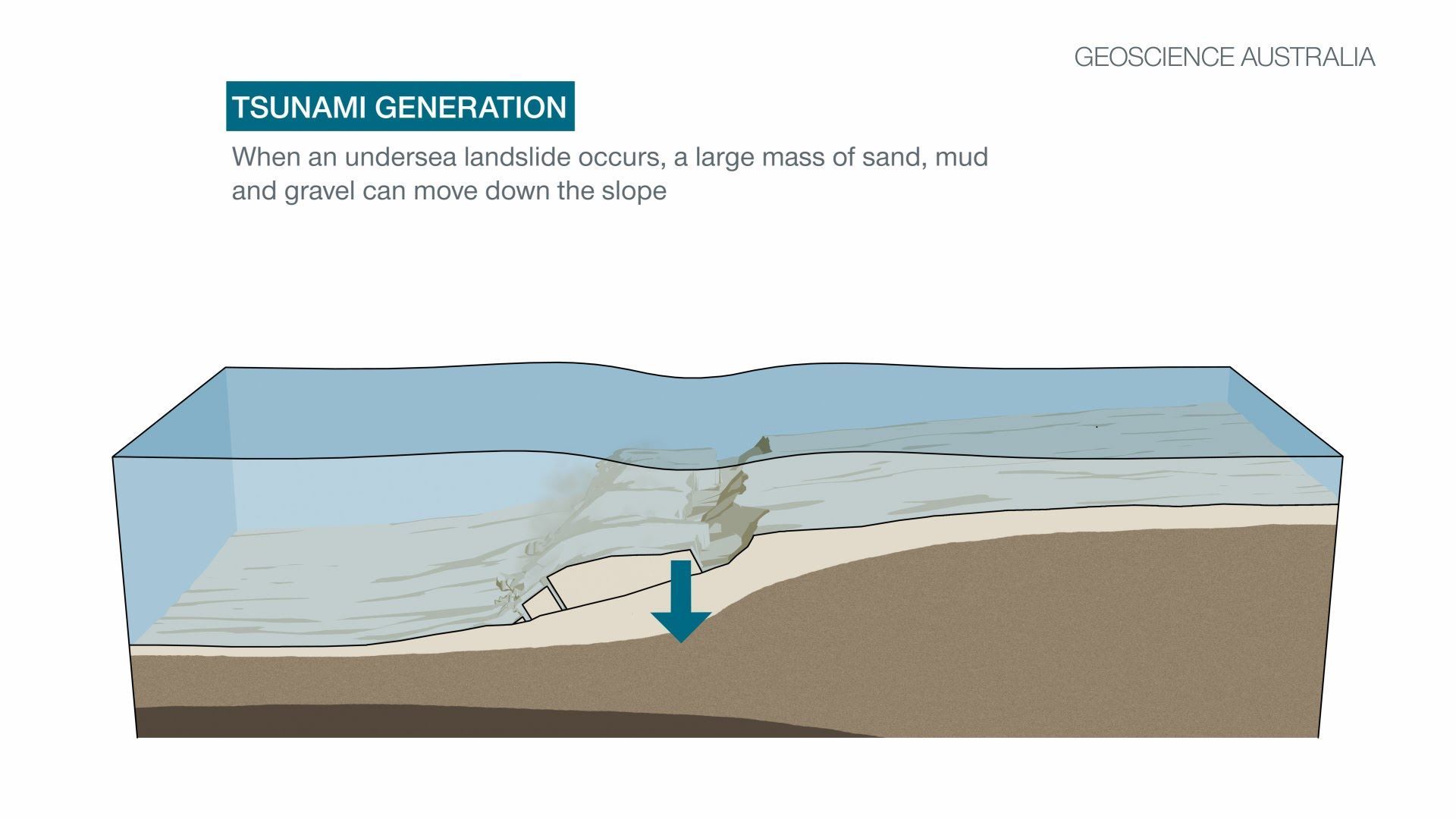 So now that we know the general theory of how tsunamis can occur. We can look at what exactly happened on Boxing Day 2004.

The tsunami that occurred in the Indian Ocean on the 26th of December 2004 was a result of the Indo-Australian plate moving below the Eurasian Plate. It was caused by an earthquake measuring more than magnitude 9 (BCC, n.d.). An earthquake with a magnitude of 9 is in class ‘Great’ which means that it is the most dangerous earthquake there is. (UPSeis, n.d.). The earthquake in the Indian Ocean caused the seafloor to uplift, displacing the seawater above. Which eventually caused the huge tsunami waves.

Now let’s get more into detail, the floor of the Indian Ocean, the Indian plate, is moving north at around 2.5 inch per year (Time, 2014). As is moves, it is forced under the Burma plate to its east. This causes for tensions between the two plates eighteen miles below the surface of the ocean, and eventually to an earthquake with a 9 on the scale of Richter. The dislocation of the boundary between the Indian and Burma plates took place over a length of 745 miles and within three days had set off 68 aftershocks. (Time, 2014) The movement of the plates send shock waves through the water which can lead to huge waves that move with a speed of up to 500 miles an hour. In deep, open water, you would never even notice these devastating tsunamis, which are often no more than a few inches high. But when the water’s depth decreases, the wavelength shortens and the height of the wave increases. Then it crashes to the shore with the power to wreck buildings and kill thousands of people.

Tom and Arlette Stuip being hero’s

Tom and Arlette Stuip were on a holiday in Khao Lak, Thailand on boxing day 2004. (BBC, 2014) Tom and Arlette were having breakfast at the hotel on a terrace, overlooking the pool, the beach and the Andaman Sea when Tom noticed the waiters were all pointing at the sea which was moving backwards very fast. It was a fascinating sight. People got their cameras out and walked towards the dry seabed. The beach was full of sunbathing tourists.

Tom had an uncomfortable feeling though. He lived on the beach in California for two years and had never seen a sea behave like this. Then it clicked: the trembling he heard earlier was an earthquake. A huge wave was coming towards them.
Tom grabbed Arlette’s hand and screamed, “Run!”. At that same moment, he saw a high wall of water come crashing over the reef towards them at a speed of 40-50mph. We ran uphill fast. The water was right behind us. The noise was deafening.
Tom looked behind and saw the beach and pool area were a boiling mass of water. Palm trees, beach chairs and parts of bungalows were spinning around in the air and people were madly trying to hold on to something. They kept going for higher ground, up the steep hill into the jungle beyond it. They waited for two hours, knowing only few people would have survived the battlefield below.

When the sea looked calm they went down again to the hotel, and found many badly wounded people. They helped to get them onto the back of trucks taking people to hospital. (Story told to BBC News) 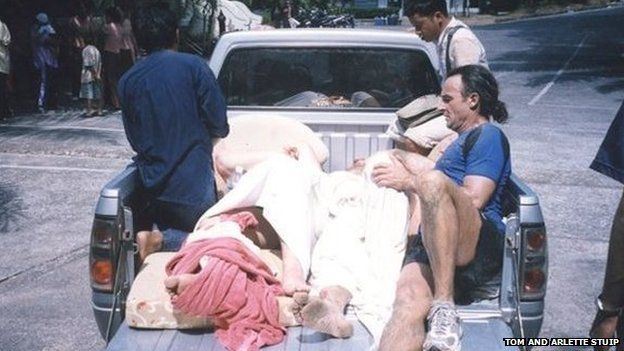 A tragic story of a Thai local

Wisut, Thai 12-year old local from Nam Khem Village was out driving his bicycle in the morning near the beach when he saw a huge white wave grow as it approached the shore. He knew it was going to be a big, big wave and knew he needed to let this family know that something unheard was about to happen so that they could escape with him. His father, mother, and grandfather were at home along with his grandmother and two uncles and his two siblings, one was three months old.

By the time he reached the laneway to his house, all he could do was escape on his bike. There was nothing else he could have done. (Wisut, 2015)

I think this must have been the hardest thing Wisut ever had to do in his life. I also think that if he would have been a little older than twelve he might have thought differently about saving the lives of his family members. A twelve-year-old is more willing to run away for fear than maybe a twenty-year-old is. A twenty-year-old might have gone back to his family knowing there is a chance none of them will survive, but taking the risk for all of them. However, after all the tragedy Wisut had to go through I am happy to tell he gets to live his life again.

How is Thailand doing now?

13 years after the most horrific natural disaster in the recent history, Thailand is recovering well. I, myself, the writer of this blog, cannot believe that something so terrible has happened in this beautiful country and so many people have lost their lives. I have visited places like Krabi and Koh Phi Phi and literally nothing of what then happened can be seen back in daily life. People do not like to talk about it over here because they prefer to pretend nothing ever happened and don’t like talking about sad things. A good example of this is that Thai people do not really talk about the King that recently passed away either. They show their sadness and they might speak about it at home, but in public they rather keep quiet. The name Land of Smiles is not for nothing, Thai people love to ‘smile everything away’. 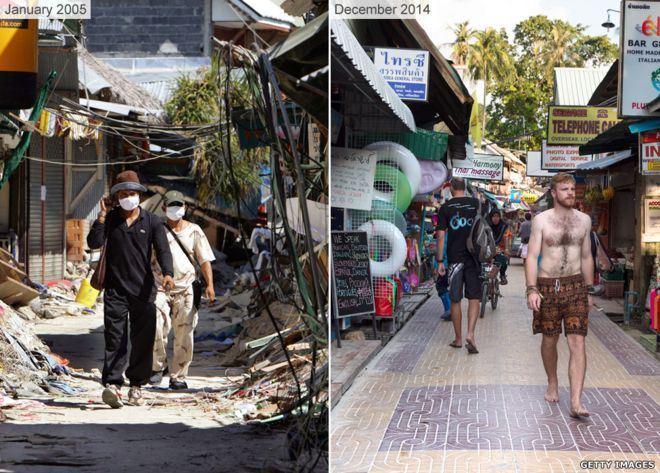 So, what can we, as the world, still (after 13 years) do to prevent that anything as terrible as this will happen again?! Nowadays, warning systems have improved drastically. A tsunami warning system (TWS) is used to detect tsunamis in advance and issue warnings to prevent loss of life and damage.

The Pacific Tsunami Warning System, for example, is made up of a network of seismic-monitoring stations and sea-level gauges. (Australian Government Attorney-Gerenal’s Department) These detect earthquakes and abnormal changes in sea level and help scientists decide whether a tsunami has been triggered by an earthquake. If so, warnings go out to many countries and regions in the Pacific. A warning center is in both Hawaii and Alaska.

Another example of a Tsunami Warning System in the World is the one of Thailand. After the huge disaster in 2004 the countries hit were focused on reconstruction. Funding for any warning system would have to come from international donors, who had pledged billions in relief aid. Germany led with a €60 million investment, with Japan also playing a key role. (Coca, 2015) After years of work by global scientist, development agencies, and governments, in 2013 Indian Ocean Warning System (IOTWS) became fully operational. It can quickly detect earthquakes, distinguish whether they will produce a tsunami, monitor how ocean waves are spreading, and predict where they might go. This detection and monitoring network then provides information to the region’s three tsunami warning centers, run by Australia, Indonesia, and India.

So, what can we personally do? Of course, always be updated with the news. News channels will always inform people if any danger is coming up. But, what might help even more; look at these websites below of the Tsunami Warning Systems if you are really concerned.