Under the Wave off Kanagawa is one of the most recognisable artworks in the world, the first print of, Japanese artist, Katsushika Hokusai’s Thirty-six Views of Mount Fuji. It depicts an enormous rogue wave threatening boats off the coast of Kanagawa; Mount Fuji, almost an afterthought in the distance. The woodblock print, published in the early 1800’s, is often and incorrectly believed to show an incoming tsunami, but, has come to be a symbol for natural disasters the world over. 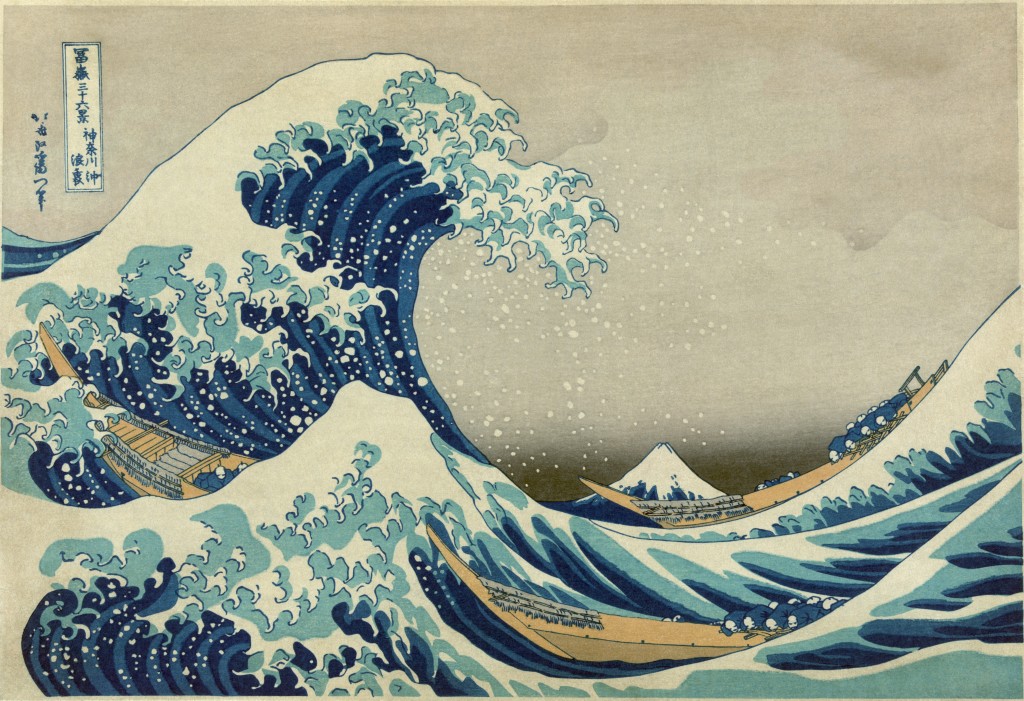 Hokusai’s print is a reminder of the great power of nature as well as the bravery of human beings. The world is a dangerous place made even more so through our interactions with it; but that’s no reason to lay idle in the face of seemingly insurmountable circumstances. For this reason we are compelled to develop strategies and procedures for dealing with the mighty forces that would see us perish in their wake.

South East Asia is a highly disaster prone region of the world; the greater Asia-Pacific region being the most disaster prone region in the world. More than 41% of the worlds natural disasters, in the period 2004-2013, occurred in the Asia-Pacific region. Indonesia and the Philippines, alone, lost more than 350, 000 people during this period. Sitting between several tectonic plates and two great oceans (Pacific and Indian) puts the region in a precarious position to begin with. This coupled with the risks associated with rapid urbanisation, climate change and environmental degradation makes the ASEAN region extremely vulnerable to a number of hazards. These hazards include: typhoons; earthquakes; tsunamis; floods; volcanic eruptions; landslides; drought; forest-fires and epidemics. The following map shows disaster events, in the ASEAN region, which have affected over 100 people between January 2012 and November 2016. 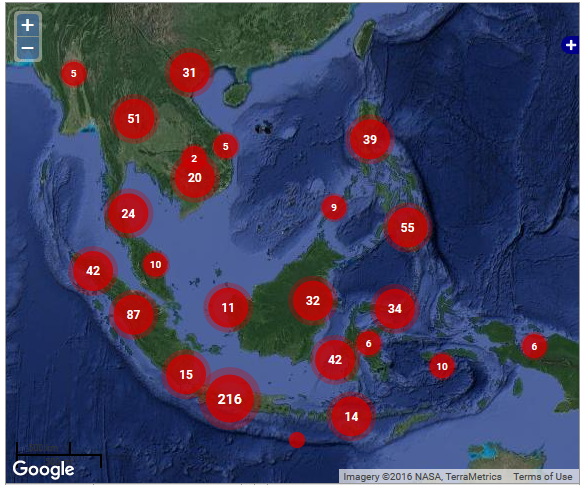 Breaking the Wave of Disasters at ASEAN’s Door

Apart from the loss of life and property, these disasters pose a severe threat to the development goals of the ASEAN region and erode existing development gains. To ensure the protection of the the regions people, economy and future it is necessary for ASEAN, as well as the individual nations, to develop policies, plans and procedures through the four stages of the disaster management cycle – Preparation, Response, Recovery and Mitigation. 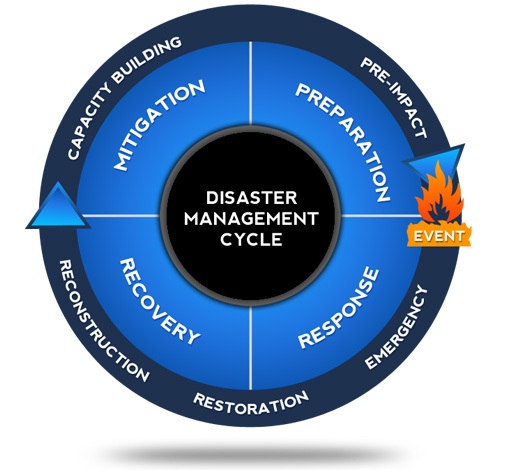 The Four Stages of the Disaster Management Cycle

When it comes to response, recovery and mitigation the national and regional agencies involved in disaster management are the main bodies which must undertake these operations. Preparation is for everybody. Hazards are a fact of life, it is our vulnerability to these hazards which determine whether they are to become disasters. So before we look at some of the ways ASEAN responds to, recovers from and mitigates the effects of disasters lets look at ways the individual can prepare for these types of situations.

Failing to Plan is Planning to Fail

The Pacific Disaster Centre (PDC) is a multi-functional organisation which offers scientific analysis of hazard related information to provide disaster risk reduction solutions to governments, organisations and individuals. They have recently launched Disaster Alert, an interactive hazard map which is accessible to anybody with an internet connection. Currently the Disaster Alert map shows, in the ASEAN region, two earthquakes in Indonesia with low risk status and a Thailand/Myanmar flood warning.

Aside from this amazing tool, the website offers resources for individuals and households to properly prepare themselves in the event a disaster should strike. One of those resources is a Disaster Supply Kit (DSK). The DSK is an inventory of items that should be prepared when there is no sign of trouble ahead. When a disaster does occur there is no time to dash out the supermarket and pick up a few things. You need to prepare now! You can download a DSK checklist here. The website also explains the need for a Family Disaster Plan. This is an actionable strategy to put in place in the event of a disaster. Making certain decisions before an event will save you vital minutes and seconds during a chaotic situation. Knowing what you are going to do before you need to do it could end up saving a life.

You now what they say about the best laid schemes of mice and men? I thought so. So after all your planning and preparation has gone out of the window, who you gonna call? Unless your disaster is one of paranormal proportions the it wont be the Ghostbusters. You will be calling the police, fire brigade, paramedics and just about anyone you can get a hold of. The problem is, a disaster, by definition, disrupts a community to the extent that their capacity to deal with the event is overwhelmed and assistance must be sought from neighbouring communities, districts, provinces, countries and finally the international community in severe cases. To adequately deal with disaster situations in the ASEAN region, the ASEAN Co-ordinating Centre for Humanitarian Assistance on disaster management (AHA Centre) was established in 2008.

The first responders to any emergency event will be those that are nearest to the problem, but when disasters cripple the infrastructure of an area it is necessary to seek assistance from others. The ASEAN Emergency Response and Assessment Team or ASEAN-ERAT is rapid response team of highly trained individuals whose purpose is to support the national disaster management offices (NDMOs) in the affected nation. Managed by the AHA Centre, the ASEAN-ERAT will conduct a rapid assessment of the area, co-ordinate the mobilisation and deployment of regional disaster management capacity and facilitate any incoming relief assistance from other ASEAN states. At this time there are 91 members of ASEAN-ERAT stationed across all ten ASEAN countries. ASEAN-ERAT is made up of members from the NDMOs, non-governmental organisations (NGOs), military personnel and AHA Centre staff. A diagram of their method of operation is depicted below:

Coming back from the devastation caused natural and man-made disasters can only be accomplished through the sheer will of the human spirit. The recovery stage is often categorised by a waning of the energy that drove the response stage. People begin to contemplate the magnitude of the situation and the emotions that were put aside earlier bubble to the surface. So telling people who are dealing with the loss of lives and livelihoods that are standing in the face of opportunity seems insensitive. But its true. The term “Build Back Better” is one that is often used in the disaster management community. Essentially, it means that anything that has been lost can be restored and improved upon. It is the job of local government to work with affected communities to ensure recovery is swift and sustainable.

In April of this year, the ASEAN Committee on Disaster Management (ACDM) approved the ASEAN Disaster Recovery Reference Guide. This guide is to be used throughout ASEAN to build resilience and develop the knowledge of officials entrusted with the duties of restoring communities to their previous states and developing them further. At the sixth meeting of the ACDM Working Group on Recovery, held in September 2016, government officials from ASEAN states were put through a two-day simulation exercise to determine the most efficient ways to use the guide in order to create timeous recovery strategies. Chief among the elements of recovery discussed were, the need for accurate and rapid post-disaster needs assessments and increasing community participation to speed the process of recovery.

Mitigation comes in many forms, from innovative construction techniques to early warning systems to spatial planning procedures. Mitigation strategies are never as exciting as response strategies and often don’t get the same amount of funding as response and recovery initiatives. Prevention is always better than cure. But it isn’t cool. The best mitigation strategies come in the form of pieces of paper that have been signed by a few people wearing suits. These people have often never been near a disaster situation but if they have signed these bits of compressed pulp then they can either empathise with those who have or they have the foresight to see the the huge economic gains that can be made through prevention rather than cure.

ASEAN states have a lot to worry about when it comes to climate change. A large proportion of the ASEAN population and economic activity is situated along coastlines making them extremely vulnerable to sea-level rise and the associated hazards. The heavily agriculturally reliant ASEAN states also have much to fear from sudden increases and prolonged decreases in rainfall. To combat the issues of climate change, ASEAN established the ASEAN Working Group on Climate Change (AWGCC) in 2009. The AWGCC’s main purpose is to oversee the the implementation of climate related actions outlined in the ASEAN Socio-Cultural Blueprints (ASCB). The development of the ASEAN Action Plan on Joint Response to Climate Change in 2012 has detailed the actions called for in the ASCB. On such action has been the establishment of the ASEAN Peatland Forests Project which aims rehabilitate areas and promote sustainable management of the forests.

Let the Waves Wash Over You

Sometimes trying to break the waves is only going to end up breaking you. The world is a violent and mysterious place which changes as fast or faster than we can learn its secrets. Just when you think you know what the earth is about to do, it does the exact opposite. Our ability to adapt to our ever changing planet is our best chance at surviving its tantrums. And our willingness to embrace each other and share our collective knowledge will determine the level of adaptability.

Have you ever been involved in a emergency situation?