Terrorism has become a part of our life just as social media, so it has become obvious that terrorist groups have collected most of their fighters through their social media channels. Probably everyone will remember some videos published by ISIL starting with some beheading videos, riding a tank over a Syrian soldier, the burning of a Jordanian pilot in a cage or videos from Boko Harman or Al-Qaida. Horrible videos and images were quickly available all over the world and within seconds negative comments were published, however some people saw them positively and as game changers.

To keep in mind that there are almost 8 billion people in the world and over 50% has connection through social media.

The Arabic hashtag, “#باريس_تشتعل,” is directly translated on Twitter to “Paris is Burning.

In the days followed by the Paris attacks Twitter saw a huge peak of tweets from all over the world with people who cried for Paris versus ISIL supporter who expressed their joy about the attacks.

Even the biggest social media of all Facebook took several actions on the Paris attacks, people in Paris could mark themselves as ‘’safe’’ and people from all over the world could change their profile pictures into a French flag to show their grief.

Terrorists groups use social media different ways, they share information about their radical ideas and extremist thoughts and link it back to their online radical websites mostly under a bot network. They also provide practical information such as bomb recipes, weapon maintenance and how to be most effective in killing a group of people, these information is often used by the ‘’lone wolfs’’ which form the biggest threat to the national agencies due to the fact they are hard to find. Social media is also used to spread their propaganda around the world and their extremist ideological message. They often send out messages to people in western cities to take up their arms and bomb/kill the so called infidels. 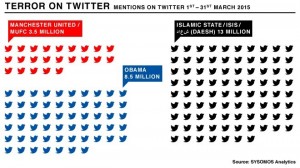 In this picture above it can be seen that from the 1st of march till 31st of march tweets about the Islamic State were almost four times bigger than tweets about Manchester United which has the biggest reach on their fans true Twitter compared with other football clubs. Islamic State had even 4.5 million more tweets in that amount of time than the US president Barack Obama.

ISIL has published thousands of  messages on Twitter, mostly focused to recruit people in the west. These well developed videos and photo shopped images seemed to allow it to look reliable. From all terrorist groups ISIL has the most online propaganda and a huge devastating effect.

‘’The average age of foreign fighters who traveled to join ISIL is 24, meaning tools like Facebook, Twitter, and Instagram are what they’ve grown up with. In the context of global jihad, this is a dangerous combination.’’

Companies such as Google, Facebook and Twitter are helping actively with governments to fight against the ISIL’s online movements and to clear their platforms of extremist ideology thoughts. However they are doing it covertly to avoid ISIL of alerting them the counter measures how they want to stop online terrorism.  In the meantime hundreds of thousands accounts have been deleted from these platforms.

Even various amounts of groups of activist hackers have started a war on ISIL online capabilities, probably the most famous one is Anonymous started to join the fight and they stated:  “They picked a fight with Anonymous when they attacked Paris, and now they should expect us,” he said, adding that the collective “will not sit by and watch these terror attacks unfold around the world.”

Given the mystery amorphous nature of Anonymous, it has a unknown amount of high qualified hackers from all over the world with no official leader or spokesperson. When it comes to them they are more than able to shut down the ISIL website and account to show the vulnerability online and to show the world ISIL is as vulnerable as anybody else. However not everybody is happy with the interference of the hackers group due to the result they could interfere with national agencies who are already keeping track on various account of sites. 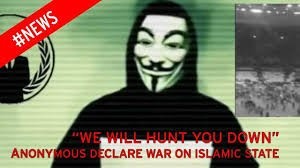 However what the direct result of the group will be remains unclear, they have been very effective in their first days to shut down over 20.000 ISIL related Twitter accounts and to hack an huge amount of ISIL websites leaving the messages to the people that they need to stay calm and live in peace.

They also attacked the ideology of ISIL by hacking numerous accounts and changing the ISIL flag into the rainbow flag which stands for gay acceptance which goes straight into the line of thinking of the ISIL ideology.

If we believe the intelligence of the countries fighting the ISIL caliphate their days are most likely come to an end soon but the fight against ISIL will be there for years to come due to the fact the extremist ideology is not easy to beat on the internet where almost 8 billion people has a voice and a platform to share their ideas.

However there is still lots off support from countries all over the world who like the idea of what ISIL is doing. The top 3 countries aren’t a surprise for me but US as number four was shocking . As well as the United Kingdom was very high on this list which is kind of the center of Europe.

Over the years it will be more clear of how this online war will develop itself as well as the situation in the middle east, which is until now the breading ground of the extremist ideology. It will stay that way for at least many years due to the difference in the Muslim ideology.

Additionally we should take into consideration that there are huge amount of refugees in Europe which are underpressed and could fall into the hand of the ideology while they were fleeing their own country from.

In my opinion we will never be able to filter all of the extremist ideology from the internet due to the fact that it is too big and many off it is a grey area for governments and companies. For example Twitter will be unable to search all the accounts what will promote these ideologies due to the fact of privacy on these platforms. A scary thought but only time will tell.