The War on Terror: Biggest Mistake of the 21th Century?

History
Probably everyone who was 7 years or older could remember the terrorist attacks on September 11, 2011 when al Qaida hijacked multiple airplanes and crashed them into the world trade center and the pentagon. This was the cause of starting an global war on terror announced by the current US president George W Bush at that moment, the beginning of the invasion in Afghanistan and Iraq. George W Bush stated that: ‘’Either you are with us, or you are with the terrorists’’. In which neutrality was unacceptable, the NATO clarified article by which this attack on America was an attack on all NATO members.
In the past there were already several wars on terror such as in 1984 when US president Reagan used the term war against terrorism as a direct result of the Beirut attack, or when Russia intervened in the war in Afghanistan to wipe out terrorism. Which were all unsuccessful.
The war on terror consist of; the invasion of Afghanistan, the assumption of the patriot act, the publication of the most wanted terrorist, the Bush-doctrine, the establishment of Homeland Security, to set the ‘’Terrorist Information Awareness program and finally the Iraqi war.

The President announced it on September 20, 2001, in this speech to Congress. “Our war on terror begins with Al Qaeda,” he said,”but it does not end there. It will not end until every terrorist group of global reach has been found, stopped, and defeated.” (Source: “Bush Addresses Nation,” Washington Post,) 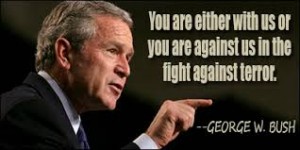 Foreign Affairs
In 2009, the Foreign Secretary of the United Kingdom; David Miliband has criticized Bush his war on terror he stated that: [‘’George W Bush’s war on terror may have played into the hands of violent extremists’’]. He concluded that the expression is misleading and caused that many terror groups with multiply purposes have been able to unite against the west.
Graph 1: Global Terrorism Index report by Institute for Economics & Peace 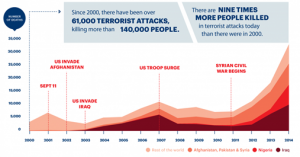 In the graph above can be seen the amount of terrorist attacks from the year 2000 till 2014, unfortunately the year of 2015 and 2016 are not in the graph. However it is expected that the growth of attacks has continued, especially in casualties in the rest of the world and in Syria. When looking closely to this graph the US troop surge followed by an quick drop in attacks and was booming again in 2011 when the Syrian civil war started.
IS or Assad?
Western governments have mostly have a clear statement on which groups are considered terrorism and which are not. However, states as Turkey have different opinions on such matters they have declared the YPG and PKK as terrorist groups which are on some matters supported by the US.
To quote John Hammer of the activist report: One man’s terrorist is indeed another man’s freedom fighter. To investigate the idea of who are the real terrorist and who are not? ISIL has a support of 21% of the Syrian people and a 12% support in the Syrian government, many people are feeling themselves freed when the group took over town from the Syrian government and installed the Sharia law. These people wanted change from the current government for years and ISIL provided that change so by some they were welcomed with open arms. But now they experienced the horror and terror and they would like to return to the way it was even under the rule of Assad.

Result in 2016
Nowadays 2016, 15 years after the start on the war on terror could be concluded in my opinion that this war only created more terror. At his moment we have multiple terror threats, and they are bigger than ever before especially due to the rise of the Islamic State in Syria and Iraq. Iraq which has been a deadly playground during the war on terror is not a single step further in a future where there will be peace.
However we could not state that the war on terror had zero success, probably the killing of Osama Bin Laden was an huge success in these efforts. But the war did caused further hatred view of Muslims against the western society and the other way around; the rise of extremely right wing and sometime racism politicians. Especially in Europe the right wing parties are becoming more popular than ever before some examples are: France, Austria, Germany & the Netherlands.
It can be stated that you can reflect on the subject on various different points of views. you could state that after the fall of Saddam Hussein the people are freed by the Americans and moved to democratic governments, on the other hand you could state that the people now live in fear due to the rapidly increased suicide bombings over the country, the number of suicide bombings have seen such a huge increase depending on the source you could say that there is an increase of 500% – 1000% in a period from 2000 till 2015. Unfortunately these numbers are not likely to drop any time soon. 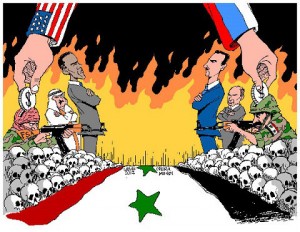 Since the 9/11 attacks, governments around the globe have increased their capabilities to tract down and arrest or kill these functional terrorist cells. However there is often a lack of the legal foundation on which these actions happen. Also the governments are still failing to stop the ideologies of these extremist.

Conclusion
To conclude, no war against terror has ever achieved its goal and most of the times it created far more terror than before. The war on terror has seen lots of different viewpoints from all over the world good and bad.

The estimated cost of the war is around the 1.3 trillion US dollars, this money could have been used to educate people about the right way to follow their religion. We can’t never that this would resulted in less terrorism around the world, but we can say that the 1.3 trillion US dollars was a very bad investment.
Nowadays the US coalition chose for a different approach in Syria and Iraq and it will be too early to see if that will be successful. However how could bombing the place bring peace in the region? The middle east would be a warzone in the years to come because in my opinion when IS will be defeated within a year they would start to fight each other, there are too many religions and groups in the region to withhold peace.

In my opinion the middle east could be the starting ground of World War 3, a very scary idea but if you look how many parties are in the field it is not an impossible one, the Turkish hate the Kurds, The Kurds want their own Kurdistan, Everybody hate Assad, Russia and Iran back Assad, US is bombing on the many sides, I guess you have a clear overview about how complex the situation is. The only thing what we can do is hope/pray for the best. 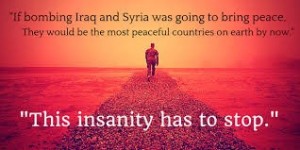