The 21st century has seen an unprecedented rise in terrorism, a term that encapsulates a variety of connotations such as radicalism, extremism, bombings and absolute sabotage .The nature, approach and geographic characteristics of such acts of terror has also evolved over the last sixteen years. Based on the 2015 Global Terrorism-Index-conducted by the Institute of Economics and Peace  “Since the beginning of the 21st century, there has been over a nine-fold increase in the number of deaths from terrorism, rising from 3,329 in 2000 to 32,685 in 2014”.

At a global scale the most severe impacts of terrorism occur in just five countries , these being Syria , Nigeria ,Iraq, Afghanistan and Pakistan . 74 % of the lives lost to terrorism in 2014 occurred within these five nations. The west has seen a rise in the insurgency of ISIS attacks since 2014 however in the last fifteen years the west which includes the United states , Canada ,Australia and European countries have only accounted for 0.5% of the total amount global deaths caused from terrorism . And this brings us onto the discrepancy between the Medias portrayal of terrorist attacks and how the world perceives and reacts to terrorism in the west in comparison to how it responds to terrorism in the east. Let’s take a look at two acts of terrorism that occurred within hours of each other, both of which were perpetrated by ISIS. The Paris attacks that took place in November 2015 sent a ripple of mourning and almost denial across the world. How could this happen to France? Whilst the world mourned over the atrocity of the Paris attack Lebanon had been sidelined from the spotlight and had to mourn the loss of over forty of its citizens to suicide bombings that hit southern Beirut the evening before the Paris attacks occurred. Why did Lebanon not receive the same global grieving treatment as France did? There are an array of variables as to why Lebanon may have been marginalized. Firstly the death toll in the Paris attacks exceeded 130 deaths whereas in Beirut 43 lives were lost. Is it fair to assume that because more lives were lost in Paris that Lebanon’s loss was insignificant ?

Is the media is bias?

To say social media institutions and news agencies ignored the Beirut attacks would be a lie. However the manner in which the attacks were portrayed in Beirut were so different from the way the Paris attacks were described. The Paris attack headlines and stories captured the human element of the suffering nation. The journalists used sensational diction and described the event in a way that allowed the reader to empathize with the victims on a personal basis. Let’s take a look at the headlines of some of the reporting media sites on the Paris attacks. CNN headlines titled the event as a “massacre” . In a similar fashion Reuters headline was “Disbelief, panic as militants cause carnage in Paris a second time”.   A New York times article wrote a heart touching piece on the attack and the prelude to the attacks on how the people of France were going about their festive evening without any notion of the atrocities that were soon to follow. 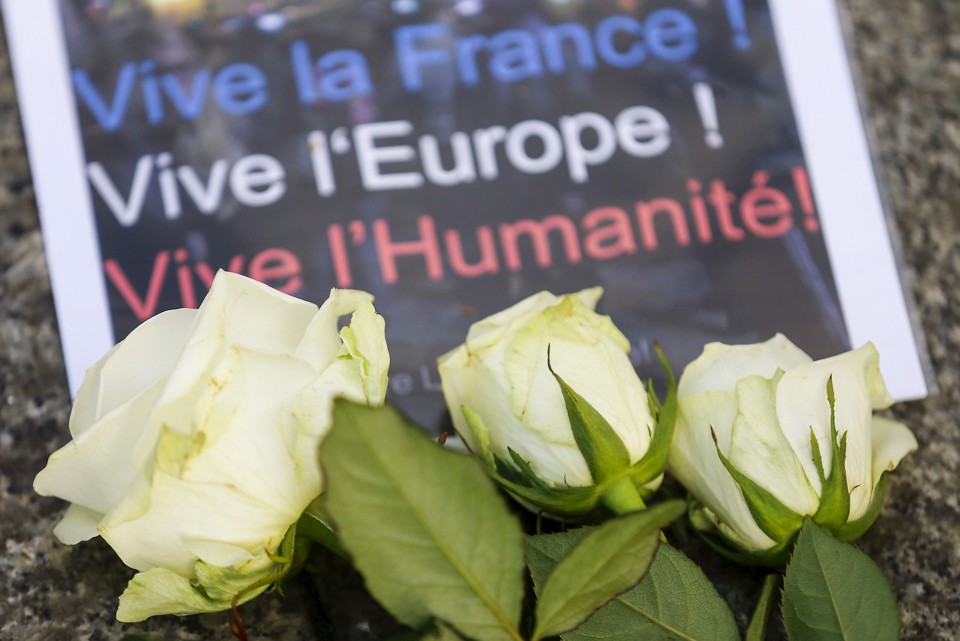 Whereas in contrast the Beirut attacks were written in a manner that described the event through a statistical and political lens. Statistical in the sense that a death toll was established and the lives lost carried no more significance a numerical value that could be released to the rest of the world. Indeed Lebanon borders with Syria and is therefore intertwined in the ongoing war across its borders but that is not an adequate reason for the media to report on the event as if it were expected and just another normal day in Lebanon . Furthermore many headlines and reports payed reference to “Hezbollah”. For example NPR (national public radio) published an article titled   “Suicide Bombing Kills At Least 37 In Hezbollah Stronghold Of Southern Beirut” . France 24 article was “Deadly explosions rock Hezbollah stronghold in Beirut. Hezbollah is a Lebanese based Shiite Muslim militant group and political party who is actively involved in fighting alongside the Syrian President Bashar al-Assad, whom ISIS an extremist Sunni Muslim group opposes.

Why was Frances attack portrayed through a loss of civilians whereas Beirut’s attack was characterized by the ethno-religious make up of Beirut and its association with the conflict in Syria? France has a military campaign against ISIS in Syria, however that fact seemed to be swept under the rug during the onset of the attacks in Paris. A New Use for Facebook’s Safety Check 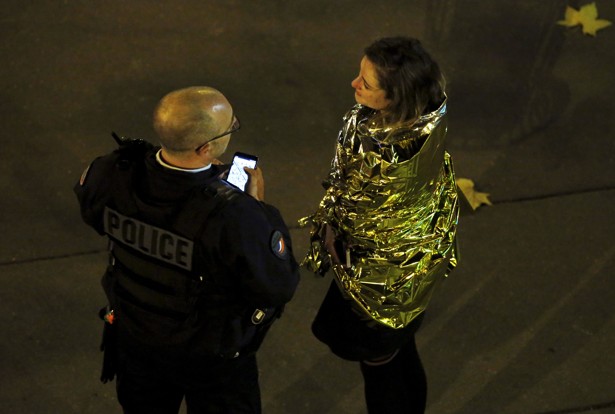 The Paris attack was the first time that the Facebook safety check in mechanism was used in a terrorism scenario. Originally the purpose of activating this Facebook feature was intended for the use in natural disasters allowing victims and citizens to allow themselves to declare their safety through a social platform. This is a great feature of Facebook and its successful implementation was felt in Paris, however it was not activated in Beirut? 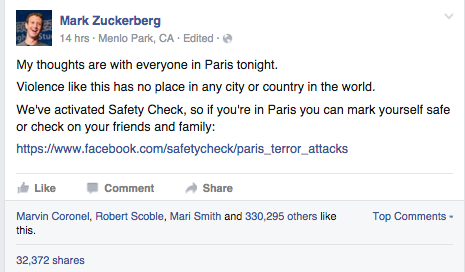 This Facebook feature has to be manually activated by the Facebook team , therefore they have the freedom of choice on choosing when they deem it necessary to be activated . Lebanon a country where over 51% of the country are Facebook subscribers unfortunately did not receive the same safety check in feature that France did. The people of Lebanon felt ostracized by this as well as the fact that no other nations bothered to light up their landmarks in the colors of the Lebanese flag as many nations did with the French flag. The Lebanese Doctor Elie Fares best captures this feeling of Lebanon” standing alone” in his blog post that was widely shared in response to the inequitable response to the Paris/Beirut attacks.

Below is a brief video between two CBS correspondents, one in Paris and the other in Ankara. The discussion is effectively describing the lack of media attention in Beirut and essentially portraying that Arab lives don’t matter as much as European lives. It reiterates the fact mentioned earlier in this blog that the majority of deaths from ISIS attacks are inflicted on Muslim people

The limitations of the readers through the eyes of the journalists

On the contrary to what has been said about the medias limitations, it is important to look through the journalists experiences that “is it the media that ignores such events in the middle east such as the Beirut bombings or are the readers to blame for ignoring the attacks?”. An insightful article by a former Atlantic news editor/journalist Max Fisher sheds a lot of light on the fact that the Beirut bombings were adequately publicized to the world as other acts of terrorism have been brought to the light in the past such as the Baghdad bombings of 2010 and more recently in 2016 the June bombing in Kuwait and the August bombing in Bangkok. He clearly states and believes that the West or rich countries do not care about the loss of lives in poorer countries included the Middle East. Other journalists reach a consensus that no matter how the headline of a story is structured nor the language used to convey the severity of the situation , quite blatantly the Western world does not care about the lives lost elsewhere in the world unless Christians or children are losing their lives . If you look at recent news in the last year published about the refugee crisis of Syrians crossing the Mediterranean or the extremity of the sabotage in Aleppo you will see that the media has photographed and documented children. Yes that’s because a drowned five year old Syrian boy   or an orphaned Syrian child  attracts attention from the Western reader . It’s sad to think that only at this stage of despair that the entirety of the West is bothered about ongoing middle eastern crisis . 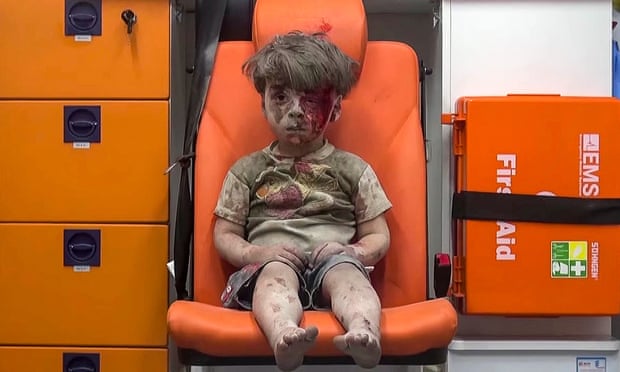 Assuming we are on board with the Journalists struggle against the interest of the reader , there are other elements in defense of the fact that the lack of media coverage is not the ailing factor in the Wests disinterest in middle eastern affairs . The Syrian refugee crisis is a known fact that is not affected or misconstrued by the media . France has seen the arrival of over 6500 Syrian assylum seekers and in accordance with this mass influx European leaders have convened in summits and meetings to assist France on how to tackle or address this situation . Lebanon on the other hand hosts 1.1 million Syrian refugees and of-course the West knows about this regardless of how the media may disclose this issue . The West is aware of this and there response has been far short of what the United Nations annual budget for Lebanon is .

Therefore in closure of this blog post to what extent is the media responsible for ineffectively portraying  the events in the Middle east in the same light as similar occurrences in the west ? and sadly to what degree is it true that regardless of how the media covers terrorism and no matter how much outcry there is in the east …. The West is not interested ? Comment on your thoughts and ideas of what you believe is the root cause of this lack of global impartiality .