A University of California (UCLA) led report has endeavoured to rank various approaches for minimising climate change. The report, which is featured in the journal Frontiers in Ecology and the Environment, looks at these approaches in terms of their public acceptance, risk, feasibility, governability, ethics and cost-effectiveness. The number one tactic for fighting climate change, as stated in the report, is reducing carbon emissions (no surprises there) and the number two tactic is sequestering carbon. Alexa Kurzuis at the smithsonian.com neatly summarises the top five methods for combating climate change without going into too much technical detail. These strategies are: reducing carbon emissions; sequestering carbon; carbon capture and storage; ocean fertilisation and, finally, managing solar radiation. This blog will attempt to give a little bit more insight into the top two strategies and showcase some examples of these strategies in practice.

The United Nations Environmental Programme (UNEP) defines CCM as efforts which aim to reduce or prevent the emission of greenhouse gases (GHGs). A CCM strategy could involve the improvement of technologies to make them more environmentally friendly, the creation of new technologies which promote energy efficiency, the use of renewable energy sources or changing business and consumer behaviour to ensure environmentally sustainable practices become central to modern living.

Now let’s look at the two strategies that will have the best chance of mitigating climate change as ranked by the UCLA led report.

GHG emissions (carbon being the main contributor to climate change) come from a variety of sources and as such so should the reduction strategies. The Intergovernmental Panel on Climate Change (IPCC) is a United Nations (UN) body which is tasked with, among other things, providing an objective and policy neutral assessment of the current scientific knowledge on CCM. In 2014 the IPCC released “Climate Change 2014: Mitigation of Climate Change”, this report details ways in which states, businesses and individuals can reduce or reverse harmful trends in GHG emissions. Before determining what can be done the IPCC needed to identify where emissions come from. The following IPCC chart shows global GHG emissions by economic sectors. 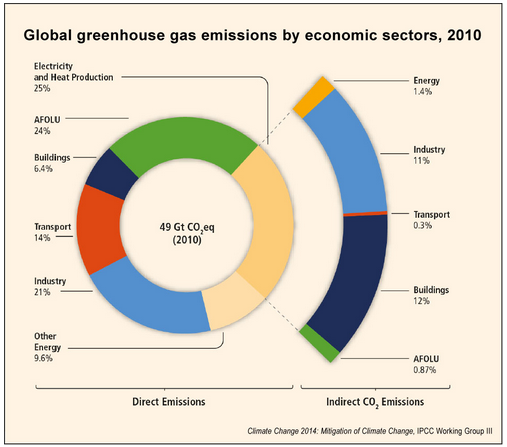 The latest attempt from the international community to reduce carbon emissions has come from the UN Climate Change Conference in 2015, the Paris Convention of Parties (COP) 21. The aim of COP 21 is to ensure there is a global reduction of emissions by ensuring all sectors within a state are reviewed and encouraged to make the transition to low carbon practices.

While some may argue COP 21 is too little too late or simply not enough, here are some of the important decisions to come from the conference.

Another initiative which aims to reduce carbon emissions in one of the largest emission producing sectors is the Partnership for Clean Fuels and Vehicles (PCFV). The PCFV is a global public-private initiative which has been instrumental in lowering the use of lead based fuels around the world over the past twelve years and through their Sulphur Campaign are reducing the amount of sulphur used in fuels.

High sulphur content in fuels leads to increased emissions of ultra-fine soot particles (which are know to cause and worsen lung diseases) and black carbon. Black carbon is emitted into the atmosphere when fossil fuels or biomass are burned. Black carbon is a strong light-absorbing particulate that has been linked to increased temperatures and accelerated ice and snow melt.

The PCFV has made great strides in reducing sulphur levels in fuels globally. 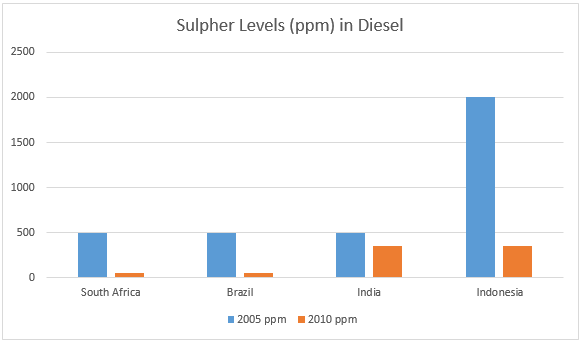 As well as decreasing the amount of harmful emissions from vehicles and increasing the quality of the air, reducing the sulphur content of fuel has a positive multiplier effect for climate change. Reduced sulphur fuels allow for the use of advanced technologies which further reduce pollutants. Advances in engine and engine component technology require the use of low sulphur fuels which means our technology is becoming more environmentally friendly while reducing the need for environmentally costly additives.

The second most effective strategy for combating climate change, according to lead researcher professor Daniela Cusack, is carbon sequestration. Sequestering carbon can be done through natural and deliberate processes which remove carbon dioxide (CO2) from the atmosphere or emission sources and store the CO2 in the ocean, plants or underground. Anthropogenic (human induced) carbon emissions, primarily through the burning of fossil fuels, results in natural carbon sequestration processes being unable to hold the rising concentrations in the atmosphere. This coupled with irresponsible land use practices, acidification of oceans and the destruction of carbon sinks (forests and wetlands) means there is an extremely disproportionate amount of CO2 which is released compared to that which can be sustainably stored (carbon uptake). 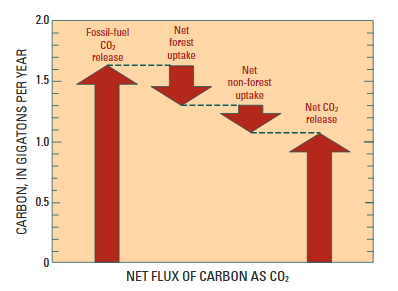 Deforestation and land degradation contribute more carbon emissions than the transportation sector and are second only to the energy sector as an emission source. Like the reduction of sulphur in fuels has a positive multiplier effect for climate change deforestation and land degradation has a negative multiplier affect. As the forest are reduced and land becomes degraded there is an emission of carbon and a reduction of existing carbon sinks which would sequester atmospheric carbon deposits.

The REDD+ programme creates financial value for carbon which is stored in forests. REDD+ offers incentives to developing countries who reduce emissions from forested lands and invest in low-carbon sustainable development. The programme is designed to work through three phases to ensure efficient, effective and transparent implementation of the initiative.

Phase one is about “REDD+ Readiness”, this involves countries developing national strategies, policies and action plans in collaboration with relevent stakeholders to build capacity for the demonstration and implementation REDD+ activities. During phase two the strategies, policies and action plans which were proposed during phase one are demonstrated and tested. Areas where additional capacity building, technology development and transfer of skills are also identified. Phase three is about results-based actions being implemented. Results are measured, reported and verified under the guidance of the UNFCCC and countries are then able to access results-based payments through the programme.

Capacity development and technical expertise to support the implementation of the REDD+ programme in developing countries is provided through the UN-REDD Programme. This enables countries to build the necessary technical capacity to implement REDD+ activities and comply with UNFCCC reporting requirements which are necessary to receive results-based payments.

These are just two types of strategies being conducted at the international level which aim to reduce carbon emissions. There are many more. And even more operating at the state, regional and local levels. However, an international approach may not even be sufficient in reducing global GHG concentrations and avoiding harmful global warming. Daniela Cusack puts it best “the perfect option is reducing emissions”. If you are in a position to make a change in local, regional, state or international carbon emissions then you probably already know about the IPCC, UNFCCC and the various other groups working toward the 2030 Sustainable Development Goals (of which climate action is one). But, if you are reading this and wondering – what can I do? What can the average person do to play their part? Take a look at this article about an English village which has become a model for carbon neutrality.