Hunger is one of the most urgent issues that people in over the world consider today. Nowadays, in the world, there are 795 million people who are suffered by the hunger (World Food Programme, 2016). One of the reason why the hunger occurs is the food loss or food waste. Therefore, in order to reduce hunger, addressing food waste is one way to do it.

As I attended to the Universities Fighting World Hunger (UFWH) Conference Thailand 2016 in which the hunger, undernourishment, malnutrition and food waste were mentioned and discussed. Thus, in my last blog, I want to find out the food waste in Asia.

Food waste: What is it?

“ Food loss and food waste refer to the decrease of food in subsequent stages of the food supply chain intended for human consumption. Food is lost or wasted throughout the supply chain, from initial production down to final household consumption” (Food and Agriculture Organization of the United Nations).

The loss of food or food waste happen at every step of the food chain. The problem occurs in production, handling and storage, processing, distribution and market, and consumption.

In the world, 28% of the total food waste are from the Industrialized Asia (Japan, South Korea, and China), while the South and South East Asia waste 21%. The number showed that the level of wasted food in Asia is very high – nearly 50%. 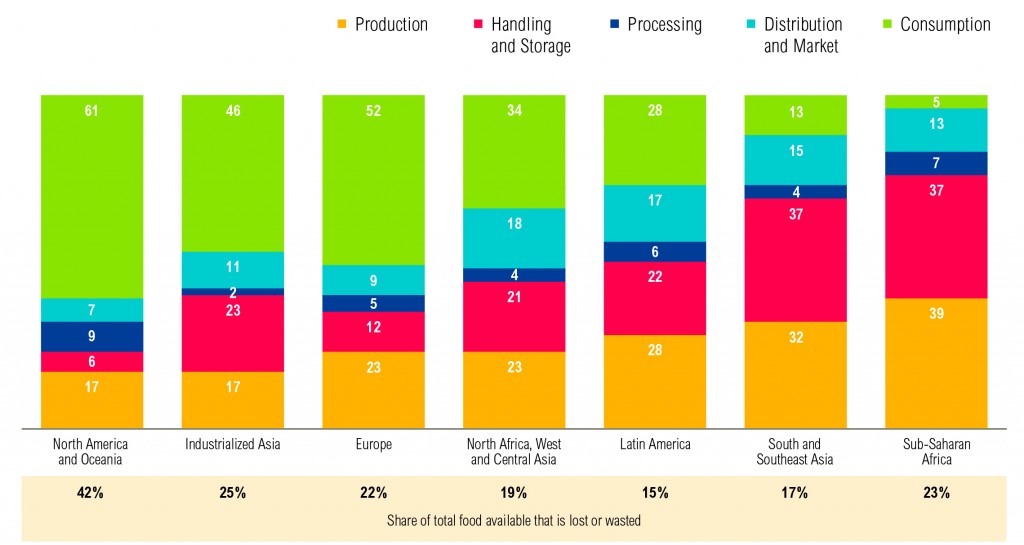 There are differences between developing and developed countries in the ways they waste food. In medium- and high-income countries, the food waste happens at the final consumption phase of the food chain. Thus, in Industrialized Asia, the consumers contribute 46% of the food waste.  The percentage of food waste in the other early stage is lower than the final stage since they tend to have more efficient equipments, facilities for harvesting, storage, transport and packaging. In these countries, the food is wasted before it is used because of food spoiled, improper preparation or people just throw out what they do not eat. (Environment Reports)

On the other hand, in developing countries, the resources of food waste are from the production and handling and storage phase. Lower-income countries in the South and South East Asia region have the food waste problem because of the poor equipments and facilities for harvesting, storing, transporting. In other words, food is wasted because of inadequate storage equipment/ techniques, inadequate roads and distribution systems. Therefore, they lead to the post-harvest spoilage before food reaches the market. In addition, the developing countries in South East Asia region waste almost 80% of all the rice they produce annually (Amrutha Gayathri, 2013). In contrast, people in these countries do not want to waste food when they have it at home. Therefore, the consumer losses are lower than developed consumer losses. This is due to the fact that they spend a lot on food in order to survive (the Asia-Pacific region is home to 536 million hungry people, or 62 percent of the world’s undernourished)

There are many required inputs which are used to produce food. First of land, this is land. It needs to be fertile and cultivable. Hence, in order to develop the arable land in Asia, the forests are cleared.  By clearing forests, the biodiversity is reduced, and the endangered species are threatened as well as the water cycles are changed. After the first step, the farmers input the fertilizers and pesticides. This step will help the farmers to have good yields. However, the fertilizers and pesticides contribute to cause the Green house gases. In addition, when both of them are used improperly, they will emit the water pollution. The amount of water used for agriculture is 70%, and it is nearly 90% in India. Last but not least, in order to harvest, process, store, and distribution, the energy is used such as gas, oil, etc. And it also contributes to the Green house gas emission. (Asit K. Biswas, Matthew J. Kastner and Cecilia Tortajada, 2015)

Most of the food is supplied from the developing countries. Thus, reducing food waste helps to increase the food availability and accessibility. Moreover, it also helps to provide better food security

In addition, all the results of the inputs in production stage will be reduced when we limit food waste. In other words, we can reduce the climate change, habitat loss and water pollution and scarcity.

Food and Agriculture Organization estimates that just a one-quarter reduction in the food wasted or lost globally, it would be sufficient to feed the 870 million people suffering from chronic hunger across the world.

The “ Save Food Asia – Pacific Campaign” was launched by the Food and Agriculture Organization (FAO) together with Asian Institute of Technology. The campaign’s purpose is to reduce food loss and waste post-harvest losses as well as the food waste at the final consumption stage of the food chain.  Furthermore, before this campaign, the FAO and the United Nations did provided the footsteps of existing food waste-reduction efforts, which consist of the Save Food initiative and Think – Eat – Save campaign.

This campaign gives some recommendations in order to save food, such as Kids Corner, Tips to save food, Find recipes for using your left over food, A new trend: Doggy Bag.

Additionally, this campaign also launched some activities in South East Asia countries such as Cambodia, Malaysia, Myanmar, Singapore and Thailand. For example:

We waste one third of all the food which we produced. Which means we wasted one third of what we input in producing process in term of time, money and effort. Moreover, when we waste food, we waste not only food, but also waste land, water resources and energy that we used in order to produce food.

We maybe can not solve the lack of equipments and facilities in harvesting, storage, transportation individually. But we can first change our behaviour of using and eating. Remember that there are 795 million of people who are suffered by hunger.

Therefore, Let’s do as the campaign from the FAO and The UN: Think, Eat and Save.