In recent day, people tend to improve their quality of life, therefore there is an increasing in spending more time and money to travelling in order to have relax time after working. Tourism industry all over the world develops rapidly. It becomes one of the important industry, which contributes a lot in GDP of every country. All the beauty spots which are from countryside, beaches, mountains, etc. are used to attract tourists. Nevertheless, besides the economic values, the environmental aspect should be considered as well. In this blog, I want to mention about the bad situation that how most of the beaches in Vietnam are ruined

Vietnam has a long “S” shape which includes a coastline of 3,260 kilometers excluding islands. It helps Vietnam has a lot of beautiful beaches along whole country from the North, Middle to the South of Vietnam. These beaches provide a large amounts of contribution in the tourism industry in Vietnam. They attract not only the foreign tourists, but also attract local tourists. More and more tourists come to these beaches everyday. However, with the development of tourism in these beaches, the pollution issues are increased as well. They can be seen from the trash and garbage everywhere and most of them consist of plastic bottles, beer cans, leftover food, plastic bags. The litter will cause pollution of water and air. 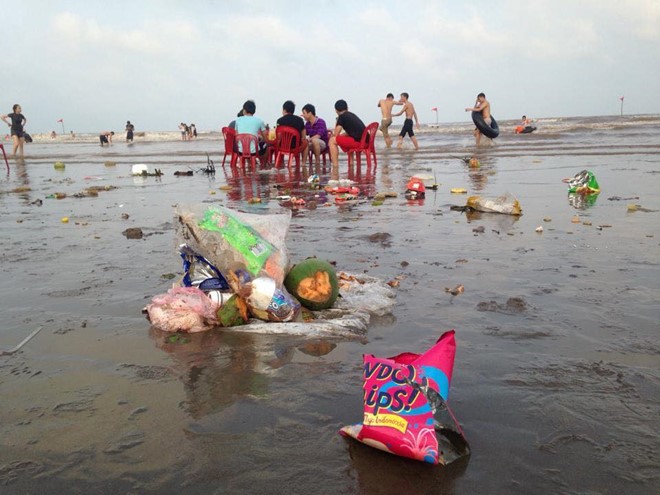 Sitting on beaches, hundreds and thousands of picnickers and tourists enjoy the beautiful views, open spaces and forget the hot temperature as well, especially in summer. They were eating, drinking and after that did not clean. They just simply left everything in the water, and on the sand, rocks. That litter ruins the beautiful beaches. What a shame that most of the trash and garbage were left by local tourists. It is sad and disappointing. These bad habits cause a lot of pollution problems as well as cause bad image to foreigner people.

Foreigner people who come from developed countries which has developed waste management systems within their countries may feel very strange about these situations. No sorting trash bins are provided and Vietnamese people get used to put every trash in one bin. Furthermore, there are not enough trash cans in scenic spots in Vietnam. Therefore, local tourists just leave the litter behind when the trash bins are not provided. This is the most convenient way according to them. In some cases, they are just lazy to walk a little bit far away to leave the trash in the bins. The lack of awareness is also the reason of this bad habit. They do not think that is a big problem, thus the environment is not cared. Moreover, local tourists, partly think that this is not their responsibility, there are trash pickers who have responsibility to pick up the trash and garbage. Even when the government gives signs and billboards which are used to remind the tourists keep green and clean environment by throwing the trash in litter bins. However, they still seem to refuse to do it.

There are some campaigns from local government, which help to clean the beaches, for example an anti-littering campaign was announced by Da Nang authorities which give a fine to tourists who are caught because they left the trash on the beaches. Within this campaign, tourists will be fined up to 100,000 VND (4.5 USD) for leaving cigarette butt and 200,000 VND (9 USD)  for disposing other types of littering. (Minh Hung, Thanh Nien News, 2015)

Under the views of foreigner tourists: Bad habit, bad image

Local bad habit causes a lot of problems, one of them is disappointing from foreigner tourists. Sustainability is one of the most important things in the world nowadays, people tend to be more friendly to the environment. The awareness about keeping clean and green environment is increasing day by day. Therefore, there is no doubt that this bad habit from local people cause a bad image to foreigner people. Tina M, who went to Phu Quoc Island in 2013 said that “[..],We spent all afternoon admiring the natural beauty of long beach until we decided to do a walk, as soon add you step off our property the beach is littered with plastic bags, bottles Styrofoam and all types of wrap. I saw a fish washed ashore with something stuck in its mouth, [..], The trash simply ruins the natural beauty of this place. I’m surprised this problem isn’t mentioned more on this board because I feel like we are wasting days here where we could have gone somewhere else”. (TripAdvisor, 2013). It is difficult to travel agencies as well as tour guides to explain to foreigner clients that why local tourists leave their trash everywhere they go. (Minh Hung, Thanh Nien News, 2015) 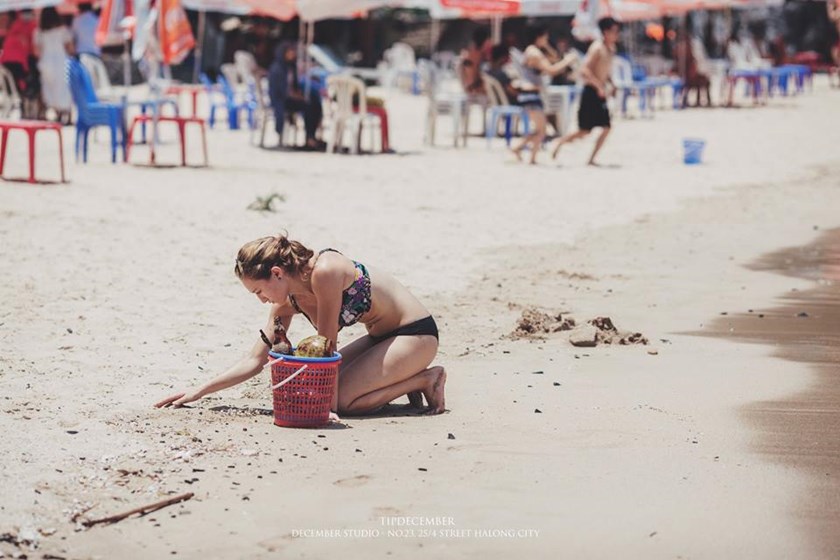 Moreover, while local people do not care about the trash, foreigner people help to pick it up in order to clean the beach. Mr Pham Ngoc Long, the photographer, took two pictures about two foreigner women who did pick up beer cans, coconut shells and snack bags at Cat Ba Beach, Hai Phong. In these two pictures, they did it while other tourists are swimming and relaxing in the background. (Minh Hung, Thanh Nien News, 2015).

As it was mentioned above, some signs and billboard were provided with the messages to all tourists that please clean up the trash in order to keep the beaches clean and green. Moreover, a vehicle which can travel on sand was also invented to collect the garbage. However, it still does not have more success. The trash and garbage are still on the beaches, since the local tourists still do leave it behind. This is because the foundation of the problem is the lack of environmental awareness of local people. More education regarding to environmental protection should be provided in order to raise awareness. Furthermore, the strict laws/policies should be a good idea for the sake of break these bad habits. For instance, you can be fined 300 USD for leaving just a tiny piece of trash in Singapore (Adventurous Miriam, n.d.).

In Vietnam, there are still more important and serious environmental issues. However, public trash and garbage in beaches, river banks, mountains, countryside and so on should be considered as an urgent and visible problem. Individual actions directly affect it as well as it can be solved if people put a lot of effort on it. We did it by ourself, therefore when it comes to the consequences, we can not blame it to anyone else. According to me, please remember that the nature helps us to survive long times ago, from generations to generations. Thus, we need the nature more than the nature needs us. Taking care of each other is the only way that both us and the nature are still exist.

Last but not least, local tourists, please wake up and clean the environment. If we do not do it, we will ruin our own life.