Imagine: walking in the burning sun for countless hours day after day, almost nothing to drink and 300 kilo on your back, would you like it…? Probably not. Elephants can’t speak for themselves and unfortunately elephants die just for the pleasure of tourists. Recently Sambo, an female elephant that used to take tourists through Angkor Wat, Cambodia, died. She couldn’t handle the working conditions. If you google “elephant riding” you will see beautiful pictures of tourists sitting on the back of an elephant. It looks like they’re are happy, but what really is happening in this popular tourist industry is horrible and unfortunately still many people don’t know that. This blog will focus on the shocking truth behind elephant riding in Thailand. 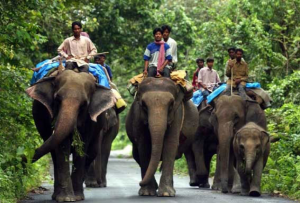 Figure: These animals have to walk day after day, just for the pleasure of tourists. They work under tough working conditions.

The use of animals in the tourism industry

Animals are being used in the tourism industry for many years now and it happens all over the world. According to World Animal Protection (2016), 550.000 normally wild animals are in the hands of tourist attractions. They assume that every year 110 million people tourists visit wildlife attractions. Taking pictures with baby gibbons/slow lories, visit dolphin shows, go swimming with dolphins, go on elephant rides and visit tiger temples, is it all possible. It is not a different story in Thailand. However, in this country the capital of the elephant industry is located. In Thailand elephants are used for logging, begging and elephant riding. Elephants have to pull heavy tree trunks, work for many hours on streets in big city or carry tourists on their back. Many tourists see a ride on the back of an elephant as a must-do during their trip to Southeast Asia. Most of the tourists don’t know the story behind elephant riding. In a study about wildlife tourism around the world it became clear that 80% didn’t know that wildlife attractions aren’t good for the wellbeing of animals.

Use of elephants in the tourist industry

Elephants are sacred animals and are threatened with extinction. According to Gemma Annan from Thailand Elephants (2014), this is an organisation that supports elephants, there are 3000 – 4000 elephants working in the tourism industry in Thailand. That’s a lot, especially if you compare it with the 2500 – 3200 that still life in the wild. So, more elephants are in captivity than where they belong, the wilderness. There are also possibilities to do a trekking tour of more days. The minimum wage in Thailand is around 300 bath daily, for mahouts (trainers of an elephant) this is around 250 bath. Most mahouts chose their profession based on a family tradition. They grew up with elephants around them. Around the age of 10 the training starts. For them it is quite normal to treat an elephant in an horrible way. For mahouts it isn’t cheap to buy an elephant. Mahouts live most of the time in rural area, like in the North of Thailand. For them it is their income. So, they want to try as soon as possible to make the elephant ready to carry tourists on their back. And sell many elephants to owners to make money out of them. Elephant costs approximately 20.000 euro and therefore the animal needs to work hard to earn the money back that was invested in them pay. For approximately 15 euros per person you can already ride an elephant for 30 minutes. So, in this case it would sum up to 333 hours of work.

How they catch an elephant

Elephants in this industry are captured in the wild. Not only elephants are captured in the Thai jungle, but they are also coming from Burma. They catch the elephants in an atrocious way. An baby elephant is easier to train than an adult elephant. There are different methods, one notorious method of capturing the animal in India is the elephant manhole. They tried to lure the elephants with food, however there is a manhole which baby elephant would fall into. A baby elephant falls in a manhole and cannot get out. The family ties of elephants are very strong. Mother and aunt elephant do everything that is possible to prevent abduction, many times it ends with the death. Elephants hurt themselves during the fight with mahouts to prevent abduction or mahouts shoot them dead, because they are in danger. They take the baby elephant away from his family and leave the adult elephants confused behind. The baby elephant is now on his way to start a dreadful training…

How they train an elephant

As the image below shows, to make an elephant suitable as vehicle takes a whole process. Once the elephants are captured, they are trapped in a very small cage where they barely fit in. Their whole body is tied with ropes or chains, so he can’t move anymore. When I imagine that I’m getting chained and can’t move, not even take a single step, I will be probably get desperate and lose my courage after a while. That is exactly what happens with the elephants. The elephant will be locked up for many hours. But that’s not all… The elephant will get beaten with sticks and stabbed with knives until they do what is asked of them. As you can imagine the elephant will have terrible wounds. In this link, you can watch a movie about what they do to elephants to make them suitable as vehicle. Please note: images can be shocking. Moreover, the elephants don’t get any food or water and need to be awake for many days. This is done with one goal in mind:

After this training method, they are actually mentally broken. This ritual is called “Phajaan” or “the crush”. Elephants are intelligent animals; they will never forget what will happen when they won’t listen to the mahouts. There are examples where elephants attack their trainers after being rescued, sometimes until death. I will not cheer when a trainer is attacked until death, however a hard kick in the male genitals is certainly earned. After this brutality the elephants are ready to transport tourists, to beg in the streets or to drag logs out of the woods. This image makes me angry and cry, what does it do to you? 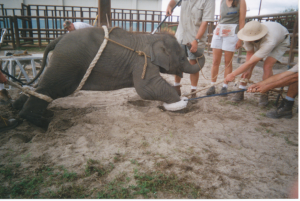 Figure: Elephants are captured and locked up in a small cage, with ropes everywhere around the body. So they can’t move. This is the first few step of the process: “breaking the spirit”

Luckily we have the Thai’s law that stands up for these atrocities… Oh wait. There is currently NO law in Thailand with regards to the animal welfare. There is only one mention in the Criminal Law, stating that: “it’s illegal to commit an act of cruelty towards an animal” and that the maximum penalty is one month in prison or a fine of 1000 THB or both. In practice, little is done to prevent mistreatment of elephants. Mistreating elephants is done in remote areas, often in small communities in northern Thailand, it’s hard to catch people thereon. In Thailand, there is corruption and occasionally there can be an eye squeezed shut.

After reading and researching the brutality of elephant riding in Thailand, I’m happy to say that something is going to change in this industry. The World Animal Protection (2016) shows that 100 travel companies worldwide have stopped to promote elephant riding. More and more people are aware what’s going behind the “happy’ elephants. Elephant riding has to stop, right now! However, I know that many people are involved. Mahouts earn money to sell elephants that are suitable to ride on. This is their job and they need it to get food on the table. Probably they know that they treat elephants in a bad way, but do they have a choice? For them it is hard to say no to elephant riding, because it will affect many families if elephant riding is to be stopped. And I think it should be banned by the Thai law. The government of Thailand must offer them a different way to earn income. Community Based Tourism would be an example of a good way to earn money. The Thai government should ban the ownership of elephants for tourist attractions. However, as this blog already described; the Thai government is corrupt. I’m afraid that elephant riding will continue, as a black market.

So no law can change it, we have to change it. As a tourist you can make a difference. Don’t ride an elephant and remove it from your bucket list, okay? There are a lot of alternatives, such as elephant nature reserves! If the Thai government were to ban elephant riding, the 4000 elephant could be brought to camps and start their “normal” lives again.

Please share this information to others if you heard they would like to ride an elephant in Thailand. Together we can already make a big step in saving the elephants!

Tipprasert, P. (2002). Elephants and ecotourism in Thailand. GIANTS ON OUR HANDS, 157.
Kontogeorgopoulos, N. (2009). The role of tourism in elephant welfare in Northern Thailand. Journal of Tourism.