Ever seen the movie: Never let me go?

This movie is about people who are cloned in order to provide organs for the people who are born in the ‘’ real ‘’ world. The clones do not know they only exist to give their organs away and because of this face a slow death. But a small group finds out and are trying to escape. Since they are just normal people, only they have been cloned instead of born. Their whole lives they are trying to prove that they have souls just as human beings do.

There are people in this world to whom this is happening. In our world there are people who sell the organs of others due to human trafficking. Every hour there is a human organ sold in the black market. The most sold organs are kidneys and livers.

The definition of human trafficking entails according to the Victims Protection Act of 2000: The recruitment, transportation, transfer, harboring or receipt of persons, by use of force or other forms of coercion, of abduction, of fraud, of deception. For exploitation of the prostitution of others or other forms of sexual exploitation, forced labor or services, slavery or practices similar to slavery, servitude or the removal of organs’.

As you can see there are unfortunately many forms of which human trafficking can be used to earn money. To create business and even huge illegal industries.  There are 4 ways of how organ trafficking is related to human trafficking. At first, sometimes the trafficker forces the victim to give an organ. Secondly, when victims agree on selling an organ but are not paid afterwards or less than the amount that was agreed upon. Third, persons who think they are being treated for something (mostly vulnerable people)  and they wake up without certain organs. The migrants are most often placed in the third category. And fourth, the traffickers promise the victims a job, the victims follow the traffickers. Then they take the people and take their organs.

How come, that such a cruel industry can grow?

Simply because the demand for organs is much higher than the supply.  For example in 2014 in the US alone 123,175 people requested a lifesaving organ. 4,453 of these people died because there were no organs available. The most requested organs are kidneys, and yes people can live with one kidney. So for poor people it is an easy decision to get a lot of money for donating one, and even save a life.

Almost 9 out of 10 times, the poorer Asian countries are the providers for the wealthy countries in Europe or America. However the black markets are everywhere. In the past few years there were some illegal practices discovered in Turkey, China, Ukraine, and many more in the US, Europe, Asia and Africa.

An interesting development of the growth of these black markets is the organ tourism. If you are put on a waiting list of about a year in America the choice is easy to go to China where you can get an organ within a month. We are talking about a life here, why would you wait. But in my opinion : choosing for an illegal organ is the most selfish thing someone can do. Because then you estimate that your life is more important than that one of another human being. This is not how I would want to live. However many do demand the black market , since they value their own lives more important than someone else’s. 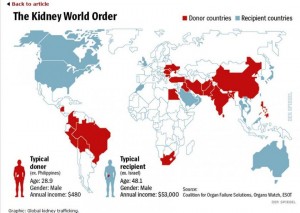 The surgeons who perform these illegal practices are called transplantologists. There was one very interesting video online which is unfortunately recently removed. In this video  Dr. Zaki Shapira openly spoke about his practices. He is now in jail for the third time already and he has performed over 4.000 illegal transplant surgeries. This is an incredibly high number, especially if you think that this is only  one of many transplantologist.

Why are people willing to sell?

The core driver for people to sell their organs is poverty.  These  people are desperate and are willing to do anything for their families. However the traffickers persuade the victims. The victims are often not educated and have no clue about the importance of their organs. The traffickers tell the people that organs are like mango’s in a tree. If there is one removed, others will grow back. Of course these victims are also not aware of all the risks of the surgery.  The victims do not know that after losing an organ their live will be affected. Without a kidney for example, the productivity of people is much less. The immune system is decreased, people get tired quickly and they are more vulnerable for other diseases.

Also, directly after the surgery the victims need good care and special care for someone who lost an organ. Of course this is not the case. The wounds are often infected, inside and outside. A lot of men die from a urine infection.  The victims are misled, often they are willing to give up their organs in exchange for money. But the victims do not know what the risks are. They do not know that many who give away an organ get nothing or almost nothing in return, and even worse, die because of their injuries.  Once the organs are collected the victims do not get paid at all, or get a much smaller amount then promised.

But the worst cases are the people who are doing this unwillingly, people who are forced or drugged by traffickers or even by family members. The worst story ever was about an Israeli girl who was forced by the man she loved to donate her kidney. The famous millionaire knew that he was receiving an illegal kidney. After the girl recovered her man left her to be with someone else. He left her together with the money she got for her kidney. And of course, then she die because of infections. There are many horrible stories (which I hope are myths) about people who were drugged and woke up in a bathtub filled with ice, to find out they have been cut open.

So, why is there no government who is interfering?

Most governments have banned illegal organ transplants however there are 8.000 illegal transplants every year.  There may be a law but obviously there is not done enough to execute this law and control this matter. Since it is as well the responsibility of the government to help its citizens against human exploitation.

What shocked me the most was an article with its intention to create awareness about this disgusting business. This author had to close the comment section because people were trying to sell their organs in this section.  I hope most of them were trollers, but still, I cannot believe that people are either joking about this or seriously consider selling their organs after this.

Yes, it is easy money. But is it worth dying for?