When I decided to study in Thailand, I already knew the country was famous for its sex industry. I already knew that Thailand was famous for its sex industry. When I walked around with a friend with blond hair and blue eyes on Khao San Road, I was surprised to see how much attention he received from the beautiful young Thai ladies. I became curious of what was the cause of this desperate behavior?

Therefore, I decided to do some research about the history, supply and demand in sex services in Thailand. A person who provides a sexual activity to someone in exchange for a payment, this is the definition of prostitution. However what is sex tourism? Sex tourism is when  a tourist comes to another country with the purpose of purchasing a sexual service provided by locals  (women, men and children).

Thailand has a long history behind it in terms of prostitution, because of the fact that prostitution is one of the oldest professions in the world. The demand and supply in sexual services has developed over the years. The Thai culture is characterized by Buddhism and has a huge population of people who follow the Buddhism religion. When you believe in Buddhism, your entire life is revolved around purifying your karma. If a person decides to work in prostitution in order to purify their karma it is their own choice. Buddhism is not against prostitution, on the contrary they see something positive in prostitution.

When the Chinese guest workers came to Thailand, they also imported the sex service into Thailand .  The Chinese guest workers who came to Thailand were unsatisfied with their work conditions. One of  the solution to satisfy them was to offer them sexual services. In 1800 most of the prostitutes were from Chinese origin. Later on the service was taken over  by local Thai people instead of migrate Chinese sex workers. That was the beginning of the sex trade industry in Thailand which developed into a service in exchange for money now a days.

During the Vietnam war in 1960 till 1970, the Thai and US governments made an agreement on allowing American soldiers to come to Pattaya, Thailand for ”rest and recreation”. Due to the high demand in the sex service, the service became a profitable economical source for the government.  Untill 1960 prostitution was legal in Thailand and all the profit gained in the sex industry was fully controlled by the government.  After the Vietnam war the Thai government continued  with promoting the sex industry in Thailand due to its profit. According to C. Wielenga (2006) from $5 million USD in 1967 to $20 million USD in 1970 were all provided by local Thai people.

Reason behind the huge supply in sex trade.

There are several areas in Thailand with a high level of poverty and unemployment.  Woman, men and children choose for employment in the sex industry in order to gain an income. According to P. Heim (2012), the government cares little about the wellbeing of their citizens and low financial support leads to several disrespectful kinds of employment such as prostitution. However, there is not only a financial reason behind choosing to work in the prostitution, there are also cultural reasons behind it. According to Hofstede (1997), the Thai community is strongly characterized with a collectivistic culture. They gain a high value for family, extended family, relationships, cooperation, responsibility, duty, tradition and harmony within groups. Groups matters are more important than individual issues. Furthermore, Thai people rather speak in terms of ”we” instead of ”I”. Opinions from family or groups are worth more than societal rules and regulations. Because of the collective culture of Thailand, the Thai people feel responsible for taking care of their families. This strong feeling of responsibility begins at a young age. Children are involved in making money for their family in return of the dept in raising them up. Furthermore, in undeveloped parts of Thailand parents rather prefer to a have daughter born than a boy, because a daughter is worth more and could work in the sex industry. According to J.P. Singh (2007), “The earnings of one daughter in Bangkok can support an entire family in countryside, and many rural villages are made of such families.” An average payment earned by an escort in Bangkok is around $4,000 USD per month. This in contrary to the average Thai salary of $4,700 USD per year. and keeping in mind that the citizens who live in the poor agricultural northeast of Thailand, live on less than $2 USD a day. Furthermore, according to several sources an estimation is made that there are approximately 60,000 children active in prostitution under age of 18 year. The Children’s Rights Protection Center in Thailand states as well that 40 percent of the children involved in the sex industry in Thailand are under 18.

The huge demand in sex service

There is a reason for the huge supply in prostitution because there is a huge demand for it. Approximately 10 million tourists arrive in Thailand each year. According to P. Green (2001), an estimation is made that of the 10 million tourists 60 percent is male and 70 percent comes particularly for sex. Nevertheless not only tourism has a large influence in the prostitution, there is also a demand by local people in sex service. So what is the motivation for 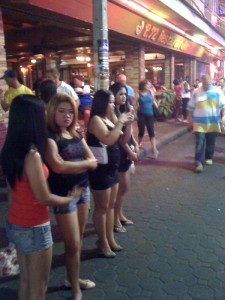 this particular tourist to travel miles in order to get sex?  Thailand is recognized as a low cost sex service country where not only the sex service is cheap but the accommodation, food, drinks and travel costs as well. Furthermore the Thai sex workers treat their customers in a way that their customer beliefs this is the way a woman should act or be. As mentioned above, due to the collectivist nature of the Thai people, who are polite and willing to take care of and serve their customers. Furthermore the feeling of a beautiful Thai lady next to you will of course please the ego of the male tourist.

To summarize, because of the fact that the Thai history is characterized by a strong believe in Buddhism, the arrival of Chinese guest workers who imported sex trade within the country and the agreement between the Thailand and America during the Vietnam war made Thailand a hot spot for prostitution. Because of the poverty and unemployment in Thailand, the huge payment within the sex industry makes it attractive for Thai people to work in the industry, even if it is disrespectful as human. There is always hope in the mind of the Thai women to find the white prince who could supply her family with money and give her the opportunity to a better life in a Western country. We need to take into consideration that when the supply stops the demand will stop and of course when the demand stops the supply will stop. However this is not only an internal problem within Thailand. The constant demand from tourists makes it difficult to prevent sex service.

Proskow, A. (2002). Trading Sex for Karma in Thailand: An Analysis of the Reciprocal Relationship Between Buddhist Monastics and Thai Prostitutes.