In the previous two Blog entries the rather negative aspects of environmental management in Thailand got pointed out. Finally, in my final Blog entry it is time to say where Thailand is doing great with environmental protection.

Four projects or campaigns will be presented. Those projects or campaigns try to mobilize something and contribute to the protection of the environment. Whether they do something big or small, the effort and the will to change is something what counts. There is no ranking presented and it is not about who is doing the most or the best, because every small step counts and all projects have in common that they want to convince the locals to contribute to the protection of the environment and they want to change current behavioural patterns.

The Erawan waterfall and national park

The Erawan Waterfall is located in the Erawan National park. There are 7 steps of the waterfall and one can swim in each. It is a long and difficult way up and as it is in Thailand quite hot one needs of course lots of water. But what to do with the water bottle as soon as it is empty? Most people throw it away and destroy on the one hand the environment and on the second hand the nature of the National park and thirdly, damage the flora and fauna in the National park. So I thought the management of the Erawan National park found a good solution. After the second step there was a station where one has to pretend the own water bottle and they marked it. One has to pay 20 Baht deposit and on the way back one has to show the bottle again and if one still has it, the one gets the 20 Baht back.  Unfortunately, I did not find any information about what happens with the 20 Baht in case you do not get them back, but it would be nice if they would use that money in order to protect, the animals, flora and fauna in the national park.

Tesco Lotus – no plastic bag campaign and the Green Points

Tesco Lotus launched its no plastic bag campaign in only two Tesco Lotus stores in Koh Samui and Phuket in December 2013. The campaign started quite successful with decreasing the amount of plastic bags with 10,000 in the first two months. (Bangkok Post, 2014)

Tesco Lotus one (2014), reported that their campaign ensured the reduction of around 14 million plastic bags in 2013. This is an enormous number, but as I described in my first blog, around 73 million plastic bags are used daily in Thailand. Thus, 14 million plastic bags a year is only a tipping point on a hot lava stone. However, it is a good start and other stores should think about realizing a similar project. In 2014 Tesco Lotus opened one more store in Bangkok and they started a new campaign. They established in their stores the Green Point. Every customer who does not use a plastic bags gets rewarded with 100 points and if the customer buys a reusable bag, it gets rewarded with 500 points. With either the no plastic bag campaign and the green points they want to raise the awareness of the customer and want to stimulate to do not use plastic bags anymore.  (Tesco Lotus one, 2014)

Mangroves for the future

Mangroves for the future is a partner-led initiative, which is co-chaired by the International Union for Conservation of Nature and the United Nations Development Programme.  The aim is to promote investment in coastal ecosystem conservation and in particular to firstly, conserve the mangrove ecosystem and secondly, to improve the living of the local communities. They host several projects which cope with mangrove restoration, buffer zone recovery and responsible fishing practices. In order to improve the living of the locals they offer support to prepare for the climate change and natural disaster. (Mangroves for the future, n.d)

In order to get a better understanding of what the Mangrove for the future initiative is doing I present you one of their works done. In 2015 they restored mangroves in Samut Songkhran in cooperation with the Marriot hotel and the International Union for Conservation of Nature. Together with the local community they used an environmental friendly way to plant mangroves and bamboos. The community has to face coastal erosion and the reforestation of bamboo and mangroves will help the community to fight against the coastal erosion. However, not only bamboo trees and mangroves got planted, the community got trained and educated about how to fight against the coastal erosion and to achieve more effective and sustainable coastal management. (Mangroves for the future, 2016)

Next to the four projects I presented, there are, many other things in process. 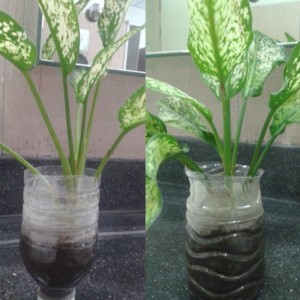 As already stated in the introduction, the small things count as well. At the women toilet in my university are the plants for example in old plastic bottles planted, those bottles are not thrown away directly any more or old plastic bags are used as bin liner. When I went to Koh Phi Phi and Koh Lanta a few weeks ago I had to pay a little amount when entering the islands in order to contribute to the environmental protection and to help that both islands are kept clean. In my last blog I shared my experience of a coral planting activity I joined. The organisation is doing as well a good job when it comes to the protection of the environment and ecosystem of Thailand.

Especially the Thai communities try to involve environmental protection in

their daily life. There are many community projects going on, where the communities learn how to integrate environmental friendly practices in their daily life and how to deal with the climate change and possible natural disaster. The International Union for Conservation of Nature hosts many of those projects and to give 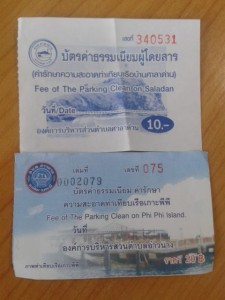 one example. They prepared sharing lessons in three villages in the Chiang Rai region. The communities of eleven villages visited the three villages and observed in which extend the villages are adapting to the climate change and how they can integrate the work in their villages. (IUCN, 2015)

To conclude, only few projects/campaigns have been presented but those stand for the work of many other projects and campaigns. Every effort in the right direction, the protection of the environment and ecosystem, counts, whether it is small or big. In most projects and campaigns in Thailand the communities of the small villages are involved as they have to learn how to protect them selves against the natural disaster and the climate change and how they can integrate practices to protect the nature in their daily life.

I hope I gave you a good insight in the environmental situation of Thailand with my last three blog entries. In case you want to read my previous ones again. 1. Plastic bags vs. Paper bags – A comparison and 2. Thailand and its environmental problems And if you miss something, which I should have mentioned, please feel free to leave a comment under one of my blog entries.