It all started with the fall of the Qing dynasty, the last dynasty of China. While building the peoples republic in 1950, Mao ZeDong called out to the nation and encouraged his people to have as many children as possible to create manpower and strengthen the nation. Especially according to Marxism, everyone is equal and working for the greater good of the community. “Power and security is driven by economy and economy comes from work, without population to work, there is no growth of the nation to benefit all” claimed the great dictator to his people. The propaganda doomed any kind form of birth control. Mothers who gave birth to many children were described as heroin. As in many average Chinese families, the greatest generation and the baby boomers generation are currently aged as our grandparents because in that period of time it was seen as normal to have 5 or more children, preferably with many sons. As showed in the graph below, an average family had from 5 up to 7 children. After exceeding a population of 800million in 1970. Although through state educational effort which lowered the fertility rate from 6 to 2.7 in 1978, china’s population still climbed to 1.3 billion, which is threatening to halt economic development. 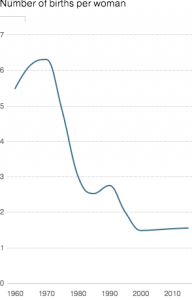 Therefore in 1979 the communist party released the radical law, the so – called “one child Policy. The new marriage law obligated the family to practice family planning and are allowed only to have one child, further child would be punished against the law with sever consequences. The punishment includes huge fine, which is impossible to pay and the lost of job in any governmental institutions in and no any social benefits in any aspects. If you were in the communist party, having one extra child would ruin your life without any other way out, such as losing the entitlement of employment and important welfare benefits. Other punishment is that women, who had more than one child, are forced to sterilisation.

For centuries Chinese families have reflected Confucian ideal, which contains the values of filial piety towards the parents, such as respect, obedience and the obligation to care for the elderly parents, while the collective sense in the culture encourages to put the family needs and honor before personal desire. As the patrilineal system is the key to traditional Chinese family and gender value, it is crucial to have a boy in a Chinese family. Since the gendered family roles are patriarchal and patrilineal, the male line of descent gives precedence to the eldest male in the family, which makes the heir vital and keeps the family name intact and the survival of the family. Additionally traditionally seen married women are considered as the property and become a part of the husband’s family.

Another negative effect of the radical restriction is the Illegal abortion, due to the patriarchal culture. It was very common as soon as the couple know it is a baby girl they will consider termination due to its tradition. As one most shocking case in 2012 was the human right abuse in relation of one child policy. A woman, who was seven months pregnant, was forced to abortion, which was conducted by family planning officials in Shaan Xi province, which is located closely to the capital city. The result is the outnumber male in China nowadays. For instance Beijing’s single male are 20% more than females according to the survey by the cities statistics bureau in 2016.

A consequence as followed, mothers of the only son goes to the public as in parks and holding sign to look for potential daughter in law. Other stories as women today can choose her husband from the “booklet” with different profiles. There are 20 to 30 million young men in china, who are not going to able to find a wife.

The one child polity also lead to another huge problem china is facing: the impact of country’s ageing population. The survey also indicated that increasing numbers of women and men are staying single and delayed getting married and as well higher education diploma in the city, which is the reason for declining birthrate as record low in the past five years.

One extreme example of the county Rudong, once was the lead of the one- child policy, where they started already 10 years before the policy. Now they are facing a severe problem: in 1997 the City already has a negative growth and in 2014 it has already 30%, with age above 60 years and if there is no significant changes the population will have 50% seniors in 20 years. An other survey of 28.000 couples in the same county, who are eligible for two child policy, are only 11.6% willing to have second child.

On the scale of the entire china, a projection conducted from the United Nations Department of Economic and Social Affairs predicted that Chinese citizens who are over 65 would increase to 219 Million and 440 million with age of 60, which makes up to one quarter of the entire population by 2050. This means a significant portion of residents will age out of the labor force. Furthermore the working force population, aged between 15 and 59 fell by 3.71 Million last year. Even with the reversal plan of implementing two – child policy might be too late, since the children who are born this year wont even enter workforce. In 2013 a relaxation nationwide of allowing over 12 million couple to apply to have second child, only about 12 % of the eligible couple applied.

As the Chinese party stated in an official news agency called Xihuua, that the implementation of the new policy is an active response to the ageing population in order to balance the population development. Some sees this regulation as greater personal freedom, but is it not the continued control of the communist party, which is only going further? Although the loosening of the policy can be seen as positive and Chinese citizen is celebrating on social media, but it is unlikely that it will have no long lasting demographic impact, especially in the urban areas, according to a demographer at the Shanghai Academy of Social Science. Time has changed with it the social structure and new economic pressure as well in China, many young couples prefer have only one or none children.

In respect of human right, the government should not intervene or have power over neither women’s choice of having nor how many children. China has been acting too long in controlling of their people’s choice and decide for themselves and forcing its population of doing what its think is better for the nation and release law to regulate its nation’s populations personal life. The right step of Chinese government is to end such invasive and punitive controls over people’s decision making of family planning.