Imagine living in Thailand, the country that is known as the land of smiles and where the weather is always sunny, this sounds pretty pleasant right? Therefor foreign citizen mainly see Thailand as a big holiday destination, however with the knowledge of the notorious use of sex trafficking. But when you for example Google Thailand, only tropical islands, beautiful temples and other wonderful pictures will pop up.
This results in a distort image from the reality, for example looking at the many poverty in the country and the current situation of refugees living in Thailand. Therefor, this blog will be focused on the actual living conditions of the refugees related to Thailand.

As I mentioned the view of Thailand is distort when thinking the state is only about peaceful citizen. Especially while focusing on the life of refugees that live in Thailand, where those specific refugees do not even have the status of being a Thai while living in the country. They have not been given the official nationality and rights of a refugee, because the state has not signed the UN Refugee Convention, which will be explained later on.
However, it is very intense that citizen, who are forced to fled to a foreign country do not even got recognized with equal human rights as they have in their own country, because of safety reasons. The dishonest treat of Thailand, which is not officially recognizing their refugees’, results to very restricted rights and an extremely limited social network for the refugees.
The refugees literally got positioned in one of the nine camps situated in the rural, which are disconnected from proper hospitals, big cities and the ‘real’ Thai citizen. This makes the refugees depended on aid and assistance from outside, because it is even illegal to leave the camps.
Within the camps there are ‘officially’ health care opportunities offered, but that is provided in a way lower level than actual is demanded, which is still making the refugees depending on the help from outside. The main health problems in the refugee camps are researched as domestic abuse, many mental depressions and other social health problems, which cannot be healed within the health care the camps offer. For example a Burmese refugee who stayed in the Nu Po camp descripted his situation and experiences while living in the camp, which unfortunately relates to the mental health disorder. His words were; ‘’It is so strict to live here. There is nothing to do. I am not allowed to go outside the camp. There is no job, no work. So much stress and depression. I feel that I am going to go crazy here’’.
Anyway, not only health care is a concern, also other restrictions arise since it is illegal to leave the camp and this results to actual limitations of freedom, the ability of having a job, build up a proper future and leave them depending on the help from outside. By living with those restricted rights no interaction or participation in the Thai culture does occur and is therefor degrading the level of their human rights by being detained in one certain location. 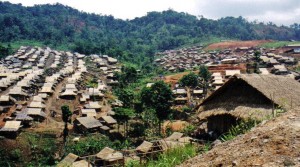 By researching the status of refugees living in Thai camps, it shows that the overall refugees consist of 26 different nationalities. The nationalities with the highest amount of fled citizen are shown in the table bellow, just to give you an imagination of the main origins within the camps.

As you can see the amount of the different nationalities are very diverse, where each individual refugee has a particular time to stay. The actual period that refugees have to stay in a Thai camp depends per individual situation.

Once they are allowed to leave the camp and start building a life in Thailand ‘itself’, another concern appears that Thai citizen will keep seeing the refugees as foreigners and ex-refugees and are not socially accepted as Thai citizen.

Why not signing the UN Refugee Convention?

In 1951 the United Nation came up with the first International Geneva Convention, which could be signed by all the member states. By signing the convention it would contain that refugees have; the freedom of religion, right to work, ability to study, accessibility of moment and travel documents. Following on the convention the United Nation adjusted this to a new protocol, which could be singed to remove geographical and time limitations that where mentioned in the original Convention.
However, Thailand decided not to sign one of the conventions and therefor does not officially recognize and accept their refugees. You could already tell, that this is inconceivable and Thailand should allow its refugees to move so they are able to find work and interact with Thai citizen. This will even contribute to the Thai economy, which also should reduce opportunities due to exploitation in the labour market.

Can you imagine being a refugee, where you have to live in the same surrounding 24/7 and you have to life by very restricted rules?
The best understanding of their actual living conditions can been created by researching various experiences of refugees who actually lived in refugee camps. Therefor, I will start with a quote from a 22-year-old woman from Burma who lives in the camp Mae La; ‘’Living in the camp is similar to living in prison, because I can’t go outside or make my own decision. I can commute only I the camp. The camp is surrounded by barbed wire. If we go outside of the camp Thai police will arrest us. In the long run it effects not only my physical also my mental health’’. This is already giving a picturing what effect and experience the camps hold for the refugees, although there are way more stories of understandings and backgrounds found that lead to other unfavourable living conditions.
For example, the overcrowded amount of citizen living in the camps is making the living conditions impossible to be bearable. Besides, living with that many people, in the same so called houses and surrounding leads the residents without any privacy. This means that it is never quiet, you do not own any private space, and you live in a very dangerous zone when fire or infectious diseases are circulating.

Another shocking mark of the refugees camps is getting to understand how children actually live in the camps. Many children grow up there and see the refugee camp as the whole world, because they are not allowed to leave and experience the ‘real world’. They grow up with the fact that everyone is scared to walk away and their only reality so far is the one within the camp.
However, the camps do provide re 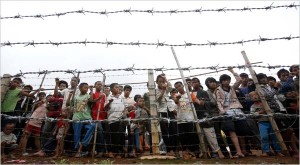 putable education for the children, only with limitations in the higher education opportunities and is mainly not identified outside the camp.

Making the subject refugees even more reliable, I would like to refer to a recent incident of last year which is all about Thailand returning Uyghur’s back to China. First of all, Uyghur’s are an central Asian ethic group which are mainly, 80%,  found in China’s province Xinjiang where they fulfill the major ethic minority. Generally, the most Uyghur’s are Moslim and speak Turkic, which is similar to Turkish.
However, Thailand returned more that a hundred Uyghur’s refugees, back to China. This went quite sudden, which even shocked the UN regarding the human rights of the citizen. Although, Thailand has its various reasons, where the main reason is related to the ethical obstacle, since Thailand currently only identifies 6% of their citizen as Moslims besides the Buddhism. Therefor the ethical reason of returning the Uyghur refugees is basically to stop the fair of a rising islamic population, which also would have changed the Thai culture.
Another reason of the decision of Thailand could be related to the economic relation between the two countries. Since having various Uyghur refugees is not beneficial through economic compulsion.
Anyhow, to provide you with more detailed information for a better understanding of the current situation, I would like to direct you to read the very interesting link bellow.

The actual picture of a refugee is made. Therefor, it could be conclude that the basic needs of human rights are low to such a degree that Thai refugee camps show unsatisfactory. This could be the reason of not signing the UN refugee convention, which can change the refugees living condition and provide basic human rights. After investigating many experiences within the various camps, evidence shown that Thailand should change their policy to improve the living conditions, their current situation and opportunities regarding to the refugees.