Many people probably know that Thailand is not the richest country in the world and that it has severe issues poverty wise. Some may know that Thailand has some very rich people and families. Thailand has grown to be an upper-middle economy since 2011. Although in every country there  are issues of this kind, Thailand has one of the biggest numbers in poverty. The gap between the two income classes seems  very large. Why  does this very hospitable country have so many poor residents? And is everything in Thailand what tourist see of it?

What about the economy?

Thailand has seen an immense economic growth in the 1980s  and the 1990s. In the early 1960’s Thailand had a poverty percentage of about 57 percent, which in 1988 was reduced to 22  percent. However this was not visible in all regions. In and around the Bangkok metropolitan area poverty dropped to 1 percent . In North Thailand a seventh of the population remained poor and in the North 20 percent.1
Bangkok, a large urban area with high skyscrapers, large shopping malls and great restaurants. As well Thailand in general has many developing cities, large beaches and touristic places . Overall Thailand does not look as poor as it is to the happy holiday tourists. However over 7.3 million of Thailand’s people are considered poor . With over 80 percent living in rural areas and slums around the big cities. 2

Bangkok is not that rich and beautiful after all.

The Bangkok slums consist of Cambodian refugees, people who fled from their flooded rural homes and drug addicted Thais. Most of them live in self-made  houses or abandoned buildings. When walking through them you will see garbage , dirty streams of water and stray dogs. However some of the residents keep their home surprisingly clean and sacred. Many want to leave their homes and try to build up a better life, but many can’t. A slum couple told a journalist of National Geographic that they wanted to leave but couldn’t because 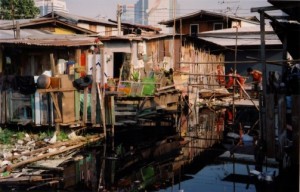 together they made only 3,000 baht per month. Regardless of not being able to leave their life was bearable they said, as the people help each other out. If a family has food they share it with others in need. Also crime rates seemed to be quite low as everyone respected their place. The scarier thing s for the people are fires and floods as not all the houses are sturdy enough.

There are many people in the slums trying to make the all-day lives of the people better. For instance Father Joe Maier, who is a Catholic priest in one of Bangkok’s slums. He has taken care of some kids which were on the edge of being trafficked or had been abused by their parents. one of these kids had scars on his arms because his father wanted to make him look more pathetic in traffic  where he was forced to beg. Other kids had been saved from being used I  the sex industry. Now he has given them the chance to go to school for the first time in their lives. Another woman named Prateep Ungsongtham Hata was raised on the coast by her parents who were fishermen. Once they lost everything in a storm they moved to the slums to restart their lives. Now Prateep has opened schools and a health and drug program in the slums  to help such kids mentioned before to do the same and get out of the slums.3

Despite these great people and the great mentality in the slums. More and more people under  which children who never got loved  die every week, due  to poor and unhygienic living conditions or because of diseases.

What about the other income class?

On the contrary Thailand has some very rich and young rich people who seed of all the benefits and the economic bloom in Thailand since the 1980’s. In 2011 the richest 20 percent made almost 60 percent of the income in Thailand, which  is the highest among its neighbors. To put it even  more in perspective, the combined wealth of the four richest families in Thailand is about 12 percent of the Thai GDP (which is the monetary value of all finished goods and services produced in a country’s boundaries).
Some of Thailand’s richest are rich through decades and generations, other s through built up businesses which could be considered  as small empires. For instance one of the ric 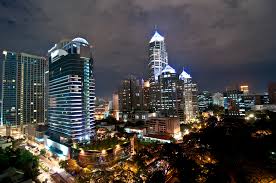 hest families was build up by a man who started a small Bangkok seed shop. Now this small seed shop has made the family the  richest in Thailand worth approximately 9 billion dollars. Others invested in the right projects which brought Thailand to where it is right now. 4

Most of the ‘rich’ families stay wealthy as they can afford good education and healthcare. Which in Thailand means a big deal as you need education to earn more and get better jobs more than in almost any  other country. And with the better jobs you get more money. This is the main subject the government is talking  about when trying to close the gap and to get rid of poverty. As the lower classes can’t get well paid jobs because they only had primary school education.

What do you think?

Thailand has a beautiful image, what I mean is that Thai people tend to show off a lot. Big cars, modified cars, great looking houses and designer clothing (even though most is not the actual brand). This is what you will see in the big shopping malls in Bangkok and on the main streets. I tend to think this is because of the fact that outside Bangkok (and the other big cities) people aren’t doing so well, but want to look like this as Thailand has been fairly poor for a long time. Though now Thailand is economically growing every year, with whole parts of the country staying behind, people try to seem to fit into the  ‘new society’. Which is something to think about.

Is Thailand  going to keep growing economically or will it stagnate as only the big cities seem to be  developing. Will Thailand be able to close the gap between the poor and the rich? I am not too sure.