My last blog entry dealt with the question whether plastic bags or paper bags cause more harm to the environment and the result was that both have negative impacts on the environment.

Plastic bags are a big issue in Thailand, but they are not the only environmental issue in Thailand. Next to the plastic bags are the air conditioners present in every room in most houses, as without them, life is not pleasant in the heat. Furthermore, Thailand has to deal with a lot of environmentally harmful traffic jam. Especially, in the big cities, such as Bangkok, the traffic jam can be really bad, and a lot of gasses are expelled to the air.

Despite, those three big issue there are other issues which contribute to the environmental damage in Thailand. There are six main issues which present the environmental problems within Thailand and properly outside of Thailand as well. The six issues are (I) The climate change, (II) Intensive farming, (III) Water pollution, (IV) Air pollution, (V) Resource depletion, and (VI) Waste management.

The climate change has a direct impact on Thailand, as already several extreme weather events took place in Thailand in the last years. You want examples? Here they come: The tsunami in 2004, the drought in 2010 and the flooding 2011. This are only three examples but already two of them show how uncertain the weather becomes. Or how comes that in 2010 there is an extreme drought and in 2011 an extreme flooding in the country?

The climate change will have a threat to Thailand, as they are depending on agriculture and tourism for instance. However, if the weather is constantly changing from drought to floods the rice harvest will not be successful, as well as, not much tourist will visit anymore Thailand. (Ping, n.d.) Or do you want to make holiday in a flooded country? Well, I do not want that.

Thailand is also called the “rice bowl of Asia”, as Thailand is the second main exporter of rice in the world (WTEx, 2016) and 49% of the labour market are present in the agricultural industry (Kisner, 2008). Moreover, the contribution to the GDP is with 10% an important factor. Thailand is depend on the rice industry and thus, intensive farming is performed. Many famers use fertilizer, pesticide, and herbicide in order to sustain their harvest and to make their living. However, the massive amount of chemicals used will be lead into rivers, soils and will end in groundwater. (Ping, n.d.)

Talking about chemicals in the groundwater, water pollution is a huge problem in Thailand. One should not drink tip water and even brushing your teeth with taper water is not good for your health. In Germany I did not spent a single euro on water anymore, because I just got it from the tap at home and in the restaurants you are able to get tap water as well. Cannot imagine doing it here as well. But what is the reason for the health threat of water?

Hays (2014), estimates that around 1.26 million tons of toxics are lead to the canalisation, rivers and sea per year in Thailand. Most of it will not be cleaned and therefore, will come to our households and ends as our tap water. Of course, drinking highly toxics water is not healthy. Ping (n.d.), states further that in 2009 around 92.7% of Thailand was threatened of water pollution. However, the water gets not only polluted by chemicals of the agricultural industry. The origins of water pollution can be found at petrol stations, landfills, leaking sewers and septic tanks for instance. Polluted water will ooze into the ground water and as soon as the ground water is contaminated, the household water is contaminated as well. (Ping, n.d.) 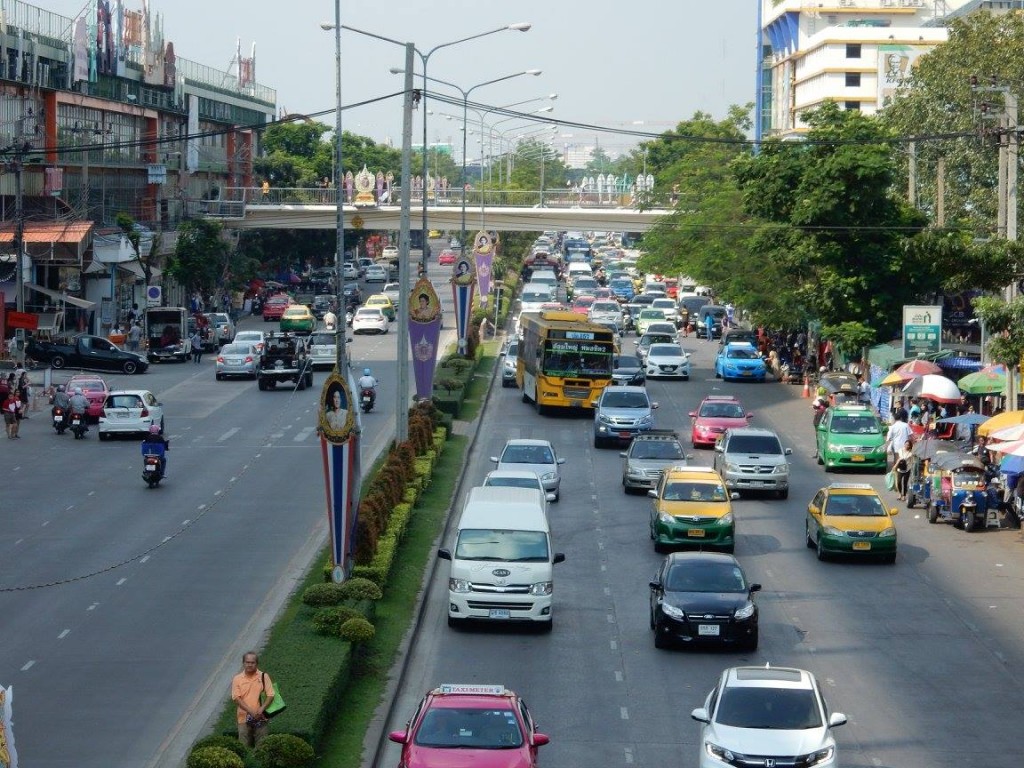 The air quality index (AQ) showed for Bangkok at the 10th of March, 2016 71, which is still moderate, but for example the index showed for Berlin was 54, Dublin 32, Mumbai 151 and Beijing was 53. There are countries in which the air quality index is worse than in Bangkok, such as Mumbai, but there are cities where it is better such as Beijing or Dublin. (Aqicn, 2016)

Even though the air quality index did not show a really bad number, the people suffer in Bangkok from the air pollution. Many people wear masks or use special nasal sticks to be able to breathe.  Hays (2014), even reports from a man who died 1995 because of the smog in the air in Bangkok. 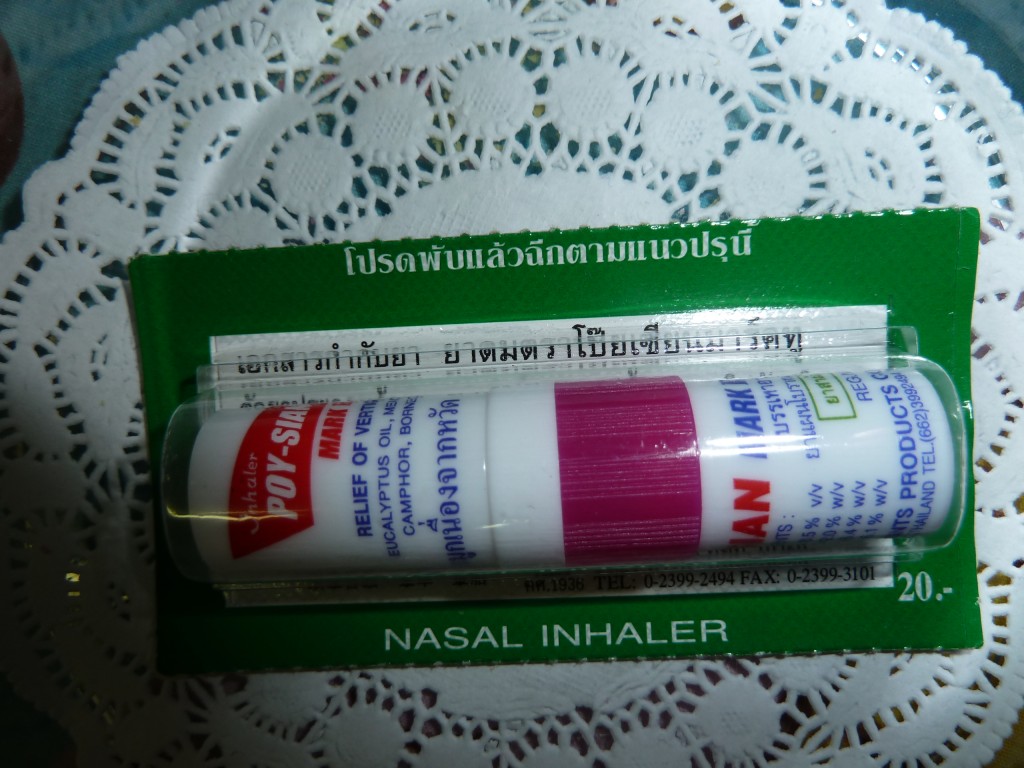 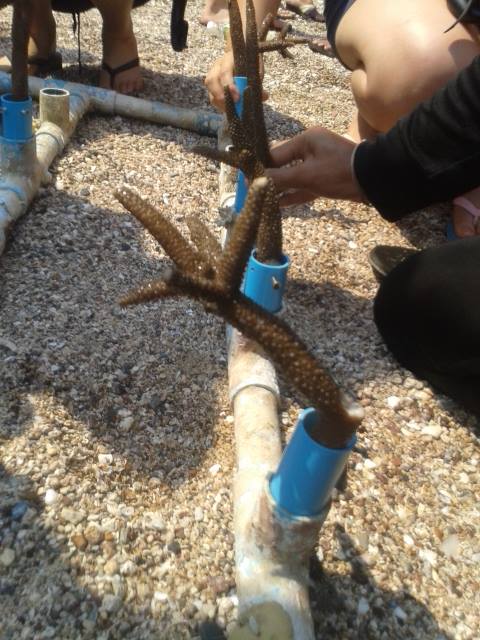 Corals are ready to be planted – Credits T.M.Lips

Thailand is rich of coral reefs, however, there are not anymore as many healthy coral reefs as before. Two weeks ago I participated in a coral reef planting activity and before we had a lecture about coral reefs and watched a few films. Many people forget that corals are animals and not plants and thus, they do not care whether they die or not. Despite the fact that corals are animals, they are important for the aquaculture and give home to hundreds of fish species. The reason why many corals die is on the one hand because humans step on them and because the anchors of ship destroy them. Another reason is human made as well – Climate change. The corals can only survive when the water has a certain temperature. In the last years, the water was always too hot for the corals, due to the climate change. Another reason describes Phongsuwan (n.d.). Due to again an increase in the water temperature, the corals bleach.

Next to the decrease of coral reefs, are overfishing and deforestation two other big problems in Thailand. In around 40 years the amount of mangroves nearly cut into halves from around 4000km² – 3500km² to 2500km² – 2000km² in 2004. If the same trend will continue, soon no mangroves will be present anymore in Thailand. (Ping, n.d.)

The Thai fishing industry has to face a lot of criticism because of several points. The two major ones are connected to human right and forced labour and the second one deals with environmental issues, which will be explained further now. It is poorly monitored how much, when, where and who fishes around Thailand. This leads to the result that illegal fishing and overfishing is a common practice. As a result the marine systems are exploited and not sustained, if this will continue, it will have huge consequences. (EJF, 2015)

In my previous blog plastic- and paper waste was already touched, thus, the focus will lay now on e-waste, or electronical waste called, as it is a relatively new phenome and it will affect us more and more in the future.

Mobile phones and smartphones count for the largest amount of e-waste in Thailand, as nowadays, one changes its phone frequency and throws the old one just away. Every one to two years a new smartphone is coming on the market and of course everyone wants to have the new one, even if the old one is still working. This count not only for mobile- and smart phones but for other electronical devices, such as laptops/computer/tablets, televisions, cameras and game consoles. Chareonsong (2014) estimates that in 2021 around 13,419 mobile phones will end as e-waste in Thailand. Furthermore, there were in 2014 no laws according to e-waste present and no formal recycling company in Thailand. So what happens with all the e-waste in Thailand? Most of the e-waste gets collected from informal sectors and what they do is another story, but Boonruang (2013), states that only 15% of the e-waste gets recycled.

I only touched a few points from many, but I hope that it gives you a good overview of how the environmental situation in Thailand is. Six main issues have been addressed. (I) The climate change, (II) Intensive farming, (III) Water pollution, (IV) Air pollution, (V) Resource depletion, and (VI) Waste management. Due to the climate change, will extreme weather events occur even more in the future than before. Moreover, is water pollution a major issue in Thailand. The water gets contamined because of multiple reasons and it is not advisable to drink any tap water in Thailand. Please keep it in mind, in case you travel soon to Thailand. Next to the water pollution is the air pollution another important aspect in Thailand. As one of the photos shows, there are lots of traffic jams in Thailand and the vehicles produce lots of gasses. However, the quality air index shows that the quality of air is still quite okay. Overfishing and the decrease of mangroves are two examples which were given regarding resource depletion and overfishing is not the only problem Thailand has with the fishing industry. According to waste management, the focused layed on e-waste, as it is ganining more importance, however, Thailand still needs to develop a law for it.

After two rather negative blog entries, the next one will address a more positive topic. Examples of where environmental protection is done well in Thailand will be presented and I hope you are as much as I interested in it. I hope I gave you some food for thoughts and please leave a comment if you want.

Are you wondering what my last bloog entry was exactly about? Read: Plastic bags vs. paper  bags – A comparison