He picks up his newly wed wife and lifts her into the room for their first romantic night together. He lies her down softly on the silk sheets, and enters her..
With all the passion and fierce that is flowing through his body. Herewith he is tearing her apart. Every muscle her small body holds, is rejecting.
And then, there is only pain until she is freed from all.
Her 40 year old husband has reached satisfaction, but no more.

Since he fucked his 8 year old wife to death.

Remember this news of 2013? An 8 year old Yemini child died on her wedding night due to internal injuries and uterine rupture. Can you imagine, giving your 8 year old daughter to a 40 year old men? Can you imagine your own kid getting children? Nearly 15 million girls are married under the age of fifteen each year. It is not as far away as you think it is. And it causes much more mess than just one unhappy life of the victim.

So, where is it still happening? 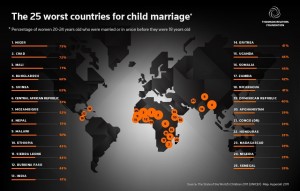 While countries with the highest prevalence of child marriage are concentrated in Western and Sub-Saharan Africa, due to population size, the largest number of child brides reside in South Asia. One of the countries with the highest number of child marriages is Bangladesh. According to the numbers of International Center for Research on Women & UN Women 66% of all girls in Bangladesh get married before they are 18. 66 percent! A UNICEF study specified this and calculated that 29% of Bangladeshi girls are married before 15 and 2% even before they’re aged 11.

There are a few reasons why Bangladesh is one of the countries with the highest number of child marriage. I will give the 3 main reasons based on: money, natural disasters and the Bangladeshi government.

The government of Bangladesh is failing to protect its girls.  In 2015 it was even considered to reduce the minimum age for girls to wed,  to 16.  Now, girls must be 18 and boys 21 to get legally married. But people falsify the birth documents if the family pays them enough money.  And if the paper says she is 18, she is 18… So there is some sort of law, but no governmental organization is enforcing it. If the girls insist, no one can do anything about it.

Child marriage does not occur on this level in Thailand, fortunately. However it is still happening, according to UNICEF 4% of Thailand’s’ girls are married before 15 and 22% is married by 18. These numbers are from a report from 2015.  In Thailand child marriage mostly has to deal with two factors: money and the Sin Sod (which comes down to money as well).

I have referred to the sin sod in my previous blog and it might also come back in the third, so I will give a small explanation of what sin sod actually is. Sin sod is a Thai tradition which entails that the groom is paying his respect to the brides’ parents. The groom is thanking them for taking care of the girl, as he will do from now on. Paying respect comes down to literally paying the future parents in law money. However the amount of money depends on the family and status. So, if parents are poor they can get some money if they wed their daughters.

As you can see, in both cases it is all about money (poverty), only Bangladesh has a bigger disadvantage due to natural disasters that push poverty.

What are the risks of Child marriage?

Risks for the girls:

Child marriage is a violation of human rights. The children are not only marrying, with marriage comes responsibility, bear children even though she is a child herself, housework, take care of their partners and children and sexual and physical abuse.

According to UNICEF children between 10 and 14 are five times more likely to die in pregnancy and giving birth then women who are 20 to 24. If they survive there are other huge health risks related to early pregnancies as well.  Since children are not ready to bear children it often leads to debilitating injuries, infant deaths, malnutrition and maternal death.Since the brides are often much younger than their groom, child brides have a higher chance of being HIV positive. Since the men are older it is more likely that they have had unprotected sexual intercourse before and children are way more vulnerable to contracting HIV and other sexually spread infections.

When girls are married off and therefore not able to continue their education, this effects their personal development and intellectual ability. The children are not  able to develop negotiation skills and will have very limited decision-making influence with her new husband. This makes them even more dependent on their husbands to survive.

Risks or the country:

If girls are not able to participate in education they lack the necessary skills to enter the labor market. They will not be able to help themselves or their family financially, which makes her dependent on her husband again.  ‘’ Child marriage makes it impossible for such a girl to be empowered.’’ – UNICEF, Anju Malhatora. This fact threatens the development of economy and stimulates poverty and gender equality*1.

How can we end child marriage?

As you can hopefully understand after reading this blog: child marriage is not only a violation of human rights but also damages the stability, health, economic development, education, violence and gender equality of a country.

In both Bangladesh and Thailand exist non-governmental organizations and voluntary work groups who are trying to spread knowledge and create awareness to change people’s minds. However, the government is responsible for its citizens and should therefore play the most important factor while changing such imbedded thoughts in their citizens minds.

Governments, wake up and take care of your girls!