As a student in Bangkok at a considerably quite rich university, it seems like Thailand really is the land of smiles. People seem more social towards each other than in the Netherlands, the country where I am originally from, and are more willing to help each other out.  In the Netherlands the majority of the population doesn’t follow a religion and people seem to be more individualistic. 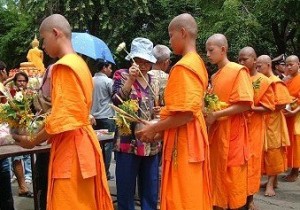 Thai people are seen as more social people and most people believe this is because of the majority believes in Buddhism.  As most of you probably will know Buddhism came originally from India but has spread more towards the Asian region.   Instead of other religions it does not include the idea of worshiping   a god that is the creator of everything, but it believes that nothing is permanent, actions have consequences and because of this change is possible.

It is about spiritual development that is meant to lead insight into the true nature of reality, the enlightenment of Buddhahood. The practices that come from Buddhism, like meditation, are meant to further develop characteristics like kindness and wisdom.   It teaches its followers to be fully responsible for their own lives. Another difference between Buddhism and various religions is the fact that Buddhism addresses itself to everybody, so it doesn’t matter what race, caste, gender, nationality or sexuality you have.  This makes this religion, in my opinion, more tolerant then most other religions and explains why Thai people are/look so social (aboutbuddhism, 2016). 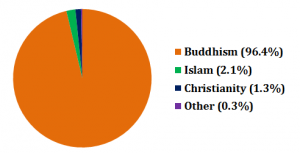 Of course crime is something that appears in every country and as a realist I believe this will continue to exist. But because of the Buddhism, and maybe because I was a little bit naive and currently live in a rich part of Bangkok, I thought that Thailand wouldn’t have a large homicide rate.  I’m currently writing an academic paper about the gun law in America and what the results of this law are and this is why I got interested in the gun situation in Thailand. As you might you know America has more guns than people and as a Dutch citizen I think it’s only logical that this results in a higher gun violence rate.

Officially you need a permit in Thailand in order to get a gun or a rifle and according different articles there are currently 6.1 million registered firearms .But there seems to be a lot of guns go “missing” and getting a gun isn’t too much of a hassle. It doesn’t help that there were many wars near and in Thailand and this had as a result that the guns still remain in this area. And on top of that guns keep being smuggled in from neighbourhood countries and this is very hard to stop (Bangkokpost, 2016).

The article tells us that according to reports that Thailand’s’ high per capital murder rate is actually higher than that of the United States. For me personally this was quite a shock, because of the previous reasons I gave in this blog.  The article also states that is the murder rate of Thailand is three times higher than Cambodia’s murder rate. To give you an idea, the murder rate in 2012 in Cambodia was a total of 964 murders and, like in Thailand, over 90% of the population should be a peaceful Buddhist that tries to reach the enlightenment of Buddhahood (Indexmundi, 2015).

But then I found out that couldn’t really trust these statistics. Because there were no official gun crime statistics released by the authorities of Thailand. The United office on guns and crime stated that in 1998 there were 23,631 homicides committed in Thailand with a firearm and the last statistic they showed was in for the year 2000, back then there were 20,032 homicides.  Keep in mind that these included attempts of homicides.  I found this hard to believe especially when you compare it with the murder rates of the surrounding countries like Cambodia. So my advice is to not think too much of it.

The same report stated that the number of prosecutions for homicides as far lower. In 1998 this was 3,654 and there were 2,508 people actually convicted. The report didn’t show any results for the year 2000. So again I don’t know how much you can trust these statistics (UNODC, 2016).

The writer James Austin Farrell. Tried to contact The United office on guns and crime in Bangkok to explain these statistics, but until now they still have not replied (asiancorrespondent, 2016). 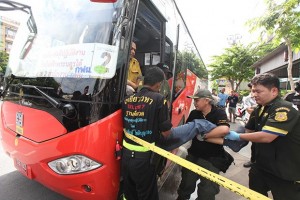 So what are the most common reasons in Thailand to kill somebody was my following question. It should be a pretty good one you think, of course no reason is good enough, but still, because of the Buddhism, I thought maybe I could somehow understand it. Some people say sometimes you need war in order to maintain peace. So because of my kind of naive approach towards this lovely country with all its nice people, I still thought that I could maybe somehow understand why all this killing is happening.

According to the article “Baffling statistics fail to hide Thailand’s worrying gun crime problem” by James Austin Farrell it happens over what you could call trivial matters, especially the ‘loss of face’ and business disputes are the most common reasons. For example:

This month a 20 year old female was murdered by her boyfriend because she, according to her boyfriend, complained too much about him playing too much video games. She was just a second year student at the Chiang Mai University.

Another horrible homicide took place in traffic when a foreigner got shot for flipping his finger. He was shot dead on the spot near a traffic light.  James Austin Farrell let his Thai translator translate the comments about this incident. Apparently many posters said that flipping a finger is not something you should do and that the guy deserved what he got. Of course there were other posters who disagreed.

The reason why many murders are committed because of ‘loss of face’ is explained by Police Colonel Saravoot Chandrappraser.  He said that this is most common when people are drunk.  In Thailand there is no 1, 2, 3, there is only 3.  In the Netherlands for example there is normally first some shouting and cursing, then there is a fight and in some cases it will lead to deadly violence.  In Thailand you can get in an argument and before you know it you get shot.  People simply don’t like to lose face (get disrespected) and because acquiring a firearm is so easy, it leads to people getting shot (asiancorrespondent, 2016).

What do you think?

These stories are horrible and so are the statistics. But then again I didn’t see any of it yet. To me it is still the land of smiles, but I am curious about your opinion and your experiences.  I am also interested in why do you think there is so much violence in a peace loving Buddhist country.   Do you think there is an influence from outside of the country? I heard some people talking about the influence of the United States. Please leave a reaction in the comment space below.