The concept of culture is vague as it consists of many contents such as language, behaviour, climate, food, the way of thinking as well as social roles, etc. Different countries have different characteristics, especially different cultures. Culture is a special aspect which makes a country unique compare to other countries. Even though the countries come from a similar area such as Asia, Europe or America, they also have a different culture. Therefore, it is necessary to have be aware of the differences in culture. I am Vietnamese and I came to study in Netherlands which completely has a different culture compare to my country. In this blog, I will talk about these different things in term of daily activities and Hofstede’s dimensions.

From the daily activities that I observed during my time in Netherlands, the ones which differ most in term of lifestyle, education as well as greeting and communication will be mentioned

First of all, regarding to lifestyle, Vietnamese parents think that their children are always their little children. It does not make a difference whether they are 8, 18 or 28 years old or more. Therefore, young people always stay with their parents until they get married. However, married people still live with the husband’s family. Vietnamese people would like to live together or at least live near to each other. Because it is easy to help each others, for instance dividing bills, child care, eldercare, etc. Thus, it is common in Vietnam that a family with two or three generations can live together in the one house. On the other hand, Dutch lifestyle is more open. In the Netherlands, one can moves out already as soon as the person celebrated its 18th birthday. Moreover, they also can decide to do everything they want by themselves as well as have more freedom and personal right. Hence, Dutch people are more individual as well as have a more independent personality.

The second different is about education. It is shown at school and at home as well. Dutch students have not only classes at school but also activities which they can join in order to relax as well as have soft skills for social life. In addition, they can choose what they want to study and can change the major until they figure out their goal. Furthermore, they also can have gap years when they need time to experience life. By contrast, there are many extra classes at home that Vietnamese student have to attend with private teachers. Thus, they do not have enough time for relaxing or enjoy life. Moreover, the parents will decide for their children how their academic career will look like, e.g. which school or university they will go and what major they will study. In Vietnam, the families stand in society depends on the educational level of the children. Therefore, the parents want to choose the best thing to their children and do their best to help them. Vietnamese parents would like to give a fish than a fishing-rod to their children.

Thirdly, the way of greeting is also different. Dutch people greet person they see first when they meet people they do not know. However, when greeting, Vietnamese people strict to the way they greet, they always greet the older person and the head of family first in order to show the respect and after that the younger ones. Moreover, Vietnamese people do not do cheek-kisses as well as give a hug to each other while Dutch people do. For Vietnamese people, these actions just should be done in a private place since it is so ridiculous to do them in public area or it will give bad affect when doing them in front of children.

Last but not least, there is the different in communication. Vietnamese people have indirect style, for them it is hard to say no. So that if they say “I can do but it might be difficult”, that is not mean yes. In addition, it is also important to give face when communicating. However, Dutch person are direct in communication. For instance, if they cannot do something, they will directly say no. Moreover, when giving an opinion or solving problem, Dutch people say and discuss problem directly while Vietnamese people in particular and Eastern people in general just go around and take long time to problem they need to solve.

During the studying time in Netherlands, I learned about Hofstede’s dimensions which are help to know the country’s culture as well as compare the culture between two countries. In this part, there are three mentioned dimensions will be described: power distance, individualism and masculinity. 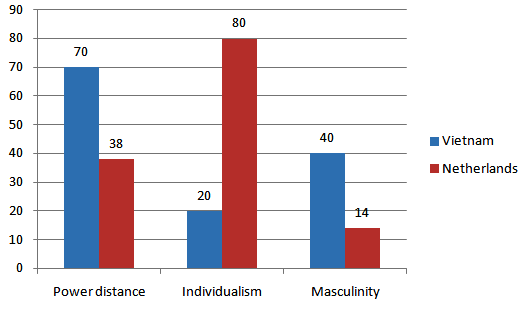 For a start, Vietnam has a high score (70) in contrast to Netherlands with low score (38). It means that in Vietnam, people accept hierarchical order and centralization is popular, for instance, in family, man decide most of things as well as man are always the head of family. Furthermore, in organization, boss is the one who can give decision-making and it is not well-received when the leaderships are challenged. Otherwise, Netherlands has more equality in power and decision-making than Vietnam, for example, decentralization in power. Furthermore the experiences are the thing that managers will count when they look at the performance of team members. Young people in this country demonstrate a preference for teamwork and an open management style. In work, they would not like the control and the attitudes towards manager are informal and first name basic.

The second dimension is about individualism. With the high score of 80, Netherlands is an individualistic country. For instance, nuclear family is strong, people in close family keep in touch and respects each other’s space. People focus more on their own duty than that of the other ones, what you do and how you live your life is your business. In work, the hiring and promotion are decided based on the quality of employees only, management is the management of individuals . On the other hand, Vietnam is a collectivistic society with the low score of 20. Extended family or extended relationships are preferred, also for the loyalty. In addition, shame and loss of face are leaded by offence. People care about their fellows and management is the management of groups.

Different countries have different cultures. Since I have been in Netherlands, I have seen a lot of different things. Knowing more about different culture is one of the best experiences that I have got when staying away from my country. The above aspects that I mentioned before (lifestyle, education, the way of greeting, communication and Hofstede’s dimensions) are just some of different thing that I saw while studying in Netherlands. In my opinion, it is interesting to learn more about different cultures in order to understand more as well as avoid bad situation which could occur because of these differences. It is also important to avoid culture shock for students who want to come to other county to study. In addition, it also helps avoiding misunderstanding between people who will meet for business.