I am a student from Holland studying International Relations here in Rangsit, Thailand. All I see on the streets are happy people, smiling people and beautiful scenery and incredible food. Though this is still true,  I would have never imagined that this beautiful country, ‘The Land of Smiles’ was so violent, dangerous and yielded so many privately owned firearms.

Every country has its own gun policies and each country has their own problems with gun related crimes. Gun trafficking is also present in every country although it might not seem to be the case. In the last couple of years there seem to be more and more gun related crimes as we can see on the news. For now I just want to focus on Thailand. by looking at the current gun policy and the most recent gun crime statistics, to see if I can find out what the downsides can be of having these gun policies and how they influence the daily life.

In Thailand you are, when having the right licenses, permitted to 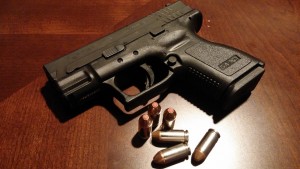 privately own handguns and non-automatic rifles and shotguns. To gain such permits and licenses, the applicant need to pass a comprehensive background test looking at personal conduct, living conditions, income and criminal records. And off course be the minimum age for gun ownership, which is 20 years. Thailand keeps records on all persons licensed to acquire, possess, sell or transfer a firearm or ammunition. All these subjects are regulated by Thai law. 1

Believed is that Thailand has around 11 million firearms in civilian hands which comes to approximately 15.6 firearms per 100 people. And ranks it at the 11th place of the number of firearms owned privately in the world. Surprisingly Thailand has only 6.7 million firearms registered. On the defensive side the military force of Thailand owns only a mere 2 million firearms and the police 280 thousand. This off course doesn’t look good for the team defending Thailand. 2

Gun related crimes happen every day in Thailand. Almost every day the news outlets show more and more gun related crimes. Either if it’s a robbery, a dispute over goods or sometimes even arguments and road rage. It is shocking to see what people are getting killed or injured for.

I just want to highlight a few incidents over the last year. A bus driver shot a man in the chest after reportedly ‘complaining several times about his driving’ and a young man killing his girlfriend, because she kept on complaining that he played too much video games. These incidents are handled by a discussion or by a harmless argument in my country. But in Thailand these ‘arguments’ will get you seriously injured or could even cost you your life. 3

Why are there so many gun crimes?

In an interview by the Asian Correspondent he found that getting away with the criminal fact is not that difficult. Some people even state that they have no confidence in the police because of corruption. Many tests and evidence to catch a murderer can be tampered with or just the lack of interest in investigating the incidents. Sometimes the police will even be paid off.

Also people in other countries go from incident and talking it out to arguing, maybe fighting to getting shot, which barely happens. In Thailand some people skip the first 2 and go directly to shooting each other. Whether this has something to do with being drunk or something else? I am not sure. 4

Do these crimes have a negative impact on tourism?

Europeans seem to be a bit scared of all the news regarding all the crimes. Some people search for alternatives and avoid going to and through Thailand. Others are not bothered or unaware. An employee of the Koh Samui Tourist Authority of Thailand said that the downturn in tourists was because the regression in Europe and not because of the security issues 5. This might be the case, but nevertheless Thailand suffered a drop of almost 7 percent in 2014 during the protests against the government. Now the country is under martial law, a big number of tourists seem to stay away of Thailand. 6 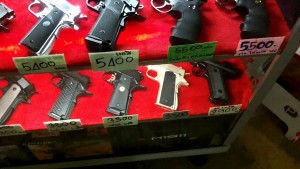 It may sound quite western and Dutch, but banning weapons could get rid of quite a few civilian weapons. Enforcing the laws more and maybe tightening the screening of gun holders could help also. These solutions are off course quite open and won’t get rid of the crimes completely, this mainly due to the fact that gun trafficking is still a large industry in Thailand. It is easy to get your hand on a weapon without going to the government to ask for a permit. As I said before about 3 million firearms haven’t been registered. Maybe the government should make more of an effort to catch and detain the criminals who commit these crimes every day. Not only to make the street safer at the moment but also to scare off possible upcoming criminals in the future.

You are almost done reading!

All in all a very hard and difficult subject to discuss and to investigate. Not only because the latest published numbers in gun crimes are from 1994, but also due to the fact that you don’t really know of these crimes happening, apart from the few published in the news.

Still after my research I am shocked at how many guns are in civilian hands and so few (compared) in the hands of the government. Shocked that there are so many crimes happening due to arguments and incidents that in the western countries are mostly handled by an exchange of words. These crimes will continue to happen and will probably increase in numbers if the investigating parties and the government won’t try to catch more of these bad guys.

Nonetheless Thailand is, even with this dark side, still a beautiful country with amazing people and food. I absolutely love my time here so don’t be scared off because of my post. Just beware of the actions you do. And don’t provoke people.