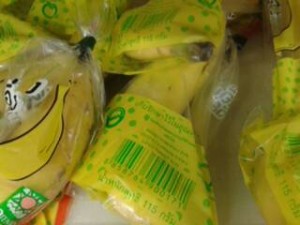 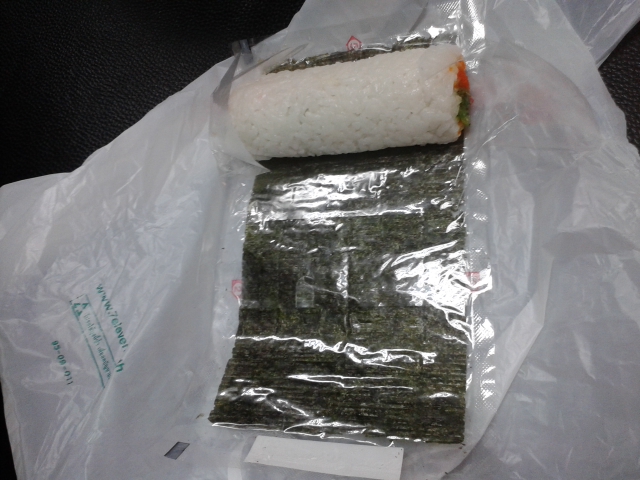 A sushi roll wrapped in 3 layers of plastic & put in a plastic bag for carriage – credit T.M.Lips

Imagine the following; you go to the 7-Eleven or another convenience store in Thailand and you want to buy a banana, do you know what will happen? In case not, I tell you: You can only buy a single banana, which is wrapped in plastic from top to bottom. When you pay the banana, the sales clerk will put it in another plastic bag for you. At home you take the banana out of the plastic bag and you also remove the other plastic layers which you will then throw away. But what happens afterwards with the plastic? Is it automatically gone, what do you think? Well, in fact plastic does not just disappear, as soon as it is thrown away, it takes approximately 500 to 1,000 years until it gets released (Ecowatch, 2014). Whereas, paper is released much faster (NaJu Versum, n.d.).

Of course it cannot be stated that nobody knows what happens next with a plastic bag of for example the 7-Eleven. As apparently the awareness of the negative impact of plastic is increasing. Especially, in Germany, my home country, it is from great importance (and a large number of people tries) to live without using any plastic at all. I am myself, a member of a Facebook group which is about living a plastic free life and it has currently (18th of February, 2016) 14,678 members and counting. In Germany a big event took place, which lasted over a year and encouraged the participants to use no plastic bags. 145,599 people participated and 10,232 people were interested in it. However, these are only the numbers of the Facebook event and, it is not officially known how many people do not use plastic bags anymore. But what is the deal with paper bags? Are they good for the environment? I have only heard negative reactions about the use of plastic, and that one should use paper bags instead. However, I have been wondering, are paper bags really better than plastic bags?

How many plastic- and paper bags are in circulation? 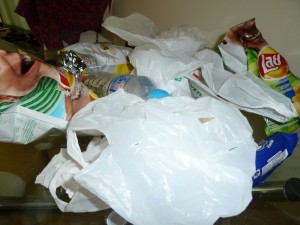 Thomas (n.d.), states that around 10 billion paper bags are in circulation in the United States per year.

What are the advantages and disadvantages of plastic- and paper bags?

It can only be argued whether plastic or paper bags are better, when the advantages and disadvantages of both are known. Thus, the most important (dis)advantages will be explained in the following section.

The major advantage of plastic bags is that they are more efficient in production, as it does not require a lot of energy and water to produce them (Barkham, 2011). Other advantages are that they can last longer than paper bags, and can be reused again for example as a dustbin liner. However, it can be questioned whether the people will actually keep the plastic bags and reuse them. As there are so many in circulation and people get 3 a day. (Ketcham, n.d.) Moreover, plastic bags are lighter than paper bags, and usable in different weather conditions, such as rain, which is not the case with paper bags.

One major advantage of paper bags is that paper is made out of a renewable resource. Once a tree gets cut, a new one can be planted at the same spot. Moreover, paper can be reused multiple times and already used paper can be recycled into new paper. Even if old paper will not be used to produce new paper, most paper is biodegradable, thus, it does not have a high negative impact on the environment. (The Officeguide, n.d.)

An estimated amount of 8 million metric tons of plastic is disposed into the ocean annually (Pantsios, 2015). Animals cannot distinguish between plastic and food in most cases and therefore, they eat the plastic instead of food. As a result the animals will die. However, there is another danger for animals when there is too much plastic in the ocean. Quite often it gets reported that plastic is stuck inside of animals or even strangles the animals to death. However, the plastic in the oceans is not only a danger to the animals, but to us, humans as well. As stated above; animals cannot distinguish between plastic and food and eat the plastic. As soon as they eat the plastic, the plastic enters their system. Once these animals get caught for human consumption, the human beings will also be affected by the plastic inside the animal. Moreover, the poison of the plastic is in the water and contaminates it – the water we swim in, we drink, the animals live in, we later eat, drink it and which waters our fruits and vegetables. (Andrews, 2012)

Another disadvantage is that most plastic bags are made out of crude oil and natural gas, both are non-renewable resources. Thus, it creates pollution due to its mining and manufacturing processes of fossil fuels (Frost, 2015).

When talking about the disadvantages of plastic, one also has to think about the resource where paper is coming from. Do you know it? Yes, correctly paper comes from trees. UNEP (2010), states that around 24 trees are needed in order to produce one ton of paper. There are some environmental friendly procedures. When for example the leftovers of trees are used for producing paper. However, there are still a lot of environmental unfriendly practices going on, when huge amounts of trees are harvested at once, due to economic reasons. (UNEP, 2010)

Moreover, it can be said that the air pollution of paper bags is with 70%, much higher than the pollution of plastic bags, as well as the contribution to the greenhouse gasses with 80%. Moreover, pulp and paper mills are considered to be as one of the worst polluters in the industry in terms of air-, water and land pollution. (Martin, 2011)

Which one causes more harm to the environment – Plastic or paper bags?

Valuing the different advantages and disadvantages, which got presented, one cannot say that plastic causes more harm to the environment than paper or the other way around. As both have major disadvantages for the environment. The production of paper bags is on the one hand far more harmful to the environment than the production of plastic bags. However, plastic is not a renewable resource, as paper is, and plastic needs far more time to release than paper. I come to the solution that both plastic and paper bags are not good for the environment, and people should decrease the use of both plastic and paper in their daily lives.

I hope you liked my first blog entry and I informed you properly about the topic. One more thing I would like you to remember, next time you go shopping please think twice whether you need that plastic or paper bag. Maybe you have already hundreds of bags at home which you can take with you.

Please feel free to leave a comment and I would be happy if you are interested in my next blog entry as well.