In the last decade, the history of the law and definition of same sex marriage has drastically changed. Already in ancient times, when the Romans were in power, it was common that two man marry each other as a sign of brotherhood. However, it was not excluded that the men did not marry a woman as well. For women, it was on the other hand not possible to live together with the same sex and marry her, because it was common that every household needs a man. This story went on over many centuries. For women who were deeply in love with each other, there was mostly only one solution to live together. One of the partners had to dress as a man and hide her real identity. In the case of the marriage between two men, it was common that they openly shared their love to each other in letters. Nevertheless, the public still considered the relationship as a brotherhood, and there was no question that men would sleep with another and have the demand to live together as a family.

This picture has drastically changed in the 20th century, were people openly wanted to share their love to the same sex and stated that they want to live together as a family. Gay and lesbian communities had been arisen with the will to fight for their right. However, in the last century, the mind-set of many people was still really conservative and not open minded about same sex couples and families. Therefore, it was not possible to change the law and those couples were not allowed to marry or live together as a registered partnership. In general, it is really hard for people to change their mind-set. It can take a lot of time and it is necessary for people to first get aware of it. Afterwards some more steps need to follow till someone changes his or her mind.

Nowadays many countries and states in North and South America as well as in Europe have allowed gay and lesbian people to marry.

On the other hand, in the Asian countries it is not common or allowed at all. However, what is more important than to look at the law of same sex marriages, is to look at the opinions of people on the allowance of such marriages. Therefore, I will compare the opinions of Dutch people, where same sex marriages are allowed since quiet a long time already, at the United States, where this law was only inured last year in 2015 and I will take a look at an Asian country, where it is not allowed to marry someone from the same sex.

Starting with the United States, it can be said that in 2001, only 35% were for same sex marriage and 57% of the public was against it. However, 14 years later it can be seen that the number has turned around and that 55% percent is supporting same sex marriage and 39% oppose it. Although in my eyes, there is only a slight change compared to the years it took, at least most of the Americans support the marriages. 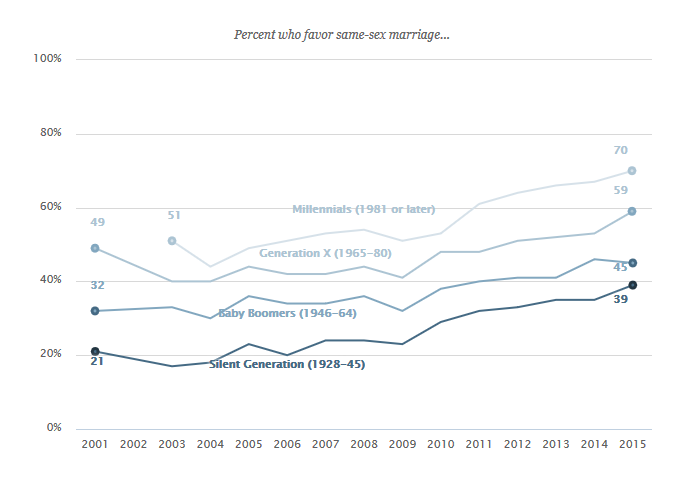 One of the reasons is the generational change, because younger generations are more supportive. Furthermore, the mind of the different generations in general has changed. As it can be seen in the chart, in 2001, only 21% of the Silent Generation, born between 1928 and 1945 spoke for same sex relationship whilst on 2015 this number has changed to 39%. The baby boomer generation has changed from 32% to 45%, the Generation X has risen with 10% and lastly in 2001 51% of the Millennials spoke for same sex marriage and in 2015 70% (Pewforum).

An online poll conducted in 2013 by the French Institute of Public Opinion states, the 85% of the Dutch population speak for legal units between the same sexes (pewresearch).

The 15% of the Dutch population that is still against the legal unit, will probably remain, since homophobia still remained after many years after the effect of the law.

The last state, I want to take a look at is Thailand. This is one of the most tolerant countries on the Asian continent when it comes to same sex sexual activities, since those are legal. However, same sex couples, marriages and households are not tolerated. Although it can be seen that in the 21st century some things related to same sex couples have changed, like for example in 2002 a law was effected that gay, lesbian, bisexual and transgender people were no longer regarded as people with a mental disorder or in 2015 the Thai Red Cross gay people to donor blood, there are still many people that in daily live oppose same sex relationships. However, what is a little controversial is that a recent poll, done in 2015, actually shows that almost 60% of the Thai population speaks for the legalization of same sex marriages and only 36% oppose it (englishnews).

Comparing those three states, it can be said that comparing the countries there are still some differences. It seems that the Netherlands is a really open minded state since eight out of ten people nowadays speak for same sex marriages. The development in the United States, is also on a good track because the numbers of people for and against these legal units have turned around. Thailand is the only country of these three examples which has not legalised it yet. However, as the numbers show there might be a change in that soon. Referring to the headline, a split world, it can be said that there are still huge differences in the states and there are split opinions about same sex marriages in the world.

Coming to my own opinion about this whole subject I can say that I do not really understand why there are people speaking against legal units of same sex couples. Every human should have the same right to fall in love, share a household or raise a family with the person he or she wants to. No one is getting hurt or harmed by it so why are there still people against it and also speaking up against it, but do not care and speak up about the topics they should? In the end we are all just humans who want to leave in a peaceful world and create the live we are dreaming of.

If you are curios and want to find out more about same sex marriages nowadays, watch out for my next blog which will be about gay, lesbian, bisexual and transgender people in Thailand.