Some countries – especially China – want a bigger chunk of the world.

Geopolitic rivalries have stormed back to the focus of politics.To be dragged back into these issues after the end Cold War is rather disturbing for Westerners. With the end of that era, many Americans and Europeans thought that the most vexing geopolitical questions had been settled with a few exceptions, for instance the Israeli-Palestinian dispute. Therefore, they shifted their politics to trade liberalization, nuclear non-proliferation, human rights, the rule of law, climate change, and so on. Now it seems that they feel overrun by the Crimea conflict.

But this is not the only conflict that proves that this chapter is not closed and there are still enough smoldering conflicts which could end up in forceful annexation and military intervention.

More and more states feel threatened by China´s search to exert greater influence in Asia and South-East Asia. During the last years, an action-reaction-cycle in the South China Sea has increased tension in the region and deteriorated relations between China, its neighbouring countries and the US as an ally to some of the states. This issue might become an indicator if China´s rise will be peacefully by using established rules or if it uses the right of the stronger one.

One country surged ahead and filed its case at UN´s Permanent Court of Arbitration: The Philippines. 1 This would be the first time that international legal experts formally consider the validity of China’s territorial claims in the South China Sea.

The dispute is about the Spratley Islands. The Spratly Islands are a chain of  approximately 235 islands, isles, shoals, banks, atolls, cay and reefs of which have 148 been named. They are situated in the center of the South China Sea and have no permanent independent settlements, except birds and turtles. They are too small too sustain settlers, most of them are even below water mark, either constantly or during high tide. Claimants are Vietnam, China, Philippines, Malaysia, Brunei and Taiwan, from which all, with the exception of Brunei, have erected military garrisons on these islands.

Second Thomas Shoal, the key land in the dispute between China and the Philippines, is called Panatag by Filipinos and often Huangyan Island by Chinese.

To whom these islands belong has already been a dispute for decades. Each of the involved countries bases their claims differently: China and Taiwan allege to have historical evidence that the islands belong to them, whereas Malaysia and Brunei interpret the Law of the Sea in their favour. The Philippines´official claim came 1971 and is based on the discovery of several islands by a Filippino citizen in 1947 and its proximity to some of the islands. Funny fact is that the Philippines government did not even support the discoverer when he made claims to the Spratley islands at that time. 2

Neglected for hundreds of years as they posed hazards to navigation, the Spratley Islands are now a venue of power games between the claimants with several physical clashes beween them; China is nearly always involved and conflicts between China and the Philippines became more frequent in the last years. 3 Both countries have competing claims over a number of islands and shoals, such as Thomas Shoal and Scarborough Shoal.

There are various reasons for the awakened interest:

Firstly to mention are the economic resources. The South China Sea is among the most biologically diverse areas in the world, rich with commercial fish like tuna, mackerel, scads, and coral reef fish. It is one of the earth´s most productive fishing zones and contributes about half of the fish eaten in the Philippines, Vietnam, and China. It also has great potential for oil and gas although it is not known how much there might be as the involved states hinder exploration of each other.

The total area of the islands is less than three square miles but each island might be important to claim the surrounding waters as an Exclusive Economic Zone (EEZ), which extends to 200 nautical miles from the territorial sea. According to the UN Convention on the Law of the Sea (UNCLOS), the EEZ gives states “sovereign rights for the purpose of exploring and exploiting, conserving and managing the natural resources, whether living or non-living…”. 5

Next to this are geopolical reasons: The South China Sea is one of the most strategic waterways in the world and the land might be of military importance for the states claiming them. It could be used for sea lane defense, early warning, and surveillance. 6

That especially China is highly active might have to do with its wish to exert greater influence and why they are doing it now has simply to do with the fact that China´s economic ascent enabled growing military capabilities and assertiveness. Other factors include growing nationalism within China and that the legitimacy of the Chinese Communist Party is maintained and consolidated by a high economic growth rate which can only be ensured if the demand for resources is met in the future.7

Power is the ultimate aphrodisiac 8

The move to file a request for arbitration in UNCLOS is part of a gambit. The Philippines did not expect China to participate in the process – which they refused to – but it draw more international attention to their case.
The UNCLOS move is only part of the strategy. The Philippines also try to influence public opinion by giving interviews and involving journalists in confrontation over disputed regions. International media were invited aboard a Philippine ship transporting supplies to a military outpost on the disputed Second Thomas Shoal. The journalists were able to witness Chinese ships blocking their way and aircraft from the US, the Philippines, and China all flying above the ship.

Filipino ship crew and media aboard the small supply boat flashed the “V” sign for peace to the Chinese Coast Guard vessel that was preventing them to get near the Islands where the BRP Sierra Madre has been stationed.

At what point do you say, ‘Enough is enough’? Well, the world has to say it — remember that the Sudetenland was given in an attempt to appease Hitler to prevent World War II … 9

BRP Sierra Madre, has been aground on a disputed shoal, which is known as the Ren’ai reef in China and the Ayungin Shoal in the Philippines, since 1999. It is used as a Philippine military outpost with soldiers living on it.

China reacted angry to these gambits and sees them as a provocation. 10 Its stance is that they would like to solve this on a bilateral basis without involving third parties. Its frustration even rises as its efforts to assert itself in the region have only tightened the links between the US and its Asian allies, especially with the Philippines with which they increased co-operation just recently when Obama visited Asia.   11 12

How important this is, became apparent in the last days, when China openly enforced their territorial claims in a region Vietnam claims as its territory by conducting deepwater drilling to set up an oil rig. The $1 billion rig is owned by China’s state-run CNOOC oil company and it has been secured by approximately 80 Chinese ships, including several naval vessels. At least six people were injured during a skirmish after Chinese vessels used water cannon and rammed into Vietnamese ships that were dispatched to prevent drilling from going ahead. 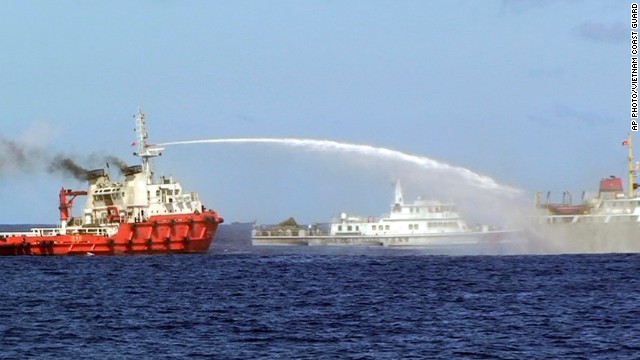 A Chinese ship, (left) shoots water cannon at a Vietnamese vessel (right) while a Chinese Coast Guard ship (center) sails alongside in the South China Sea off Vietnam’s coast, Wednesday, May 7, 2014

The spokesman of Vietnam, Le Hai Binh, said in a statement Vietnam “resolutely opposed” the Chinese company’s drilling. But, like other Asian nations involved in territorial disputes with China, Vietnam appears to have limited options when dealing with the emerging superpower 14 and Vietnam, unlike the Philippines and Japan, has no formal defence agreement with the US.

The US remains rather passive althought it reaffirmed formal defence ties with Japan and the Philippines, but it does not take any position on which country owns the collection of islands. It seems they don´t want to become directly involved in the disputes.

Although the UNCLOS treaty rejects “historically based” claims and China has ratified UNCLOS, it alleges to have “plenty of historical and jurisprudence evidence to show that China has sovereignty over the islands in the South China Sea and the adjacent waters”.15. The vast majority of international legal experts have already concluded that China’s claim to historic title over the South China Sea is invalid. 16 If China´s claims are invalid, whose claims are seen valid? Even legal experts find it difficult to agree upon this. It all depends which sources they use, if they use UNCLOS and how they assess the territory and if they see the islands as islands or not. How to evaluate this complex issue depends on a lot of factors.

These conflicts show that geopolitics isn´t off the table yet. In my opinion it is about time for a higher authority to deal with it. Tensions have already risen to a point where the situation could easily get out of control.Fact is that the whole dispute hampers also economic growth as no country can make proper use of the resources of that region. China is on the way to take what it wants with force.

All involved countries – except Brunei – have ratified UNCLOS. The answer is therefore right here: use the jurisdiction of the International Tribunal for the Law of the Sea. China would probably come away empty-handed, what is probably why they fear to have the court involved, but at least there would be legal certainty and hopefully peace. In for a penny, in for pound. The laws were set up to avoid or solve conflicts and should be used to do so now. China should accept that we are in the 21st century and maps, that were drawn centuries ago, do not prove ownership, but a court decision does. If China keeps on showing unwillingness to solve this legally, the court should administer justice without them. Otherwise this dispute might go on for years or escalate seriously and become a global affair. As the incident with the oil rig shows, China will extend its influence on the regions by force and their willingness to solve disputes on a bilateral basis are just lip services. Maybe it would also help with all the other disputes China has as it would force them to open up to negotiations.