President Obama, currently on a visit in Asia, arrived in Seoul to news that North Korea might initiate the next nuclear weapons tests.

North Korea´s nuclear program is a source of deep concern for the rest of the world and that North Korea is up to no good is shown by increased activity at its main nuclear test site as seen on images of spy satellites.

If this is just another provocation or if they are really preparing another test is not clear, but the regime expressed anger about Obama´s plans to visit South Korea. 1 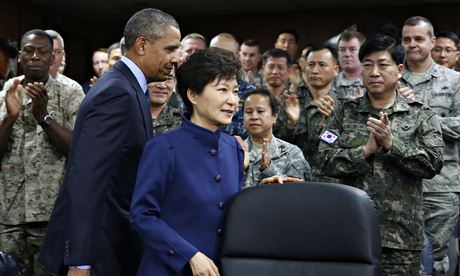 North Korea is the most isolated country in the world. International sanctions and condemnation have led to extreme suffering for its people.Threats will get North Korea nothing, other than greater isolation.  2

According to own statements, North Korea conducted already three nuclear tests successfully and would be able to carry out a new kind of test with a fourth nuclear device. 3

The history of negotioations with North Korea on giving up its nuclear program has been going on for decades. In 1985, North Korea joined the Nuclear Non-Proliferation Treaty (NPT) and during the years, it broke agreements and threatened several times to quit the program and demanded concessions until it finally withdrew the treaty in 2003.

The US were highly involved and one of the major influencer in negotiations. They imposed economic sanctions already in the 80s, lifted some after North Korea agreed to cooperate, but imposed further sanctions during the years when North Korea abode by several agreements and made excessive claims towards them. 4

In 2003, with the aim to find a peaceful resolution to the security concerns – North Korea declared for the first time it had nuclear weapons – the Six-Party-Talks with South Korea, Japan, the USA, China, North Korea, and Russia were established. These talks were also hindered repeatedly by North Korea with further missile tests and provocations. Progress halted after Pyongyang walked out of negotiations in 2009.

Under the new leader Kim Jong Un in early 2012, the nation announced that it would allow international inspectors to monitor the moratorium in exchange for food aid from the US. But further missile testing later in 2012 and in 2013 proved that North Korea would not stick to its promises. 5

The UN monitors and comments on actions of North Korea neatly. Several sanctions were imposed and tightened after its underground nuclear test in 2013. UN Sanctions include:

China, the North’s longtime benefactor, helped the United States draft the sanctions resolution in what outside experts called a sign of Beijing’s growing annoyance with Pyongyang’s defiant behavior on the nuclear issue. 6

As a result, the UN would be left with no choice but to slap even stronger punishments on the North to safeguard the peace of the region and the world. 7

Until now, North Korea has appeared pretty unimpressed by these sanctions. Why that is, is revealed from time to time. Kim Jong Un posed in front of a high-precision milling machine of a German manufacturer just recently in March 2014. Other photos also caused a stir when Kim visited a factory in 2013 as those pictures showed rotation rollers with which it is possible to produce rocket parts. This technology comes under the embargo and should not be found in a North Korean factory. Kim Jong un standing in front of a factory – a Mercedes can be seen in the background.

A third example of technology that should not be found in North Korea are parts that were found in a rocket of the type Unha-3. The 14 parts, from computer chips to ball bearings, came from Russia, Great Britain, Switzerland, and the USA. UN-investigators found out that some of the parts were provided by a Taiwanese trader. The origins of the other parts are still unexplained.

Luxury goods also come under the embargo; yet Kim owns the newest model of the Mercedes S-Class and his generals have a fleet of brand-new Mercedes 600. From where he got them remains also unclear.

These are not the only examples for luxury goods that can be found in Pjöngjang. Kim´s wife, for instance, wears the newest designer clothes and on Kim´s desk are Apple computers and smartphones. On Pjöngjang´s roads, Hummer luxury-jeeps and Audi cars can be spotted and their fitness clubs have the newest equipment from the USA.

In fact, it seems rather easy for Kim Jong Un to acquire the goods he wants and needs. The UN embargo list is sketchy and leaves room for interpretation. Is a scarf a luxury good or is it a commodity? Different countries, different interpretations. Whereas Australia would not deliver, Russia would as they deliver everything except fur coats with a value of more than 5,000 Euro (6,900 USD). 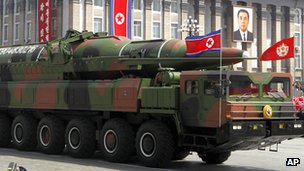 Lastly, there are also the countries that still carry on commerce with North Korea like China, Russia and Cuba without much hesitation. 8 China seems to have realized that they are fostering an erratic state, but Russia signed an agreement on trade an economic cooperation just recently at the end of April.
9

Kim acts up with the international community. Not only that he shows us that the sanctions and embargos fail in their effects, it is also very alarming that we do not exactly know what technology he owns.

Prime Minister Park suggested to impose stronger punishments on North Korea without saying what this could be. Obama predicts that North Korea´s threats will only lead to more isolation, but how will he make sure that the countries which are currently trading with North Korea stop doing it? Banning all trade with North Korea would only minimize the problem as they proved that they are able to “smuggle” goods past UN inspectors.

To make it impossible for Kim Jong Un to go on like that would mean that the whole world community has to work together. Safety of all states against nuclear weapons should rank higher than economic interests and obtaining profits out of trade with this unpredictable country. Not only that Russia and China, amongst other countries, endanger other states, they also put themselves in a very bad position as missiles from North Korea would reach them easily.

A first step could be that the currently sketchy embargo list gets overworked, It needs to be defined what is meant with “luxury goods” as every country defines it differently. Sensitizing custom officials and rather withholding goods sent to North Korea until it is clear that they cannot be used for military purposes will hamper acquiring goods for them. 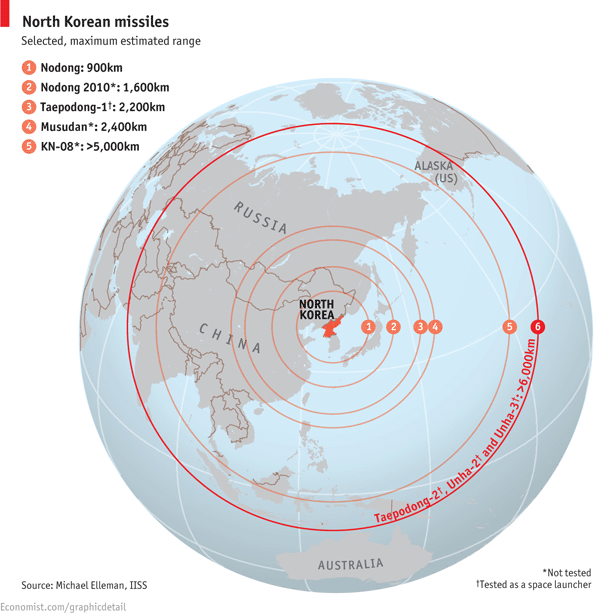 With the current Ukraine-crisis, Russia has other priorities and I also do not see the willingness to do the world community a favour by stopping to trade with North Korea. China, as North Korea´s most important sustainer and trading partner, has some way to go but finally, rethinking takes place. The development is probably too slow and it might be already too late as North Korea might have piled up enough technology to build nuclear weapons.

The few glimpses officials had into the country also do not reveal any signs of reservations from the citizens or other officials against Kim´s plans for further tests.

In my opinion, the UN should stop watching the situation getting out of control. North Korea ridicules the whole system and we should not forget that it is not just a child with bad manners that throws a tantrum, They can´t be trust and have probably weapons that are highly destructive and they might indeed carry out their threats one day. They have been given already too much time.

The UN has more possibilities than sanctions and embargos in case that a state poses a threat to peace and acts aggressively. If communication and diplomatic measures fail, something different has to replace it to protect the world from nuclear-weapons. I am usually completely against the use of force and violence. However, In this case it nearly seems inevitable.