Before I left for my internship in Australia, I went to see my grandmother to say good-bye. As usually when I meet her, she asks me when I intend to settle down and have children. I hate this question because it is not easy to answer as today there are more options to decide on than “when?”.  Nowadays, it is predominantly the question “do I want at all?”.

This reminded me of a documentary made by the BBC, I watched a couple of weeks ago.  The documentary “No sex please, we´re Japanese” 1 points to different issues why the birth rate in Japan declines heavily and some of them blew my mind. You think that many developed countries have the same problem? You are right, but with Japan the reasons are a bit different and the consequences are way more severe.  But why?

At first we should have a look at the statistics. Since 1975, the number of babies born in this country is declining, and this trend is accelerating on a fast pace. 2

To maintain the population at a stable level, every woman needs to give birth to two children, but the statistics indicate that there are only 1.39 births per woman. 3 4

Currently, the death rate is higher than the birth-rate which leads to a total decline in the population of one per cent annually. 5 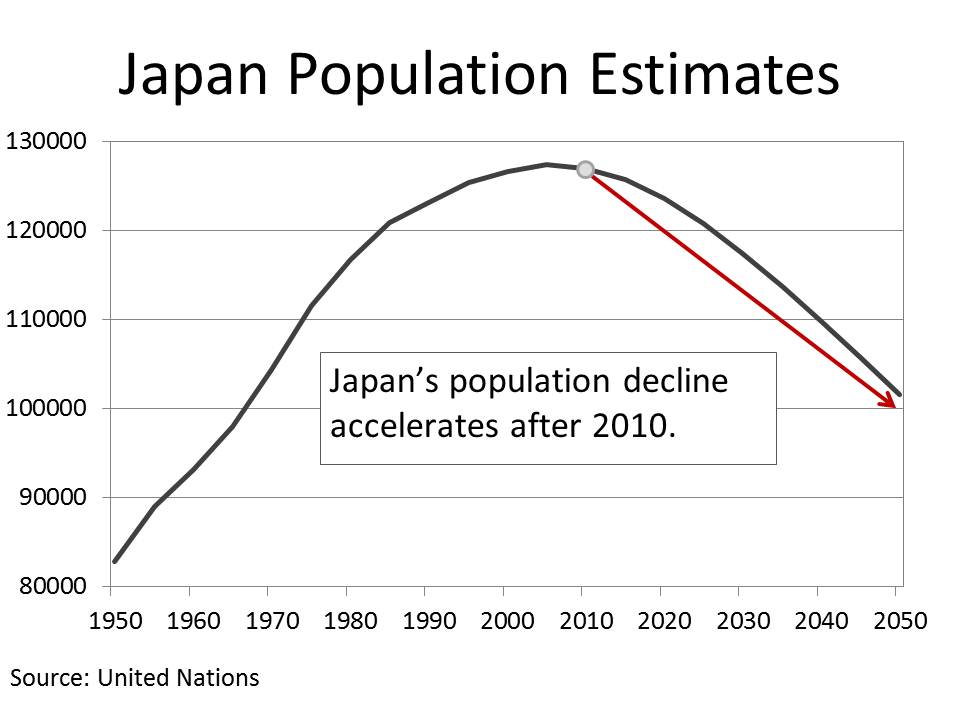 It is going downhill!

This is a catastrophe for Japan as it has one of the highest government debt rates of the world. 6 A simple illustration of the consequences is: fewer children mean fewer workers and fewer workers mean fewer taxpayers in the future. Another economic reason is that, at some time,  there will not be enough people to do all the work.

What exactly is happening? According to several researches, there are a number of reasons why fewer babies are born. The first reason is the same as European women suffer from: incompatibility of career and family and the will to personal fulfillment. Japan’s hard-work culture makes it nearly impossible for women to work while having a family. Child-care is scarce and work-culture requires very often working more than 50 hours per week.

Secondly, and this is mostly fascinating – well, not in a positive way – Japanese women and men are drifting apart. Several very rigid traditional reasons and newly developed issues are playing roles which are a unique problem for Japan.

Until the 1970s, marriages were usually arranged and men simply do not know how to approach women and back away from dating. Fewer people are getting married, births out of wedlock are stigmatized and this means without marriage no kids.7

And now it gets really interesting. Researchers believe that Japanese people have lost interest in sex at all. Only to mention a short excerpt of the research: nearly half of the women, aged 16 – 24, have no interest in sex, a quarter of men feel the same. 8 This is so mind-blowing as in many cultures people are bombarded with sex. Sex sells, is regarded as one of the main drivers of humankind – next to might and money, and you probably kept reading because the word appeared in the beginning? At least it was the first word my fellow students read when they peeked over my shoulder to have a look on what I was writing. So, how can a whole nation lose interest in something that has such an important status in other cultures?  And what are they interested in instead?

Actually, Japanese men do have relationships. Just not with real women. There is a geek and Manga scene in Japan and men prefer to foster relationships with virtual girlfriends instead of dating real women 9. If there is no attraction for each other at all, how would you increase the birth rate and save Japan from becoming extinct?

This question kept me busy while driving back home after I dodged the inconvenient questions of my grandmother.

What could you do to encourage citizens to have more babies? Many governments have already tried to solve this problem. For many,  the solutions are monetary incentives like child-care allowances and tax reductions for families. But this has not proved to be very successful and I think the same would be applicable to Japan when looking at the given reasons.

As the root of all evil is that Japanese men do not know how to date women, maybe they need to work on this and offer dating courses at school from an early age on? Women also complain that men behave chauvinistic and do not help with chores at home. The school-system could be altered in a way that men learn how to cook and wash to become better husbands. If men know how to approach women and women think they might be a suitable partner for life, the problems should be nearly solved, correct?

If this fails and you cannot stimulate the willingness to reproduce, maybe you have to find other ways of maintaining a stable population? Immigration might be a suitable solution.

Many other countries like Australia and European countries are following this strategy and try to attract immigrants. The obstacle here would be that Japan has a much closed society and it seems that immigrants are not very welcome and hurdles to immigrate are high. 10 There are only approximately 2.5 Million foreigners which are around 3.5 % of the whole population. As a foreigner, you might feel really lonely and probably not be able to integrate.

The fact is, the government knows about the problem, but it does not seem as if they have found an answer how to tackle it until now.

In any case, changes in policies need to be made, either internally by stimulating the willingness to have children, or by having a look outside and try to attract immigrants. In my opinion,  a combination of both would be the best way as both strategies would need some time to create a significant change. Less kids means also less people who could have children in the future, these people will also have less children … this is a vicious circle and needs to be broken. The earlier, the better. Therefore it would be good to attract immigrants in an age in which they already have children and/or might have children in the near future and also give incentives to younger Japanese at the same time. That means that different departments in the government have to come up with suitable bills and the attitude towards immigrants within the country needs to change. They should not see them as a threat, more as an investment in Japan´s future.

Thinking about a solution made me nearly forget what is important for me at the moment. I  must postpone saving Japan for now as I have to prepare my year abroad and I am probably not the best counselor in these matters anyway. My grandmother also has to wait some more years until I finish my studies. By then, I might be able to answer her questions or I have found a solution to Japan’s problem … we´ll see…

If this was interesting for you, you might also consider to read the Blog of my valued fellow student Joris Wigger. Sometimes the solutions are so near …